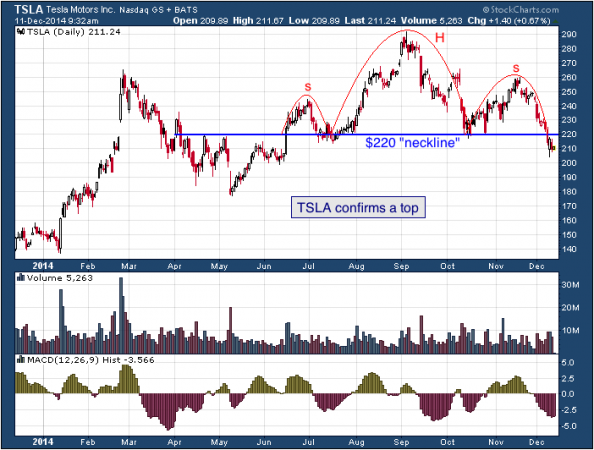 Over the last 5 months TSLA has created a key level of support at $220 (blue), which was also a prior resistance, and that level was also the “neckline” support for the stock’s head and shoulders (H&S) reversal pattern. Above the neckline you will notice the H&S pattern itself (red).
Remember, patterns such as an H&S need to confirm to have the meaning that they imply. Confirmation of the H&S occurred when TSLA broke below its $220 support.
The Tale of the Tape: TSLA has confirmed a head & shoulders pattern. A short trade could be entered anywhere near $220 with a stop placed above that level. A break back above $220 could negate the forecast for a move lower, thus a long position could be considered instead.
Please share this article
at 12:04 AM No comments:

Podcast: Where Oil Will Bottom & Where The Opportunities Lie

Sumit Roy and Drew Voros discuss the continued decimation of oil prices. (length: 7:17)
HAI's podcast is posted every Monday and looks back at the previous week's moves in commodities. Halliburton laid off 1,000 workers in its Eastern Hemisphere division on Friday.
Many assume oil prices have the multi-national conglomerate spooked that it will need to cut its prices or face non-payment by oil drillers.
Several Energy and Capital readers have emailed us expressing similar concern for their own oil investments.
Most queries sound something like this one from Beth in New Hampshire: "I've been putting money into Continental for the last two years, do you think I should cut my losses?" (more)

It has been a tough several years for mining stocks.
Investors saw spectacular gains up through 2010, when things started getting ugly. Mining stocks are extremely volatile, so it isn’t always a pretty picture when metals are not in a bull market.
Junior mining companies — smaller companies that explore new mines for new deposits — are even more volatile. Of course, if they do strike gold, they can be incredibly profitable.
I generally consider myself a conservative investor. I recommend a well-diversified portfolio for the majority of your financial assets. But it’s not a bad idea to have some speculative plays in your portfolio to give yourself an opportunity for huge gains. (more)