Is This Crisis About To Send The World Into Turmoil?

kingworldnews.com / January 28, 2015
As the crude oil market continues to struggle and worries about Europe intensify, today one of the legends in the business sent King World News a warning about a developing crisis that could send Europe and the world into turmoil.
Portion of Art Cashin’s note today: Greek Markets In Turmoil – Things in Athens continue borderline chaotic.  The Greek stock market is down the equivalent of 2500 Dow points since Friday.  Here’s a nice synopsis from my friend Peter Boockvar over at the Lindsey Group:


Any thought of pragmatism from the newly elected Greek government is quickly being thrown out the window. But, when you elect Marxists, this I guess is what you get. Greek capital markets are under major stress again today as they are losing faith that the negotiated process from here on with debts and budgets will go smoothly.

As the bankers keep assuring the world that all is well–why are government bond yields nil to negative and central banks buying up dodgy debts all over the world then?–anyway, as the bankers push the ‘America is a self-sustaining engine of global growth’ meme, Dr. Copper appears to be cracking under the weight of weak demand. Today moving below $2.50 a pound, as it did last entering the 2009 recession, secular support lies some 40% lower in the $1.50/pound range. 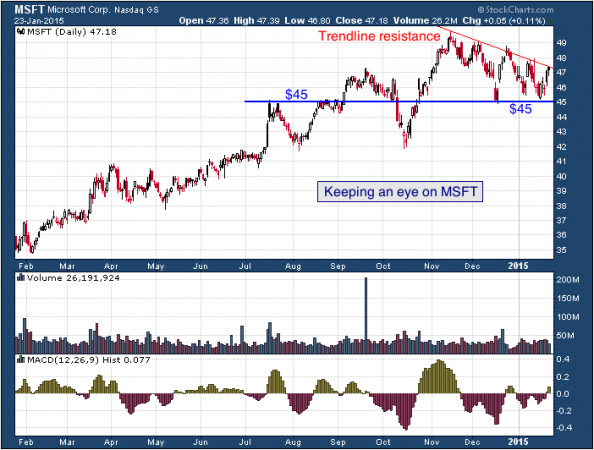 Over the last 2 months, MSFT has been consolidating between a couple of important price levels. First, MSFT has formed a clear support level at $45 (blue), which was also a key resistance last year. In addition, the stock has also been forming a down trending resistance level (red). These two levels combined have MSFT stuck within a common chart pattern known as a descending triangle that will eventually have to break one way or another.

goldsilverworlds.com / January 27, 2015
By GoldStockTrades.com:
The Junior Gold Miners (GDXJ) ETF is bouncing off support at the 20 day moving average showing some bullish support and accumulation. Gold is holding the $1300 area showing a major January bounce which may forecast a powerful 2015. As the old saying on the market teaches, “As January goes, so goes the year.”