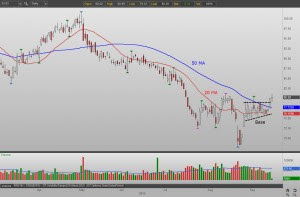 Source: OptionsAnalytix
One of the best-looking names among big-cap energy stocks is EOG Resources (EOG). Its bottoming process is the most developed of the bunch making it one of the first oil stocks to reclaim the higher ground.
With yesterday’s oil pop, EOG stock was able to vault back above the pivotal 50-day moving average — a level it hasn’t seen since April. The sideways base formed prior to this week’s breakout illustrates the bears’ impotence. Despite multiple attempts to take EOG stock lower in recent weeks, each and every selling raid was rebuffed rapidly by buyers.
While the bottoming attempt in EOG may yet experience a few setbacks, now is as good a time as any to dip your toes in the water.
Buy the Jan $80 calls for $6.30.  (more)
at 12:03 AM No comments: Links to this post 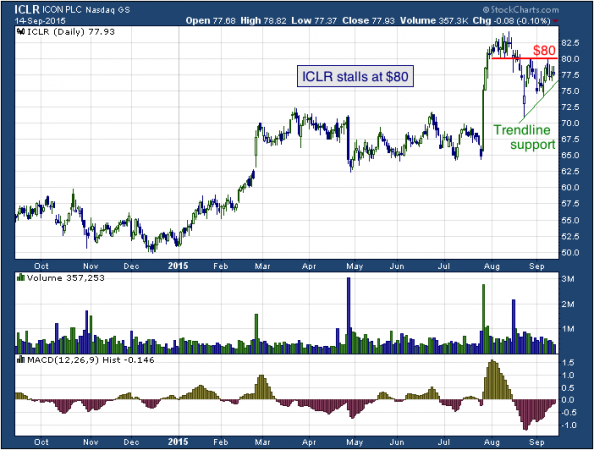 ICLR has formed a clear resistance at $80 (red) over the last month, and that $80 level has also been support prior. In addition, the stock has been climbing a trend line of support (green) since the end of August. These two levels combined have ICLR stuck within a common chart pattern known as an ascending triangle. Eventually, the stock will have to break one of those levels.

The Tale of the Tape: ICLR is trading within an ascending triangle. A long trade could be made at the trendline support or on a break above $80. A break below trendline would be an opportunity to enter a short trade.
at 12:03 AM No comments: Links to this post