Today billionaire Eric Sprott stunned KWN when he spoke about how investors can make a staggering 3,000% in less than a year. Sprott called this “the greatest” investment opportunity he has ever seen in his life. He also spoke with King World News about the unprecedented events that are taking place in the gold and silver markets. This is the first in a series of interviews with Sprott that will be released today. Below is what Sprott, who is Chairman of Sprott Asset Management, had to say in part I of this remarkable interview series.
Sprott: “I think the most important thing that your listeners (and readers) would want to understand is that we have a bull market in silver stocks — they are up about 50%, we’ve got a bull market in gold stocks — they are up something approaching 30%, we have a bull market in silver — it’s up over 20%.
Continue Reading at KingWorldNews.com…
Please share this article
at 12:07 AM No comments:

Singapore Source – West Is Now Running Out Of Physical Gold

Eric King: “When the United States closed the gold window in 1971, gold proceeded to go up six-fold in a very short period of time. But during the 1970s, from time-to-time there were threats from the IMF that they were going to sell some gold to stem the rise in the price. We see all of this gold pouring out of the West, and now there is this pressure on India to lease their 200 tons of gold. Does this have a 1970s feel to it to some degree?”
Williams: “There are two major differences now, Eric: The first big difference is that the sellers have been selling gold. And when you have a finite resource, it’s not like dollar bills — you can’t just print more. If you keep selling, one day you are going to have sold it all and you are not going to have any more to sell….
Grant Williams continues @ KingWorldNews.com

Loonie melting in the August heat

As we had thought likely, the Canadian dollar has fallen more than 10% against the greenback since the commodities rebound peak in 2011, and this week, is trading well below the QE trend line with very little technical support between the present level around 95 and its secular support since 2002 at 90 (marked below). Given deflating demand in Canada’s credit-heavy domestic economy, a weaker Loonie will help make exports more competitively priced in the battle with other countries amid contracting global demand.
Since the commodity super demand cycle burst in 2008 with the credit bubble, and the commodity super speculation cycle burst in 2011 with the QE bubble, we think it likely that the Loonie may well breach its secular support and trade below 90 in the coming weeks and months as global growth comes in softer than the many permabulls have forecast. 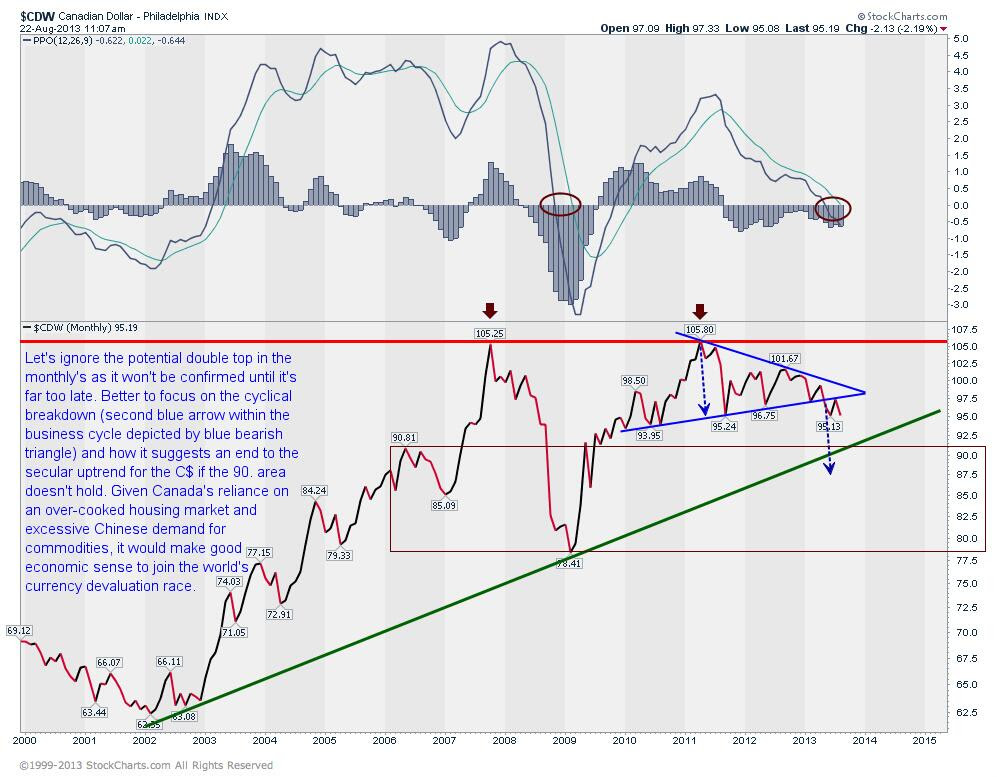 Britain's Trillion Pound Horror Story explains and analyses in plain language the UK's large and ever growing national debt, possible bankruptcy, gigantic and inefficient public sector, and the Conservative-Liberal coalition government's half hearted attempt at trying to reduce the deficit.

Produced and directed by Martin Durkin, all rights reserved for the creators of the show, I do not own any of this material.
Please share this article
at 12:05 AM No comments:

Is a Relief Rally Due for Bonds and Yield Stocks?

To sustain a panic, it takes a lot of energy, a constant flow of fear and confusion to power the flight instinct.
In the bond market, the panic that has sent interest rates surging has certainly fed on plenty of worry and has already carried on a long time. The yield on the 10-year Treasury note has shot from 1.63% in early May to a two-year high above 2.90% this week, scaring tens of billions of investor dollars out of bond funds and raising the price of credit across the economy.

The move from historically low rates to something closer to “normal” levels has been driven by better confidence in U.S. economic growth and the related guidance by the Federal Reserve that it intends, before long, to scale back the pace of its bond-buying stimulus plan from the $85 billion monthly clip it’s employed since September.  (more)
Please share this article
at 12:04 AM No comments:

While most Fed pundits are focusing on the Arvind Krishnamurthy paper referenced earlier discussing the Fed’s “optimal exit” options, another paper, one by Robert Hall of the Hoover Institution and Stanford titled “The Routes into and out of the Zero Lower Bound” may be worth a perusal. The main reason is that while the author admits QE has been largely a failure for the mainstream economy (“the United States and most other advanced countries are closing on five years of flat-out expansionary monetary policy that has failed in all cases to restore normal conditions of employment and output“) in part due to a collapse in collateral values, and in part due to no capex spending as we have warned for the past two years, i.e., “the combination of low investment and low consumption resulted in an extraordinary decline in output demand.”
Continue Reading at ZeroHedge.com… 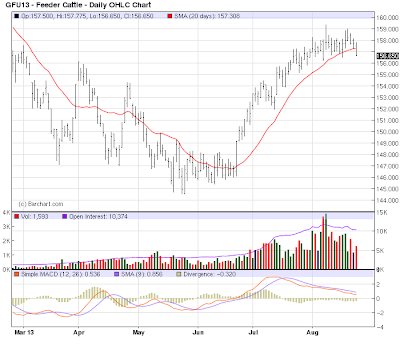 U.S. feedlots reduced the number of cattle added to their herds by 10.4 percent in July amid tight animal supplies after the worst drought since the 1930s spurred higher feed costs.

About 1.722 million head of cattle were moved into feedlots last month, down from 1.922 million in July 2012, the U.S. Department of Agriculture said today in a report. Thirteen analysts surveyed by Bloomberg News projected a 1.6 percent drop, on average. The feedlot herd totaled about 10 million as of Aug. 1, down 5.9 percent from a year earlier. Analysts expected a 4.2 percent slump. (more)