kingworldnews.com / July 23, 2013
Today 50-year veteran Art Cashin warned about major concerns in the gold market because of declining gold inventories.  Cashin, Director of Floor Operations at UBS ($650 billion under management), also cautioned about the backwardation in gold, and noted the massive global demand as well.
Art Cashin:  “All That Glitters Is Not Arbitrage – Monday, spot gold spiked up $45 and the media pundits pointed to things from China to the FOMC.  While all the cited may have been factors, veteran traders saw the bulk of the move resting in a conspiracy story.
In my mid-day email to friends I had noted this:


Gold soars as NYT story on metal warehouses fans flames of conspiracy theorists that gold warehouse
stores have been “lent” out.  That theory also aided by backwardation (spot price far above near future).

READ MORE
Please share this article
at 12:07 AM No comments:

VIVUS, Inc., a biopharmaceutical company, engages in developing and commercializing therapies to address unmet needs in obesity, sleep apnea, diabetes, and sexual health. The company offers Qsymia, a drug for the treatment of obesity as an adjunct to a reduced-calorie diet and increased physical activity for chronic weight management in adult patients with an initial body mass index of 30 or greater, or 27 or greater in the presence of at least one weight-related comorbidity, such as hypertension, type 2 diabetes mellitus, or high cholesterol; and STENDRA for the treatment of erectile dysfunction. It also completed Phase II clinical studies of Qsymia for the treatment of obstructive sleep apnea; and Qsymia for the treatment of type 2 diabetes. The company has an agreement with Mitsubishi Tanabe Pharma Corporation for the development and commercialization of avanafil, a PDE5 inhibitor compound for the oral and local treatment of male and female sexual dysfunction. VIVUS, Inc. was founded in 1991 and is headquartered in Mountain View, California.
To analyze the company's stock for potential trading opportunities, please take a look at the 1-year chart of VVUS (VIVUS, Inc.) below with my added notations: 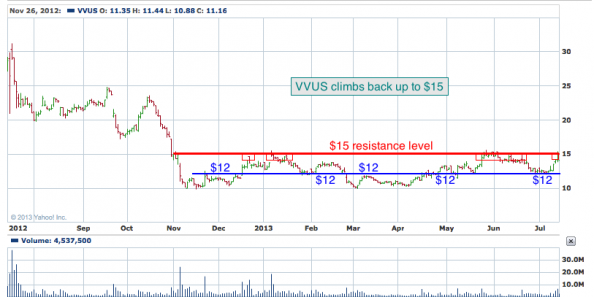 VVUS has been trending sideways for the last (8) months. As the stock has bounced along, it has formed a couple of key price levels to watch. The first is the strong $15 resistance level (red). The other is the key level of $12 level (blue) that has acted as both support and resistance and VVUS just recently bounced off of.
The Tale of the Tape: VVUS appears to be on its way back up to $15. A long position could be entered at the $12 support or on a break above the $15 resistance, with a stop placed below the level of entry. A short play could be made on a break below $12 or on a rally back up to $15.
Please share this article
at 12:06 AM No comments:

The Gold Report: Federal Reserve Chairman Ben Bernanke indicated last month that the Fed would begin to taper quantitative easing in September. The equity markets responded quite negatively to this. In the wake of this response, do you think the Fed is committed to this new policy?

Eric Coffin: I think the Fed is committed to tapering, but I suspect it will happen a little more slowly than some people think. Bernanke's quite cognizant that when he does taper it's going to have an impact on the markets. But you can't keep buying $85 billion worth of bonds a month forever. Bernanke has backed off a bit himself on this issue and was back to using 6.5% as his unemployment target. If the U.S. keeps creating jobs at the pace of 175,000 to 200,000 per month, it will take a long time to get unemployment to 6.5%—probably 18 months or more. (more) 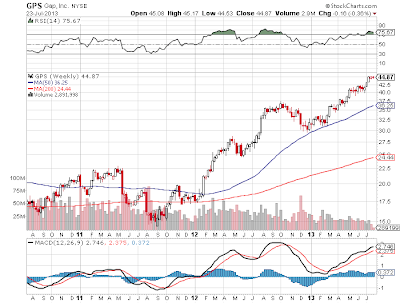 If you’re currently looking for stocks to buy, now’s a great time to take a close look at retailers.

And that has given their stocks a significant boost.

The Spider S&P Retail ETF (NYSEArca: XRT) proves that American shoppers have bounced back from the economic malaise. 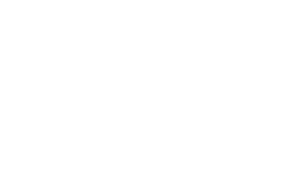 Click to Enlarge
On the multi-year chart, two things stand out.

First, while not quite there yet, the stock is slowly but surely moving toward a major resistance area closer to the $27 mark, which is where the downtrend line off the 2000 top comes into play. Given how long this downtrend has been in the making, we must give the resistance area some breathing room. Thus, I am circling $26.90 to $28 as the next major resistance area, which would also coincide with the 61.8% Fibonacci retracement level from the October 2007 highs down to the early 2009 lows.  (more)

While Jim Sinclair was admittedly several months early in calling a bottom to the current gold correction, few if any today understand the FUNDAMENTALS for gold today as well as Mr. Gold.
With gold notching its biggest up day in over 13 months Monday, trading up $40 to over $1340, Sinclair has alerted readers that the GOFO holding negative 11 days and counting is screaming the truth that that there is no meaningful above ground supply of gold.
As a consequence, Sinclair states that the COMEX will be forced to move to cash settlement for gold contracts within the next 90 days, and that the chaos resulting from the COMEX changing their spot contract settlement could result in multi hundred dollar days to the upside for gold!
Read More @ SilverDoctors.com

Netflix Owns Nothing, Is Poised for Short-Term Drop: Pachter 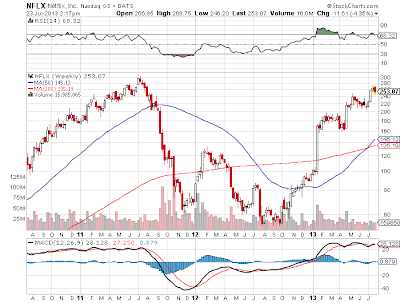 Given the fact that Netflix (NFLX) shares have gained 180% this year and is the hottest stock in the S&P 500 (^GSPC), it would not seem out of line to suggest that they were also a bit expensive. Okay, really expensive, with a forward price-to-earnings ration of 150!

But even if this red-hot stock was suddenly cut in half, there's one bear on the street who would still see downside in a company he says has no control over its content costs.

"They own nothing and they've acquired nothing," says analyst Michael Pachter of Wedbush Securities who raised his price target on Netflix to $80 from $65 today but kept his "sell" rating.

Contrary to common belief, Pachter says Netflix's highly acclaimed original content and top-rated shows are merely licensed on an exclusive window. "They have the rights to show the stuff for two years and that's it. They don't own Arrested Development. They don't own House of Cards. They don't own Orange is the New Black."

And here's the catch, Pachter says, and the reason why Netflix's future looks so rocky to him: "Unlike HBO, which owns The Sopranos, when Netflix decides they want to show these shows again in three or four years, Netflix has to pay again, HBO doesn't."

To be fair, even Pachter has to concede that the streaming media outfit is continuing to add subscribers and deliver profits, it's just that he doesn't think their profit growth is dramatic enough to justify its rich multiple and $250 share price.

As he sees it, to truly thrive, Netflix would need to raise its monthly subscription fee to $12 or $15 a month from $8 currently, but warns that such a move - while hugely beneficial to the bottom line - would cost the company as much as one-third of its 29 million customers.

"80% of the subscribers we surveyed said (Netflix) was priced correctly or too high already," Pachter says, adding that about the same percentage said "they wouldn't stick around for any price increase, not even a dollar."

For the record, Factset data shows Pachter is one of nine analysts who currently rate Netflix a sell, while the remaining 75% analysts rate it either hold or buy and have a median price target of $213.
Please share this article
at 12:03 AM No comments: