by Thomas Pascoe, The Telegraph:

One decision stands out as downright bizarre, however: the sale of the majority of Britain’s gold reserves for prices between $256 and $296 an ounce, only to watch it soar so far as $1,615 per ounce today.

When Brown decided to dispose of almost 400 tonnes of gold between 1999 and 2002, he did two distinctly odd things.

First, he broke with convention and announced the sale well in advance, giving the market notice that it was shortly to be flooded and forcing down the spot price. This was apparently done in the interests of “open government”, but had the effect of sending the spot price of gold to a 20-year low, as implied by basic supply and demand theory.

Second, the Treasury elected to sell its gold via auction. Again, this broke with the standard model.

The History Of The Federal Reserve System

For better or mostly worse, the Federal Reserve has been governing the monetary system of the United States since 1914. The visual history below maps the rise of the Fed from its origins as a relatively minor institution, often controlled by Presidents and The Treasury to its supposedly independent and self-aware current position as, arguably, the most powerful entity in the world. And because we always like to be 'fair-and-balanced' we juxtapose this clarifying truth of the maniacal growth of the Fed's balance sheet and shift from passive to hyperactive - highlighting every major macro-economic and political event on the way - with G. Edward Griffin's 1994 speech on 'The Creature From Jekyll Island'. (more)

SMART MONEY IS EXTREMELY WORRIED ABOUT WHAT LIES AHEAD & MORE – Dr. Stephen Leeb

“When you have dollars being printed, euros being printed, the only thing that can withstand the debasing of these currencies are real things (hard assets). The two commodities that he’s singled out were gold, which he said is going much higher, and oil.

I would have to agree with that, Eric. At least that’s how I see the world. His basic premise is that debt levels of consumers in the developed world are so high, that there is no way out. You are not going to be able to grow your way out without inflation.

The Impact of Inflation and Deflation on Gold

Gold did not manage to stay above $1,600/oz in Asian and European trading this morning, and is currently trading at $1,595.90. Gold is still up from a recent low of on the 28th of June at $1,552 oz. Key US employment data is due to be released later today.

Following yesterday’s WGC reports about the role of gold in investment portfolios, this report looks at gold’s performance during inflationary and deflationary times. Gold, non-perishable and limited in supply, is seen as relatively immune to inflation, financial crises and credit default. Topically, periods of negative real interest rates are thought to support the demand for gold, because the opportunity cost of holding gold decreases when real interest rates fall. Weak dollar has also been seen to drive up the price of gold.

'The mob learned from Wall Street': Eliot Spitzer on the 'cartel-style corruption' behind Libor scam

AGFLATION: This essential commodity has now topped its 2008 highs

The drought across the U.S. continues to cause havoc, driving agricultural commodity prices higher. Corn futures hit a record today, exceeding their 2008 highs.

Reuters: - The hot, dry weather prompted analysts to reduce corn yield estimates, pointing to a smaller crop in the world's No. 1 grower than had been expected. In a Reuters poll Tuesday - the day after the U.S. Department of Agriculture (USDA) reported on crop conditions - analysts on average pegged the U.S. corn yield at 153.4 bushels per acre, down from 157.3 bushels a week ago.

The forecasters are predicting... 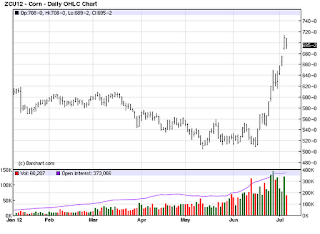 But like fireworks, will they fizzle out with a lot of oohs and applause?
Yesterday afternoon I ventured out in the 103 degree Kansas City heat. I wasn't headed for a fireworks display, but out for supper. It is the first time on the Fourth of July that I didn't grill out. With as many people sitting in the very cool air conditioned restaurant, I wasn't alone. It is likely stores have bags of charcoal that will go on sale soon to clean up inventories. As I was walking into the restaurant, a young boy, I guess around four or five asked his father, "Is it OK to say it is darn hot?" I wanted to answer for the father and say it was not only OK to use darn, but use it along with a lot of other words not acceptable to say in public. His father said, "Today it's OK."
The heat in the Midwest is oppressive. Roads are hot. Buildings are hot and there is no other way to put it. Records for high temperatures and for the days in a row over 100 degrees have been broken in most Midwestern large cities and for the next two to three days it may get a little hotter, before a front breaks the heat over the coming weekend into next week. If corn and soybeans aren't under irrigation, and in the areas that haven't received rain for two to three weeks, they are in trouble.
However, last week when I asked for comments and pictures of corn and soybeans, the calls and emails I did receive were from areas of the Midwest where crops are doing well. For some unknown reason, and I can't explain why, I didn't hear from farmers where crops are suffering and are poor to very poor. Of course, I have clients in areas where I know crops are poor, and because I live in Missouri, I am living in one of the hottest and driest areas day after day. But, I did want to see and share areas where it is the worst. After all, misery loves company. (more)
at 12:03 AM No comments: Links to this post