As readers of Top 10 Stocks already know, Chief Strategist Paul Tracy recently handed over the reins to Elliott Gue, one of the most widely followed investing strategists in the United States.
Why the change? During the past three years, StreetAuthority's global readership has increased by several million people and the paid subscriber base has more than doubled. StreetAuthority and its sister sites, InvestingAnswers.com and ProfitableTrading.com, now reach more than 3 million investors each month.

All of which made Paul realize he needed to devote more of his time to managing the frenetic growth of the company he co-founded. And that, in turn, meant reducing the load of his other day-to-day responsibilities, including directing Top 10 Stocks.

It's not hard to see why Paul hand-picked Elliott to be his successor. Elliott has appeared on CNBC and Bloomberg TV, and has been quoted in a number of major publications, including Barron's, Forbes and The Washington Post.

Elliott's expertise and track record of success have also made him a sought-after speaker at investing conferences and events hosted by the American Association of Individual Investors and others. (In fact, when I caught up with Elliott this week for the interview that follows, he was between speaking engagements at The World Money Show in Orlando.)  (more)

Traders Could Find 100% Returns in This Natural Resource 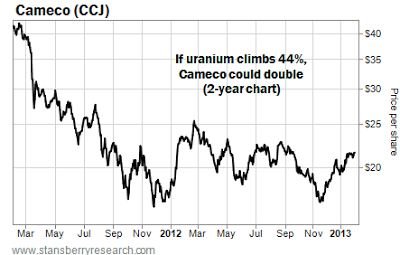 Over the next couple years, you could make low-risk, triple-digit gains in one of the most beaten-down commodity sectors in the world: uranium.

It won't happen overnight. But as I'll show you today, a big bull market in uranium is almost inevitable.
The price simply will not stay as low as it is today. And before the run is over, we'll see prices double... or more.
Let me explain...
Right now, the spot price of uranium is so low, miners are losing big money selling the stuff.
You see, it's not cheap or easy to pull uranium out of the ground. The mining costs alone are $85 per pound. Once you add in other expenses, it gets worse. As I told DailyWealth readers last month, the world's largest uranium producers are spending an average $106 per pound.
Areva, for example, produces 16% of the world's uranium. In 2011, it produced 23 million pounds of uranium... and spent almost $163 per pound doing so. That was, by far, the highest price I found among major uranium producers. But none of the numbers looked good.
Uranium spot prices are around $40 per pound. Long-term contracts might pay $65-$70 a pound. Areva is losing about $100 on every pound it sells. That's a great way to go out of business.
And that's exactly why this situation won't last. (more)

It is nearly impossible to talk about chart patterns on stocks without eventually discussing the very common head and shoulders (H&S) pattern. An H&S pattern is a reversal pattern that forms after an uptrend. A textbook H&S pattern starts to form when a stock rallies to a point and then pulls back to a particular level (shoulder #1). Next, the stock will rally again, but this time to a higher peak (head) than the previous shoulder. After forming the head, the stock will pull back to the same support as the first shoulder did. Finally, the stock rallies a 3rd time, but not as high as the head (shoulder #2). The level that has been created by all 3 of the pullbacks is simply a support level referred to as the “neckline”. The formation of an H&S pattern warns of a potential reversal of the uptrend into a possible downtrend.
As with any chart pattern, a trader will usually not want to act on the pattern until the stock “confirms” the pattern. Confirmation is the break of the key level that has been created by the pattern. In the case of an H&S, confirmation would be when the stock breaks the neckline (support).
What some traders do not know is that H&S patterns can also form upside-down after a downtrend as well. This pattern would be called an inverse head and shoulders. It would also be considered a reversal pattern, and the neckline would be a resistance rather than a support. To see such a pattern possibly forming, please take a look at the 1-year chart of CSTR (Coinstar, Inc.) below with my added notations: 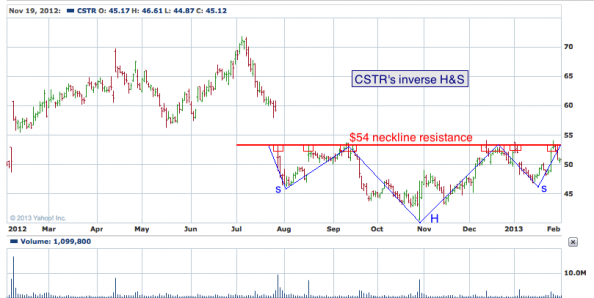 CSTR peaked at $72 in July and worked its way lower until October. The stock seems to be forming an inverse H&S (blue) since August. I have noted the head (H) and the shoulders (s) to make the pattern more visible. CSTR's neckline resistance is at the $54 level (red). CSTR would confirm the pattern by breaking up through the $54 neckline and the stock should move higher from there.
Lastly, keep in mind that simple is usually better. Had I never pointed out this inverse H&S pattern, one would still think this stock is moving higher simply if it broke through the $54 resistance level. In short, whether you noticed the pattern or not, the trade would still be the same: On the break above the key $54 level.
The Tale of the Tape: CSTR seems to be forming an inverse head & shoulders pattern. A long trade could be entered on a break above the $54 level with a stop placed under that level.

Today the Godfather of newsletter writers, Richard Russell, warned his subscribers “… the world’s supply of silver has grown dangerously low.” Russell also had some fascinating comments regarding gold, and stocks, including some great charts. Here is what Russell had to say: “If a problem has no solution, it may not be a problem, but a fact — not to be solved, but to be coped with over time.” (Shimon Peres) As I read the quote, I relate it to the FACT of the US’s debt. This is a situation that can never be solved honestly — it’s a fact. A fact that our children or our grandchildren will have to cope with. How they cope with it will set the course of the world of tomorrow.
The month of January was a winner, and according to Yale Hirsch (he edits the Stock Trader’s Almanac) if January is an up month the odds are that the rest of the year will also be up. Newspaper or magazine headlines seldom get it right, but courageous Barron’s keeps trying.”
Richard Russell continues @ KingWorldNews.com

Yet while many investors may be jumping into these products, some might not understand one of the biggest—and arguably most important—aspects of these types of funds, currency exposure. While this seemingly insignificant issue may be an afterthought for most, it can actually be a huge driver, or even the main determinant, of performance in a given time period.

That is because for American investors in foreign securities, returns consist of two components; the performance of the underlying stocks +/- the foreign currency impact.

Depending on how the dollar has traded, this forex aspect can result in a big difference when returns are repatriated back to dollars. If the dollar has strengthened against international currencies, total returns will be lower, while the opposite will be the case when the U.S. currency is facing global weakness (read Currency Hedged ETFs: Top International Picks?).

This is especially true when investors look at countries which have seen huge currency swings (relative to the dollar) in recent trading. Two important markets where this has been true over the past year are Brazil and Japan. (more)

Forget Gold Or Silver: This Metal Is Headed For A Classic Supply-Driven Rally : PLTM 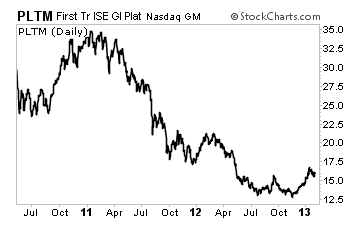 If you're thinking of investing in gold to hedge against runaway inflation, think again.

It's not that gold is a bad investment, but rather because there is an even better precious metal to invest in right now.

And no, it's not silver.

This metal will be one of the most sought-after in the next year. You see, not only is it a precious metal, it's also an industrial metal. It's best known use is in catalytic converters in cars.

And with Europe and other markets emerging from a recession needing new cars, I expect demand to pick up this year.

But that's just the start... supplies are also dwindling.

I am talking about platinum.  (more)
Please bookmark us
at 12:04 AM No comments: Links to this post

Tesoro Corporation, together with its subsidiaries, engages in refining and marketing petroleum products in the United States. It operates in two segments, Refining and Retail. The Refining segment refines crude oil and other feed stocks into transportation fuels, such as gasoline, gasoline blendstocks, jet fuel, and diesel fuel, as well as other products, including heavy fuel oils, liquefied petroleum gas, petroleum coke, and asphalt. This segment also sells refined products in the wholesale market primarily through independent unbranded distributors; and in the bulk market primarily to independent unbranded distributors, other refining and marketing companies, utilities, railroads, airlines and marine, and industrial end-users. It owns and operates 7 refineries with a combined crude oil capacity of approximately 675 thousand barrels per day. The Retail segment sells gasoline, diesel fuel, and convenience store items through company-operated retail stations, and third-party branded dealers and distributors in the western United States.
To review Tesoro's stock, please take a look at the 1-year chart of TSO (Tesoro Corporation) below with my added notations: 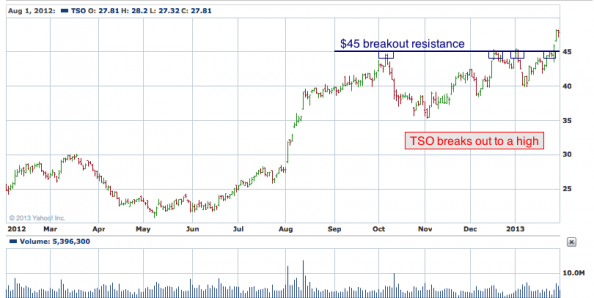 TSO has made rallied higher since bottoming back in May. For the last (4) months though, TSO formed a 52-week high resistance level at $45 (navy). Earlier this week the stock broke through that resistance on route to a new 52-week high. A pull back could provide a nice long entry on the stock.
The Tale of the Tape: TSO broke out to a new 52-week high earlier this week. A long trade could be made at $45 with a stop placed below that level. A break below $45 would negate the forecast for a move higher.

Watch the Dollar: It Could Trigger the Next Crisis 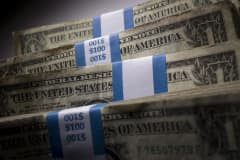 Expectations of an end to ultra-easy U.S. monetary policy are likely to set in during the second-half of 2013, triggering a bull run in the dollar that could last for five years, says independent economist Andy Xie. And this, he argues, could lead to a “crisis” in emerging markets as hot money inflows unwind.
The U.S. economy has begun to show signs of life again – with factory activity touching a nine-month high in January – prompting talks about an end to the Federal Reserve’s quantitative easing program.
Xie forecasts the dollar index – which measures the performance of the greenback against a basket of currencies – will rise to 100 in the next three years, a 25 percent rise from current levels around 80 on relative strength in the world’s largest economy.
Continue Reading at CNBC.com…