The world is running out of silver.

According to the USGS, 17 billion ounces of known silver supply remain in the ground globally–the troy ounces of silver equivalent of the 530,000 metric tons reported in the table below.

If all of the ore needed to recover this silver was mined and processed, the result would yield more than 2 ounces for every man, woman and child on the planet. Add silver to the supply of gold, above and below ground, and what unfolds is the obvious case for multiple, concurrent, free-floating choices in money—true mediums of exchange, which have never left worldwide circulation.

Possible Capitulation for The Little Guys?

Houston — From the Chart Book. As Vultures (Got Gold Report Subscribers) already know, because they have 24/7 access to all of our forty-something technical charts for gold, silver, mining shares big and small, our Vulture Bargain small resource related companies, etc., we reentered the Market Vectors Junior Gold Miners Index ETF (GDXJ) from the long side on April 10.

Just below is just one of the factors that led to our decision to attempt a reentry then. 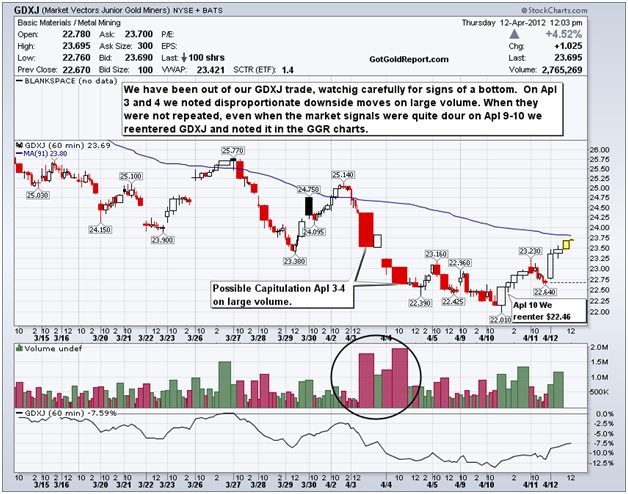 Naturally, as is our habit with all of our short-term trading positions, we have put in an appropriate new-trade trading stop, which we disclose and update in a dialog box in the GDXJ trading chart, which is also available to Vultures on the GGR Subscriber pages. 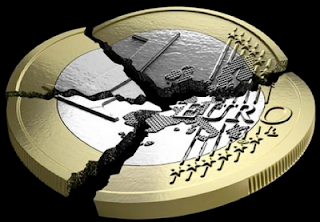 With renewed fears of Europe becoming a systemic risk to the global banking system, today King World News interviewed John Mauldin, President of Millennium Wave Securities. Mauldin spoke candidly with KWN about the crisis, how much has been printed and what to expect going forward: “$7 or $8 trillion (in printing) is probably where we are, but whatever the number is, it’s significant. Will Europe have to print a great deal more? The answer is absolutely. What’s that number? We don’t know. We don’t know for two reasons.”

John Mauldin continues:
at 12:06 AM No comments:

VIX Pattern Issued Buy Signal for Stocks – Will it Last?

The VIX has created a couple of never before seen patterns recently and it has been fascinating to see how stocks reacted. Before we talk about yesterday's sell signal (due to the inverse relationship between VIX and stocks, a sell signal for the VIX is an implied buy signal for stocks and vice versa), here are some of those historic oddities:

Stocks Dance to the Tune of the VIX

1) In mid-March, the VIX closed at 14.80, the lowest close since June 2007. This was significant for many reasons, one of them being that it closed below its lower Bollinger Band, which was the setup for a VIX buy signal.

The actual buy signal was triggered the next day. Unfortunately, there's no pure way to profit from a rallying VIX (I don't recommend VIX ETNs), but the March 13 ETF Profit Strategy update stated that:

"Being a contrarian after a rally like today is tough but often profitable. With the VIX near a 5-year low, aggressive investors may want to pick up some VIX calls." From low to high, the VIX rallied as much as 54%.

From Low to High

2) During its 54% rally from March 16 – April 10, the VIX (Chicago Options: ^VIX) recorded 8 consecutive up days. That's the first time ever (at least based on the data I have). Such a historic streak was highly unusual and unlikely to last any longer.

The April 10 ETF Profit Strategy update referred to this rare event and other technical indicators and predicted that: "Some sort of bounce (for stocks) is in the cards."

Stocks bounced and the VIX declined, in fact the VIX closed below it's upper Bollinger Band on April 9 (the set up) and triggered a sell signal (for the VIX) yesterday. Based on the VIX sell signal and other factors, yesterday's ETF Profit Strategy updated considered the odds of higher prices today at 65%.

The chart below highlights the recent VIX signals.

The key question now is whether stocks up trend has been broken for good. If it has been broken, this bounce will result in at least another leg down and much lower prices eventually. If it hasn't, stocks may rally to new highs.

With the S&P above trend line resistance and yesterday's VIX sell signal (buy signal for stocks) it's certainly not prudent to bet on lower prices. This however, could change quickly if the S&P falls below its crucially important trend line support.

The Great Collapse of the US Empire

The biggest story of the late 20th century was the collapse of the Soviet Union. After decades of a government controlled, centrally planned economy and outsized military expenditures the Soviet Union just one day ceased to be. Fast forward a few decades and now the biggest story about to happen in the early 21st century will be the collapse of the US empire for the exact same reasons.

The US economy has been centrally planned and manipulated by the communist fashioned central bank, the Federal Reserve, for 99 years now. But it wasn't until August 15, 1971 that the last linkage of gold from the US dollar was removed and the US Government and the Federal Reserve were allowed to truly run rampant with their anti-capitalist economic system.

A look at US Government debt since the beginning of the 20th century tells the story:

Just like the Soviet Union the US has also bankrupted itself on offense. Sorry, they call it defense even though all they do is attack and occupy other countries. The US spends more than the rest of the world combined on its military and spends $2,374 per capita each year. The next nine closest countries in military spending per capita average $80 per annum.

Yet millions of US citizens will rise to their feet and cheer as military jets streak overhead literally burning their money in front of their eyes. "USA! USA! USA... is bankrupt".

And, just like the Soviet Union, the US is destined to collapse. It is not an if... it's only a when. (more)

Bank of America (NYSE:BAC) – This is the second largest U.S.-based financial holding company with global assets of $2.13 trillion. Recent reviews by Wall Street analysts have resulted in an upgrade of Bank of America. Earnings for 2011 were just 1 cent, but estimates for 2012 are 72 cents, and $1.08 in 2013. And several analysts cite a stronger balance sheet as an evolving development.

While BAC is a higher-risk investment than many regional banks, it could bring investors a greater reward.

Technically BAC bottomed in December, and began a bull channel that has roughly held on its 50-day moving average now at $8.50. A golden cross (bullish long-term indicator) was flashed in March, and currently the stochastic is hooking up for a pending buy signal. The target for BAC is $14.

The "Chart of the Day" is Verisk Analytics (VRSK), which showed up on Wednesday's Barchart "All-Time High" list. Verisk on Wednesday posted a new all-time high of $47.96 and closed 3.39% higher. TrendSpotter has been Long since Jan 11 at $40.23. In recent news on the stock, Brigantine on March 23 initiated research coverage on Verisk with a Buy and a target of $51. UBS on March 7 initiated coverage with a Netural and a target of $44. Verisk on March 23 announced an agreement to acquire MediConnect Global for $349 million. Verisk Analytics, with a market cap of $7.7 billion, is a leading provider of risk assessment solutions to professionals in insurance, healthcare, mortgage lending, government, risk management, and human resources.