Markets are still bound by the larger range from March, but there was a consolidation breakout on offer from the S&P. It still has overhead supply to work with, but today's buying registered as accumulation. The S&P enjoyed a MACD and Stochastic 'buy' along with today's action. However, On-Balance-Volume still has to trigger a 'buy' signal to turn all technicals net bullish. 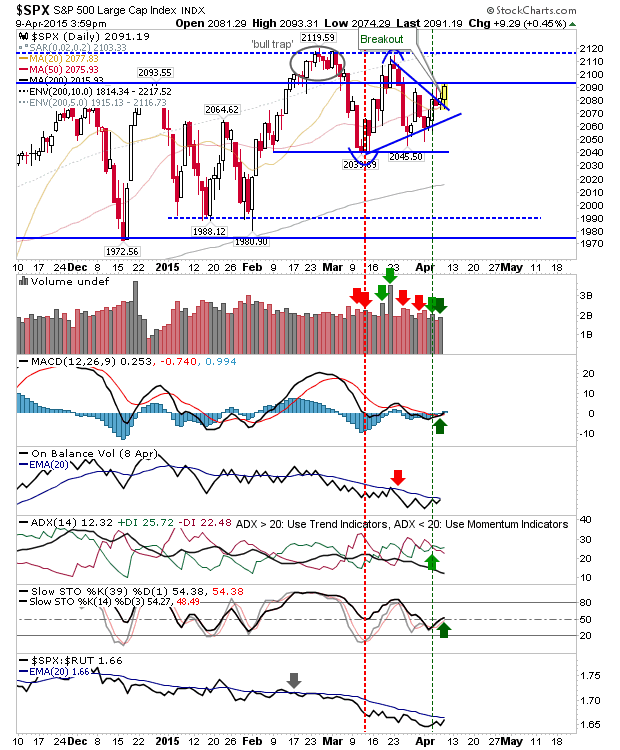 The Nasdaq took out the near term high which had looked a good area for shorts to work (but is now history). Next up is to challenge 5000, and then the 'bull trap'. (more)
Please share this article
at 12:03 AM No comments: Links to this post

MARKET OUTLOOK:
Oil and energy stocks have likely seen their worst days as most potential negative news is now out and fully digested by the market. The current global over-supply of oil is being rebalanced from stronger than expected demand growth in the U.S., flattening-to-then falling US production growth, and potentially weaker-than-expected production growth in non-North America non-OPEC countries (Weatherford suggesting 1.5 to 2 million Bbl/d drop in 2016 over 2015). The oil market could potentially be undersupplied in 2016 unless oil rallies to allow increases to global capex budgets from their depression-like levels. In short, the worst is likely over and now is the time to be adding exposure to the energy sector.
In non-resource small cap land valuation multiples, especially in the healthcare and technology sectors, continue to expand and in some instances appear fully valued relative to their earnings growth rates. As oil and by extension energy stocks increase in favour in the second half of 2015, money flow could leave these overvalued sectors resulting in pockets of unexpected weakness. Additionally, opportunities exist in some “quasi oil stocks” that were weak in late 2014 and early 2015 on concerns that weak consumer spending in Western AB would impact earnings. (more)Please share this article
at 12:03 AM No comments: Links to this post

$FB (Facebook Inc.: NASDAQ) recently roared above the $80 level to mark a new all time intraday trading high of $86.07. 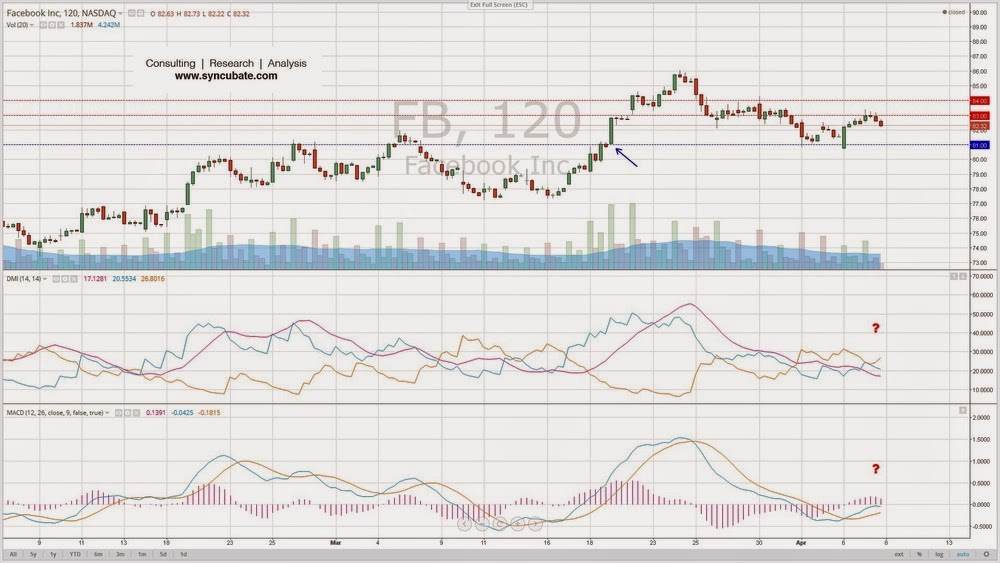 In looking at the two hour chart we can see that the bulls really picked up the pressure as soon as the stock broke above $81 in mid-March, as noted by the blue arrow. Historically, this had been a tough level for the bulls to maintain the price above.
The momentum push higher was confirmed on the hold and subsequent rise above $82. By late morning on 3/24/15, $FB traded just above $86. From this point forward, the decline in +DMI and crossover of the MACD line below the signal line indicated exhaustion on the part of the bulls.
We can see that $FB has since pulled back to digest the latest gains, closing at $82.32 on 4/7/15. The ADX line is not rising, so there is no trending move in play at this moment over the two hour time frame. However, it is clear that +DMI and -DMI are taking turns in overlapping, so the bulls and bears are in the midst of a tug of war to determine who will move the stock in a big way next.
The $83 and $84 levels seem to be resistance for the bulls to overcome in the near term, with support at the breakout level around $81. If the MACD line crosses above zero and can hold above the signal line, a bullish continuation move may be in play. This would be further reinforced by a rising ADX line and spike in +DMI.
Please share this article
at 12:03 AM No comments: Links to this post

A "monster breakout" could be starting at Shanghai Stock Exchange

CLICK ON CHART TO ENLARGE
This chart takes a look at the Shanghai Index over the past couple decades. As you can see, this index has remained inside of a well-defined rising channel.
From 2007 to 2014, this index had little to brag about, as it lost about two-thirds of its value in that time. The large decline took the index from the top of this channel (resistance) to bottom of this channel (support) in a five-year span. The index broke above a four-year falling channel on a breakout above Line 1.  (more)