Why Are States and Cities Going Out of Business

States and cities are in dire financial trouble. So how did they get to this point? WSJ’s David Wessel says thanks to a spend-now-ask-questions-later approach, they only have themselves to blame.

Seeking an Interest Rate Solution: Why the US Federal Reserve should raise short term rates

When the Fed lowered the interest rates for overnight borrowing to near zero, it was said to be a measure to stimulate the seized credit markets. Low interest rates stimulate borrowing. On the demand side that is true. On the supply side, it is clearly not the case.

The financial crisis woke America up from years of binge borrowing and now the credit hangover to deal with. So while low interest rates were appealing for those who wished to refinance their existing debt, there was no interest rate low enough that would tempt them to take on new debt to finance consumption. The deleveraging process limited the chance of success of an interest rate solution.

The country had almost overnight turned from a marginal borrower to a marginal saver.

One of the things that people forget is that low interest rates, while good for the borrower is not good for the saver. (more)

Euro’s death would be ‘cataclysmic’

French President Nicolas Sarkozy vowed Thursday that he and European partners will “never turn our backs on the euro,” calling it a linchpin of peace and prosperity despite the government debt crises worrying investors and leaders worldwide.

Hours before he spoke at the World Economic Forum in Davos, the Alpine winter calm was briefly disrupted by a small explosion at a hotel – unusual for this Swiss resort, blanketed in security during the annual forum. Windows were broken but there were no injuries, Swiss police said. Forum organizers said a firework was to blame.

Mr. Sarkozy also expressed concerns about currency imbalances and rising commodity prices, priorities as he presides over the Group of 20 leading world economies this year. But his most vigorous words concerned the euro, shared by 17 countries across the European Union.

“The disappearance of the euro would be so cataclysmic that we can't even possibly entertain the idea,” he said.

He acknowledged months of worries about the euro's survival since the European Union and International Monetary Fund had to bail out debt-laden Greece and then Ireland last year.

But despite those concerns, he said, “the euro is still there.”

“Europe has had 60 years of peace and therefore we will never let the euro go or be destroyed. ... I speak as much for my German friends as I do for the French,” he said. (more)

The agency lowered Japan's long-term sovereign debt rating one notch to AA-, which is the fourth highest level and the same rating given to China, Saudi Arabia and Kuwait. The news sent the dollar as high as ¥83.18 from ¥82.20.

The downgrade is a stern reminder to Japan that it faces consequences for letting its debt swell to twice the size of gross domestic product. Prime Minister Naoto Kan is pushing to reform the country's tax and social security systems, but the downgrade could complicate the fiscal picture by making it more expensive to finance the country's debt. Creditors typically demand higher interest rates when credit ratings fall.

Japan's debt ratio, already among the highest in the developed world, is on track to rise more than expected and won't peak until the mid-2020s, S&P said in a statement. The country's problems, it added, are exacerbated by persistent deflation and a rapidly aging population.

Japan is the world's fastest-aging country, with its population projected to shrink from 127 million people now to 90 million by 2055 — 40 percent of whom will be over 65. (more) 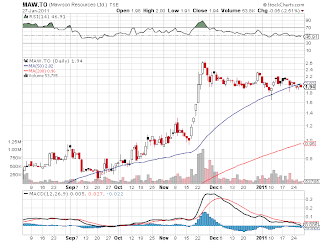 The Energy Report: Shares in Pinetree Capital have had a good run in the last six months, going from about $1 per share in July 2010 to about $3.38 now. What's largely responsible for that remarkable run?

Marshall Auerback: A number of things. I think Pinetree has been an undervalued stock for a long time based on its net asset value. But we had very adverse financial conditions in 2008, particularly adverse for small-cap companies, which comprise most of our portfolio. Even though we started to see an improvement in the credit markets in 2009, they really didn't start to loosen up until last year for the smaller companies. Your risk in holding these small caps is not so much market risk as liquidity risk. A number of these companies had cash on their balance sheets but they were clearly capital-constrained because they were dependent on ongoing capital injections to develop these assets.

In 2010, the capital markets began to re-engage and that made it easier for some of these companies to access funding. In turn, they were able to develop their assets, which helped improve their share prices. But it took a while. The markets were basically trendless until about September of last year, then all of a sudden you have this big move in the commodity space. Clearly, that's Pinetree's sweet spot. (more)
at 12:17 AM No comments: 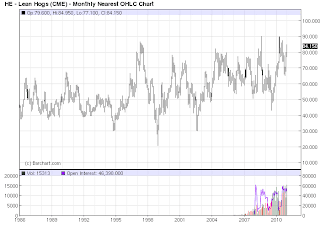 Hog futures fell from the highest price in at least 24 years on signs that the rally was overdone.

The price has jumped 31 percent in the past year, reaching 92.125 cents a pound today, the highest for a most-active contract since at least 1986. The market became “overbought,” said Tom Cawthorne, the director of hog marketing at R.J. O’Brien & Associates in Chicago.

“We just kind of ran out of buyers,” Cawthorne said. “We’ve had such a big run-up. We’ve seen a lot of spreaders liquidating out of their positions” on April contracts and summer prices, he said.

Hog futures for April settlement fell 0.1 cent, or 0.1 percent, to settle at 90.025 cents a pound at 1 p.m. on the Chicago Mercantile Exchange. Yesterday, the commodity gained 3 cents, the most allowed by the CME.

The worst outbreak of foot-and-mouth disease in Asia for at least 50 years may get more severe as Lunar New Year holidays starting Feb. 2 spark a surge in travel, threatening to spread the virus, said Juan Lubroth, the chief veterinary officer at the United Nations’ Food and Agricultural Organization in Rome. (more)

Desperation kitchen sink anyone? The M2, which up until now was merely diagonal, is about to go parabolic. In the week ending 1/17/2011, Seasonally Adjusted M2 surged by $46.6 billion, the biggest weekly increase in the broadest tracked monetary aggregate (ever since the cost-cutting associated with discontinuing the M3) since 2008. One look at the chart below indicates precisely what is fueling the endless market ramp. Furthermore, for those who realize there is a 93% correlation between M2 and gold, we would certainly recommend putting on the M2/Gold convergence trade on. 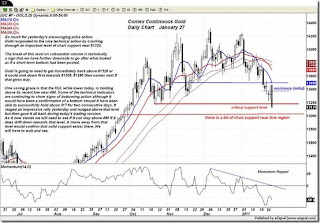 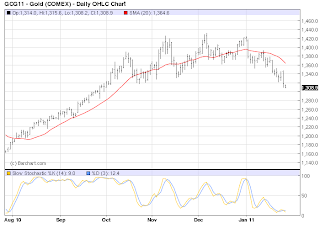 The gold market is seeing reduced safe-haven investment demand, what with the U.S. stock indexes trading near multi-year highs, no fresh headline news regarding European Union financial problems, and no major geopolitical flare-ups occurring. Indeed, investors worldwide have gained a better appetite for taking risk, which is hampering the safe-haven gold market. However, the gold market is still just one step away from a solid price rebound or an extended rally should a significant geopolitical or financial market event suddenly and unexpectedly appear in the news headlines.

The U.S. dollar index traded weaker again Thursday and hit another fresh 2.5-month low. The dollar index bears have downside near-term technical momentum and if the index remains on a downward path in the near term, look for gold prices to at least see limited selling interest. Gold bulls have been disappointed recently that the yellow metal has not seen more upside support from the weaker dollar index. (more)

China Will Face Crisis Within 5 Years, 45% of Investors in Global Poll Say

Global investors are bracing for the end of China’s relentless economic growth, with 45 percent saying they expect a financial crisis there within five years.

An additional 40 percent anticipate a Chinese crisis after 2016, according to a quarterly poll of 1,000 Bloomberg customers who are investors, traders or analysts. Only 7 percent are confident China will indefinitely escape turmoil.

“There is no doubt that China is in the midst of a speculative credit-driven bubble that cannot be sustained,” says Stanislav Panis, a currency strategist at TRIM Broker in Bratislava, Slovakia, and a participant in the Bloomberg Global Poll, which was conducted Jan. 21-24. Panis likens the expected fallout to the aftermath of the U.S. subprime-mortgage meltdown.

On Jan. 20, China’s National Bureau of Statistics reported that the economy grew 10.3 percent in 2010, the fastest pace in three years and up from 9.2 percent a year earlier. Gross domestic product rose to 39.8 trillion yuan ($6 trillion). (more)

Four Reasons Why The Government Is Destroying The Dollar 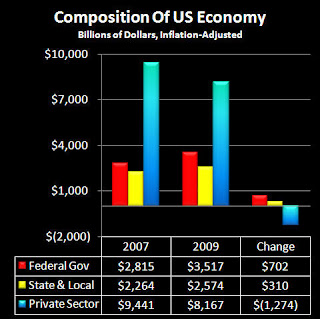 The United States government has four interrelated motivations for destroying the value of the dollar:

1. Creating money out of thin air on a massive basis is all that stands between the current state of hidden depression, and overt depression with unemployment levels in excess of those seen in the US Great Depression of the 1930s.

2. It is the weapon of choice being used to wage currency war and reboot US economic growth.

3. It is the most effective way to meet not just current crushing debt levels, but to deal with the rapidly approaching massive generational crisis of paying for Boomer retirement promises.

In this article we will take a holistic approach to how individual short term, medium and long term pressures all come together to leave the government with effectively no choice but to create a high rate of inflation. If you have savings, if you rely on a pension, if you are a retiree or Boomer with retirement accounts - any one of these four fundamental motivations is individually a grave peril to your future standard of living. However, it is only when we put all four together and see how the motivations reinforce each other, that we can understand what the government has been and will be doing, and then begin the search for personal solutions. (more)