If I Could Only Buy One Buffett Pick, This Would Be It: VRSK 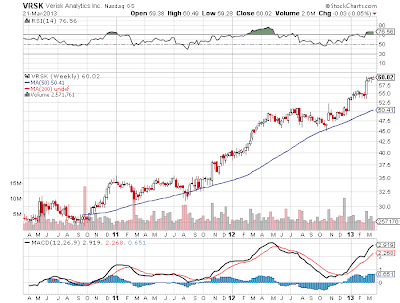 In his career, Buffett has done well in both bull and bear markets by picking great stocks. Individual investors can turn to the annual report of Berkshire Hathaway (NYSE: BRK-A) to see exactly what Buffett is doing. Those reports include folksy wisdom from Buffett and a list of the stocks he owns. Buying and selling after Buffett initially reveals his positions would have beaten the S&P 500, according to a study done by two finance professors.

One problem with this approach is that Buffett owns a large number of stocks. In his most recent report, he noted large positions in 41 different companies and it would require a large amount of capital to own that many stocks. Another problem is that Buffett sometimes gets deals that are not available to individual traders. For example, when Buffett bought shares in Goldman Sachs (NYSE: GS) during the financial crisis, he received preferred shares with a 10% dividend yield that were not publicly traded.

There is also the question of whether the Oracle of Omaha is losing his touch after an incredible career of more than 60 years. Berkshire has underperformed the S&P 500 in three of the last four years.  (more)

Markets Expect Swift Action From Bank Of Japan
We may expect a shift toward more aggressive monetary policy from the Bank of Japan soon. Haruhiko Kuroda, the new governor of BOJ, said last week that he wants to discuss easing soon, and he mentioned in the past that he will do whatever it takes to achieve a 2% inflation goal.
Yesterday he confirmed his views during the first press conference after taking the helm of the Bank of Japan this week. He said: “We will do whatever we can to achieve the 2 percent price target at the earliest time possible”.
Even though the government doesn’t hide its plans to devalue the yen, the Bank of Japan is facing very high expectations. The Yen significantly fell during the last few months, with USD/JPY making new highs, but this run has been on the back of the talk not supported by any significant action.
The Next BOJ Policy Meeting Will Take Place On April 3rd.
On Monday BOJ announced that Masayoshi Amamiya will return to his original duty of supporting the governor on monetary policy decisions. Amamiya led the BOJ’s efforts last year to achieve a 1% inflation goal.
Both Kuroda and Amamiya believe that monetary policy alone can end the deflation that has affected the Japanese economy for the last 15 years. The appointment of Amamiya is a sign of confirmation that BOJ might be gearing up for a fresh round of easing, that can be announced during the meeting at the beginning of April. The vast majority of market participants expect BOJ to unleash asset purchases of at least 10 billion yen. Any increase in asset purchases will extend USD/JPY rally.
USD/JPY Is Trading Within A Range.

USD/JPY – 4 hour chart
We mentioned in our daily report that USD/JPY is trading within  94.439 – 96.275 range.
The pair tested the lower band of our range short time ago, before bouncing slightly. Yesterday’s high was 96.10 – the action is clearly range-bound. Our bias is still Bullish-Neutral. From the technical perspective the pair might be putting a temporary top here, but it’s too soon to tell, and highly unlikely due to strong desire of BOJ to debase its currency. We need to watch the range closely.
One of the factors that can contribute to temporary USD/JPY weakness is the end of Japanese financial year on March 31st. Traditionally Japanese companies tend to bring their profits in US dollars back into the country. This seasonal factor could lead to additional pressure on USD/JPY leading to the end of the month.
We believe that the areas around 93.67 will represent a very good buying opportunity. The repatriation of funds will be completed by March 31st, and we will expect a second wave of USD/JPY buying after that.
Please bookmark us
at 12:05 AM No comments: Links to this post

kingworldnews.com / March 21, 2013
Today legendary trader Jim Sinclair told King World News that Lagarde’s IMF Cyprus disaster, in stunning fashion, has now forced Chairman Ben Bernanke out of the Fed.  Sinclair, who was once called on by former Fed Chairman Paul Volcker to assist during a Wall Street crisis, takes readers on a trip down the rabbit hole that has become know as “The Cyprus Catastrophe” in this extraordinary and exclusive interview:

Eric King:  “Remarkably, just a day and a half ago you stated on King World News that ‘Putin has faced down the International Monetary Fund, which by the way is located in Washington, DC, and is in fact Washington itself.  So in the sense of a Cold War, you have Washington vs Moscow, and Moscow won this round.  The bottom line here is Lagarde took on Putin, but Putin has checkmated both her and the IMF the same way a Russian grandmaster chess player would destroy his opponent.’  Within hours of KWN reporting that news, Lagarde’s apartment was raided by police and she is now scrambling.”

Sinclair:  “The important point is, how long has this case been going on in which there was a police raid on the Lagarde’s apartment?  This is a 20-year old case, making it look a little less like just a coincidence.  I would also add to that I don’t think it’s any coincidence that the Chairman of the Federal Reserve has now indicated the possibility that he will not be reappointed, and that he will not accept the reappointment….
READ MORE
Please bookmark us
at 12:04 AM No comments: Links to this post

The Chart of the Day is Southwest Airline (LUV).  The Trend Spotter signaled a buy on 11/8 and the stock is up 38% since then.  The 96% Barchart technical buy signal was earned by advancing 16 times and gaining 8.03% in the last month.

The most successful investors have had a mentor for guidance during their formative years.
Even Warren Buffett, one of the world's greatest investors, gives credit to his instructor for his success. While it is possible to learn through experience in the stock market, having a mentor greatly shortens the learning curve.
The market is a treacherous place and learning by trial and error can be costly and destructive to your portfolio. Fortunately, investors don't need to have a personal relationship with an investing mentor to succeed in the stock market. In fact, the same educational information available to Buffett is available to regular investors like you and me.

Buffett credits economist, professor and investor Benjamin Graham as being his mentor during his learning years.

Graham had such a profound effect on the young Buffett, that he named his son Howard Graham Buffett in honor of his teacher. Only Buffett's own father had more of an influence on him than Graham.

Graham is most known as being the originator of value investing. Along with teaching the technique as a professor at Columbia Business School, Graham wrote the book "Security Analysis" to pass along his strategies to all investors. This book, along with the subsequent "The Intelligent Investor," are among the most respected writings in all of finance. (more)