Cepheid, a molecular diagnostics company, develops, manufactures, and markets integrated systems for testing in the clinical market and non-clinical markets. Its systems enable molecular testing for organisms and genetic-based diseases by automating manual laboratory procedures. The company primarily offers GeneXpert system that integrates sample preparation in addition to DNA amplification and detection. The GeneXpert system is designed for reference laboratories, hospital central laboratories, and satellite testing locations, such as emergency departments and intensive care units within hospitals, as well as physician offices and other alternate site laboratories.
Take a look at the 1-year chart of Cepheid (NASDAQ: CPHD) below with added notations: 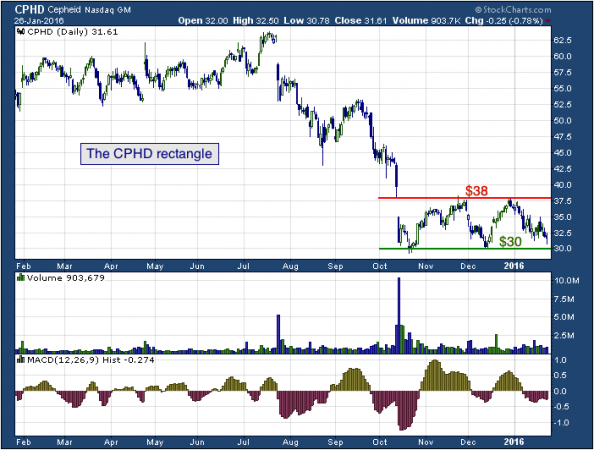 CPHD had been trading sideways for the first part of 2015, and then the summer drop came. After the decline, the stock started trading sideways over the most recent three months. While in that sideways move, the stock has formed a common pattern known as a rectangle. A minimum of (2) successful tests of the support and (2) successful tests of the resistance will give you the pattern.
The CPHD rectangle pattern has formed a resistance at $38 (red), and a $30 support (green). At some point the stock will have to break one of the two levels.

The Tale of the Tape: CPHD is trading within a rectangle pattern. The possible long positions on the stock would be either on a pullback to $30 or on a breakout above $38. The ideal short opportunity would be on a break below $30.
at 12:03 AM No comments: Links to this post

Martin Armstrong was back with us today. He says that the politicians are the problem. They will never admit a mistake. Why are they defending the Euro. That’s why we’re having so many outsider politicians getting elected around the globe. And it also explains the rise of Trump. The establishment is fighting this trend but they can’t do anything about it. As Einstein said, “You can’t solve a problem by using the same thinking that brought it on.” Martin says that the computer model is still foreseeing a large rise in the stock market as funds flow in from the distressed public debt. And now if you owe $50,000 or more in taxes, the IRS can revoke your passport. 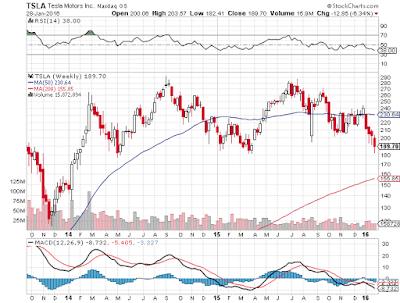 Other stocks that that saw plenty of short-selling activity included the following:
Below is a look at Karl Loomes’ list of top stocks in the Americas from a security lending perspective.

This week’s top pick for North America was an energy company. Depressed oil prices are having large effects on many firms, both within the sector and outside of it.
While a small recuperation in oil prices over the past week has provided the energy sector with some breathing air, for Southwestern, all that this brought was a small reduction in its losses (the stock had lost almost 80 percent in 12 months; now, the losses have been cut to about 66 percent).  (more)