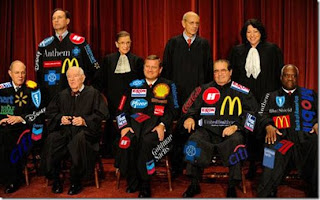 The government also re-imposed a sales tax on homes sold within five years of their purchase. (more)
at 3:50 AM No comments: Links to this post 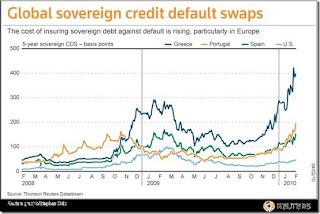 Rolfe Winkler argues that – in the short-run – the PIIGS countries (Portugal, Ireland, Italy, Greece and Spain) will slash their budgets and get bailed out by the EU.

Simon Johnson thinks that the weakening Euro caused by the PIIGS’ woes will hurt American exports (weaker Euro equals stronger dollar), and could lead to problems for leading global banks.

Other commentators fear that the PIIGS’ crisis has as much potential as a financial "contagion" as the subprime meltdown and the failure of Lehman. (more)

Two Hedge Funds One Bank? Is There A Concerted Effort To "Destroy" Greece?

In the pre-math of the Greek collapse, conspiracy theories are swirling about who keeps blowing Greek CDS spreads wider. The answer, so far completely unconfirmed, is that a large US investment bank (we "wonder" just which US investment bank dominates the sovereign CDS market), and two major hedge funds are behind the CDS "attacks" on Greece, Portugal and Spain. According to Jean Quatremer, and his Coulisses de Bruxelles, UE blog, the plan involves blowing spreads to record levels, and is prompted by the hedge funds' anger at not having been allocated substantial amount of the recent €8 billion GGB issue, in order to lock in profits from their CDS long exposure. Being thus unhedged with a short bias, their alternative is to continue buying protection else risking to mark losses on their extensive CDS short risk exposure. (more)
at 3:31 AM No comments: Links to this post

“At first glance, the effects of inflation on a company’s ability to create value might seem negligible,” the report notes.

“Yet a closer analysis reveals that to fend off inflation’s value-destroying effects, earnings must grow much faster than inflation — a target that companies typically don’t hit, as history shows.”

McKinsey researchers note that, during the mid-1970s to the 1980s, U.S. companies managed to increase their earnings by around 10 percent. (more)
at 3:28 AM No comments: Links to this post 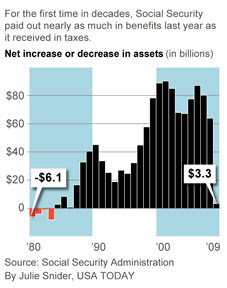 Social Security's annual surplus nearly evaporated in 2009 for the first time in 25 years as the recession led hundreds of thousands of workers to retire or claim disability.

The impact of the recession is likely to hit the giant retirement system even harder this year and next. The Congressional Budget Office had projected it would operate in the red in 2010 and 2011, but a deeper economic slump could make those losses larger than anticipated.

"Things are a little bit worse than had been expected," says Stephen Goss, chief actuary for the Social Security Administration. "Clearly, we're going to be negative for a year or two."

Since 1984, Social Security has raked in more in payroll taxes than it has paid in benefits, accumulating a $2.5 trillion trust fund. But because the government uses the trust fund to pay for other programs, tax increases, spending cuts or new borrowing will be required to make up the difference between taxes collected and benefits owed. (more)

Treasury Secretary Timothy F. Geithner said the U.S. is in no danger of losing its Aaa debt rating even though the Obama administration has predicted a $1.6 trillion budget deficit in 2010.

“Absolutely not,” Geithner said, when asked in an ABC News interview broadcast yesterday whether a downgrade is a concern. “That will never happen to this country.”

Geithner said investors around the world turn to U.S. Treasury securities and dollar-denominated assets whenever they are worried about global stability. That reflects “basic confidence” in the U.S. and its ability to bounce back from the global recession, he said. (more)

The Dow Jones industrial average, a closely watched barometer of the economy’s health, dipped below the 10,000 threshold on Monday, delivering a psychological setback as investors braced for more market volatility.

When the final bell sounded, the Dow had fallen to 9,908.39 — its lowest level in three months — as lingering fears over a debt crisis in Europe undermined confidence in American financial institutions.

Analysts played down the significance of the Dow’s tumble below the five-digit mark. But they did not deny the broader message it underscored: that the energy of last year’s rally seems to have fizzled as the market comes to terms with the reality of an uneven recovery. (more)