Martin Armstrong – Stop The World, We Want To Get Off… Gold And Silver To Hit Lows In June

Martin Armstrong spoke with us today. The situation is Europe is getting more hopeless by the day. The markets are as always in control, but the brain-dead politicians don’t get it and they will eventually be swept away. France has outlawed gold purchases for cash. Every ounce must be reported to the authorities. The government wants to seize all private property, which is not going to end well. Major civil unrest is coming to Europe. Youth unemployment is approaching 60 percent. Their future is gone. People have zero confidence in the government’s ability to solve any problem. In some countries, two-thirds of the youth want to migrate to the US. Go figure. And it looks like the low for gold and silver should be made in June.

Gold Stocks: Its Time To Be BRAVE!

I used to half joke with some of my investing friends that the best time to buy stocks is during or right after a crash.  Think 1987, 2000-2002, 2008-09, and now perhaps Gold Miners?? Well, before we get too far ahead of ourselves, lets examine evidence of a "Crash": I like to use crowd behavioral, empirical, and technical evidence in combination.

1.  In a recent money managers poll, virtually nobody was bullish on Gold or Gold stocks, and over 80% of those polled were bullish on the SP 500 and US stocks.

2.  The percentage of Dumb Money traders (non-reportable traders) in the futures markets with short positions on Gold is at all time highs, they tend to be very long at the highs and very short at the lows.

3.  The insider buying ratio of Gold Mining stocks to sellers is running over 10 to 1, the highest since October 2008 when Gold bottomed out at $685 per ounce from $1030 highs.  Quoting Ted Dixon, CEO of Ink Research, "such a high level of buying interest among officers and directors within their own businesses in the resource sector has correctly foreshadowed a recovery in share prices in the past: That high point of nearly five years ago came about six weeks before the Venture market bottomed on Dec. 5, 2008...While the excitement that surrounded mining stocks as recently as two years ago has waned, experienced value investors recognize that such periods of investor neglect often give rise to the best deals" Source: Theglobeandmail.com

4.  The ratio of the HUI Gold Bugs Index to the SP 500 is at multi year lows and in near crash mode on the charts. The RSI Index (Relative strength) on the weekly charts is at 10 year lows at -13.71, which is off the charts low!!

5.  Most trading message boards I view at Stocktwits and others are universally bearish on Gold and Gold stocks.

6.  Gold is in a wave B or Wave 5 down re-testing the 1322 lows which we have discussed here for weeks as very likely if 1470 was not taken out on the upside... this is a normal sentiment pattern and re-test.

8. Currency debasement continues around the world with negative real interest rates. This is bullish for Gold once this correction has run its course.

9. Hulbert Digest Gold Sentiment index is at an all time low (gold newsletters at -35 sentiment readings!!)

10.  Gold -Silver put to call ratios are at all time highs


I could go on and on with headlines and such, but you get the idea.  This is the same type of sentiment I wrote about on the stock market on Feb 25th 2009, here is that article... and nobody on the planet was bullish.
Below is a chart showing the Bullish % index for Gold Miners, as you can see the last time we were at 0% was late 2008 when Gold had bottomed out and insiders were also buying like crazy like now:

Obviously Gold could end up going a lot lower than we think, and the Gold Mining stocks could sink further yet. But for those with a 3-6 month horizon, we expect the 21-24 month Gold correction to complete by no later than October 2013.  During the next several months the opportunities to buy some miners on the cheap will potentially make some investors a lot of money in the coming few years.
Please share this article
at 12:05 AM No comments: Links to this post

The Active Network, Inc. provides organization-based cloud computing application services to business customers in North America, Europe, and internationally. The company offers ActiveWorks, an organization-based cloud computing platform, which transforms the way organizers record, track, manage, and share information regarding activities and events. Its ActiveWorks back-office system pulls customers participant management, operational reporting, volunteer management, and service and payment processing functions into one hosted system. The company also provides consulting services, which consist primarily of business mapping, project management services, and guidance on best practices in using its services; and implementation services, including system set-up and configuration, and data conversion, as well as develops customized training and education programs relating to both the use and administration of its services. It serves a range of customers, including community and sports organizations, large corporations, small and medium-sized businesses, educational institutions, federal and state government agencies, non-profit organizations, and other related entities.
Please take a look at the 1-year chart of ACTV (The Active Network, Inc.) below with my added notations: 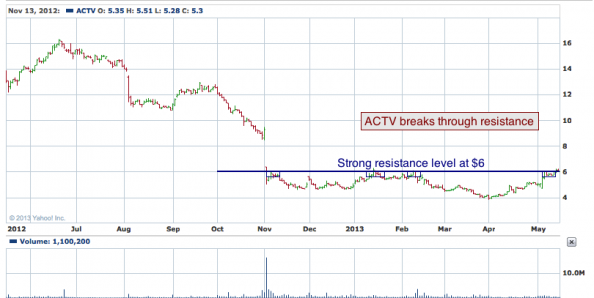 Back in June ACTV peaked at $16 and sold off heavily after that. While forming a base over the last (6) months, the stock has been hitting a very important level of resistance at $6 (navy). No matter what the market has or has not done since November, ACTV had not been able to break through that area of resistance. Well, earlier this week the stock finally broke above $6.
The Tale of the Tape: ACTV had a key level of resistance at $6 that should now act as support on any pullbacks. A long trade could be entered on a pullback to $6 with a stop placed below that level. However, if the stock were to break back below $6, a short trade could be made instead.
Please share this article
at 12:04 AM No comments: Links to this post

Death of the Commodity ‘Supercycle’ is This Year: Citigroup

Well, that headline got your attention. As Citigroup’s Edward L. Morse, Heath R. Jansen and three colleagues must have intended.
The firm’s note “The End of the Commodities Supercycle” this week predicts that the boom time is over this year for metals, oil and other key commodities. Citi predicts a return to normalcy starting this year — meaning commodity prices reflect the ups and downs of specific markets. That’s opposed to the persistent gains that China’s growth — now slowing — created in commodities:


The downward shift in China’s economic growth rate combined with the decline in the commodity intensity of growth have a permanent and profound impact on global markets. China has reached a new phase, less focused on infrastructure and urbanization, both of which are highly commodity intensive. Lower single-digit economic growth shifting to a greater emphasis on consumption rather than investment hits industrial metals, bulk commodities and to a lesser degree energy demand.

What happens from here, per the Citi analysts, should very much reflect supply and demand factors in individual commodities:


The first quarter provided a clear precursor of what’s likely to come – the majority of commodities saw prices fall across the board, and those that rose did so for commodity-specific reasons: US natural gas brought the highest returns of any commodity for the first time in a half decade on the temporary stall in production growth and a measurably colder winter, ending 1Q with a solid month of unusual residential/commercial and power demand; cotton prices rose sharply as well, partly in response to the 18% drop in 2012 but largely on the basis of uncertainty about Chinese buying ahead of reduced plantings; US gasoline rose to record winter levels largely as the residual impacts of 2012’s shuttering of Atlantic Basin refining, a significant collapse in Venezuela’s refining system (which turned the country from being a structurally long exporter to a structurally short importer of the key transportation fuels), and of course because of the devastation of Hurricane Sandy on the US East Coast; and US-based WTI was finally a winner due to de-bottlenecking of logistic systems in the US while waterborne crude stream markets remained firm.

PowerShares DB Commodity Index Fund (DBC) is down about 5% this year. Several individual commodities are already technically in a bear market or have spent recent stretches in one. SPDR Gold Trust (GLD) is down more than 17% on the year and iShares Silver Trust (SLV) is down by nearly 26%. Oil prices are up more than 5% on the year, helping United States Oil Fund (USO) fight the futures curve with a rise of more than 2% YTD.
Please share this article
at 12:03 AM No comments: Links to this post

Arch Crawford – May 20 Was A Big Deal, and More Volatility Ahead 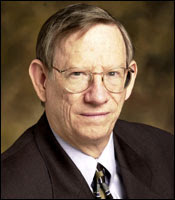 During Arch Crawford‘s interview last month, he stated that May 20th would be a significant day. Yesterday’s precious metals markets were quite frenetic-starting with a beat down of gold and silver and ending with a substantial upside reversal. And of course the Oklahoma tragedy occurred. It seems to be a pretty prescient call. Looks like there’s more volatility and financial uncertainty ahead. Judging from today’s action in the gold pits, that’s pretty well assured.