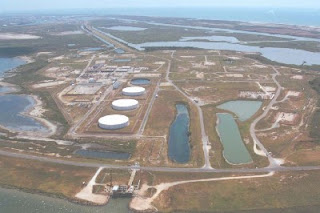 As the U.S. strategic petroleum reserve (SPR) approaches capacity (721.5 million barrels filled out of a total possible 727 million, and will be filled by January 2010), the federal government will fade out of the oil-buying business. Some bearish traders believe that this factor can weigh in on prices, since most petroleum stocks in the United States are government-held rather than private. Bullish traders have also used the filling of the Chinese SPR as a reason that oil should go much higher.

The team at Casey's Energy Opportunities believe that planned government buying or selling of crude oil for SPRs actually have very little impact in the overall market. However, an overall drawdown of worldwide inventory could put downward pressure on the price of oil. The various countries also have their particular reasons and influences in decisions to tap their reserves. (more)

Morgan Stanley’s Jason Todd, who had been Wall Street’s most bearish equity strategist, boosted his 2009 forecast for the Standard & Poor’s 500 Index by 17 percent because of higher-than-anticipated earnings.

The strategist recommended investors cut stock holdings in July following a 41 percent surge in the S&P 500 since March 9. Todd now expects the index to finish the year at 1,050 after it rose 10 percent to 1,050.78 since his comments two months ago. He also upgraded his 2010 profit forecast for S&P 500 companies by 13 percent to $70 a share.

“The current rally is typical of what follows major bear markets and is not, in our view, the start of a new multi-year bull market,” Todd wrote in a note to investors dated today. “However, we now think it can run for longer than we previously expected.” (more)
at 5:50 AM No comments: Links to this post

US May Face 'Armageddon' If China, Japan Don't Buy Debt

The US is too dependent on Japan and China buying up the country's debt and could face severe economic problems if that stops, Tiger Management founder and chairman Julian Robertson told CNBC.
"It's almost Armageddon if the Japanese and Chinese don't buy our debt,” Robertson said in an interview. "I don't know where we could get the money. I think we've let ourselves get in a terrible situation and I think we ought to try and get out of it."

Robertson said inflation is a big risk if foreign countries were to stop buying bonds.

“If the Chinese and Japanese stop buying our bonds, we could easily see [inflation] go to 15 to 20 percent,” he said. “It's not a question of the economy. It's a question of who will lend us the money if they don't. Imagine us getting ourselves in a situation where we're totally dependent on those two countries. It's crazy.” (more)
at 5:40 AM No comments: Links to this post

Why the U.S. economy CAN'T “recover”

The U.S. propaganda-machine now reports on a daily basis that a “U.S. economic recovery” is underway – despite not one piece of evidence to support this “bold assertion” (shameless lie?).

Let's start with a definition of “recovery” suitable to the current, economic context: economic “recovery” means the economy is returning to (or “recovering”) a previous level of economic activity. In other words, with an economy which has shrunk by more than 10%, a “recovery” could only be occurring if the economy is already growing.

There is still absolutely no evidence that the U.S. economy is growing. Granted, the propagandists already know that the Treasury Department will report “economic growth” this quarter – regardless of what is actually happening in the real world. However, contrast this with the extremely cautious attitude of the same “experts” and “economists” when the U.S. economy started its collapse. Despite enormous volumes of evidence showing that the U.S. economy had started a serious collapse, these shameless shills refused to declare a “recession” had started for many months after that fact was obvious to the entire world. (more)
at 5:36 AM No comments: Links to this post

The head of oil giant Total has told the BBC the world could face a shortage of oil because of underinvestment.

Chief executive Christophe de Margerie warned that too little has been spent trying to tap into new oil reserves because of the economic crisis.

"If we don't move [now] there will be a problem," Mr de Margerie said. "In two or three years it will be too late."

He also said he thought oil prices would rise to more than $100 a barrel, from their current level of around $70. (more)

“I think that he (Ben Bernanke) will print (money) like never before in history.”

As a result, the Standard & Poor’s 500 Index can rise as high as 1,250 in a year, up 17 percent from midday Wednesday, Faber told Bloomberg.

“Where there is inflation in the system as defined by money supply growth and credit growth, you have currency weakness. Stocks can easily go higher. If you print the money, they can go anywhere.” (more)