zerohedge.com / by Tyler Durden / 01/24/2014 10:42 -0500
Yesterday’s BofA’s MacNeill Curry warned that once above $1270, gold becomes “explosive” as the squeeze trap slams shut, which explains why the shorts are desperately defending the critical resistance redline. Today, the chief technician of Bank of Countrywide Lynch looks at the two other key correlation pairs: the S&P500 (via the Emini ESH4) and the USDJPY, which by virtue of being the key funding pair determines the price of risk in virtually every corner of the globe. He is not too happy with what he sees.
Here are his thoughts:
On the S&P500: ESH4: From Bullish To Neutral
Anxiety across markets has reached a n/term extreme. The trends of the past few days/weeks are set to correct, but not turn…  The break of 1809.50 has invalidated our bullish view, but we ARE NOT BEARISH, JUST NEUTRAL. Going forward, we expect an 1805.75/1846.50 range trade before an eventual resumption of the larger bull trend. Below 1805.75 spells trouble, but bears only gain control on a close below 1767.75. See the chart for equivalent cash levels.
READ MORE
Please share this article
at 12:06 AM No comments: Links to this post

Will These 3 Laggard Stocks Outperform In 2014?

The best performing stocks in the S&P 500 in the past year have been Netflix, Micron Technology, Best Buy, Delta Airlines and Constellation Brands.
The interesting thing about these stocks is that as investors came into the year, they were not on anyone’s list of top performers or even likely winners. Most of them were on the worst performing list for 2012 and with the exception of Netflix, there was very little market buzz or chatter about any of these stocks.
The rest of the top ten performers include names like Pitney Bowes and Boston Scientific, whose very existence was being questioned by many as 2013 began.
It would just seem to make sense to take a look at those stocks in the index that have lagged the recent rallies and may be poised for a strong recovery over the next 12 months. When looking at the index stocks, it becomes clear that if you dig stuff out of the ground, your stock has not done very well in the past year. Miners of all types of metal and coal have done very poorly as have many energy companies that drill for oil and gas.
The worst performing stock over the past 52 weeks has been Newmont Mining (NYSE: NEM).
The company is one of the world’s largest producers of gold and also has copper mining operations around the world. The company has operations in the United States, Australia, Peru, Indonesia, Ghana, Bolivia, New Zealand and Mexico as well as development projects in West Africa. The stock has fallen by 46 percent in the past year as gold has lost some of its luster with investors.

The stock is now trading right at tangible book value, something that has not happened in the last decade or so. At this level, the shares have become fairly cheap and any positive developments in gold markets could send the share shooting higher over the next year.
Cliffs Natural Resources (NYSE: CLF) is the second worst performer of the year with the stock down 38 percent.
The stock is certainly cheap, trading at just 60 percent of its tangible book value. The concern here is that the global iron ore market is suffering from oversupply and it is simply going to take some time for the weak global recovery to work off the excess. If the market for iron ore and metallurgical coal should firm quicker than analysts expect, then this stock could be a top performer in 2104.

Long term investors should note that the recovery prospects for this stock over the next five years are extraordinary. Excess supply in the market is going to eventually lead to a decline in capacity, as smaller and marginal mining facilities are unable to stay in business.
Peabody Energy (NYSE: BTU) is the world’s largest publicly traded coal company and has been hurt by the secular decline in US coal usage.
What investors may be overlooking is that coal demand globally is increasing and the company is well positioned to serve the export markets. The Australian operations in particular are in a good position to serve what will be fast growing demand from Asian and emerging market economies that do not have the hostile political and regulatory issues that coal face in the United States.

The company trades at 1.1x book value and with the exception of a decline below book value for a brief period last year, this is the lowest multiple of asset value the shares have reached in the last decade. Earnings could rebound sharply next year and turn this losing laggard stock into a market leader. As with Cliffs, the long term recovery possibilities in Peabody Energy shares are exceptional.
It was the poet Horace who observed, “Many shall be restored that now are fallen and many shall fall that now are in honor.” Nowhere is this more true than in the stock market, which why Ben Graham had it as the prescript for Security Analysis.
The list of top performers may be more exciting, but the list of worst performing stock may be a more profitable hunting ground for investors.
Please share this article
at 12:05 AM No comments: Links to this post

One of the Biggest Bull Markets You May Ever See

Last month, we showed you the big boom in biotech...
Remember, biotech is one of the greatest "boom and bust" sectors known to man.
Since 1983, the sector has seen four triple-digit runs... and one quadruple-digit run of 1,347% in the early 1990s. The busts were equally spectacular, taking the entire sector down by as much as 70%.
After the most recent bust in 2009, the Nasdaq Biotech Index started a huge rally... The index is up 250% in five years. And it was the top-performing sector in 2013. 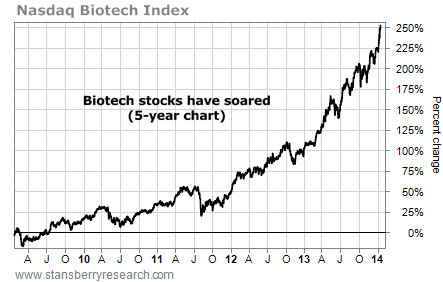 Despite the big run higher, we argued that there would be more gains ahead...(more)

Today London metals trader Andrew Maguire told King World News that the physical gold buying which took place in London on Thursday can only be described as “stunning.” He also said this terrified the shorts and created the panic spike in gold that shocked many market participants that day. Maguire also described what is happening the scenes in the war on gold, and with gold demand in his remarkable interview below.
Maguire: “Just like last week, this week was all about the funds trying to protect large naked short positions. They were trying to paint the gold price under the 50-day and the 10-day moving averages. This is a perfect example of how this paper-centric hot money is totally out of touch with the global bullion markets….
Continue Reading at KingWorldNews.com…
Please share this article
at 12:03 AM No comments: Links to this post

Curious why over the past few months JPM has quietly been accumulating a substantial amount of eligible physical gold (even as its registered gold inventory is the lowest it has ever been at just 87K ounces since December 13, 2013 when 147K ounces of gold was withdrawn - keep that date in mind for a few minutes)? This may have something to do with it: moments ago the daily Comex gold vault report confirmed what many expected, namely that the JPM accumulation was merely in advance anticipation of major withdrawals. How major? Well, on January 23, JPM saw 321,500 ounces of gold depart in one day. This was tied for the single biggest daily withdrawal in history!The last time JPM had an identically sized withdrawal? December 13.... 2012.

Something tells us the next few days will see matching withdrwawals from JPM's gold vault, which at last check was officially owned by the Chinese.
And for those wondering how JPM's total gold holdings look over time here it is: