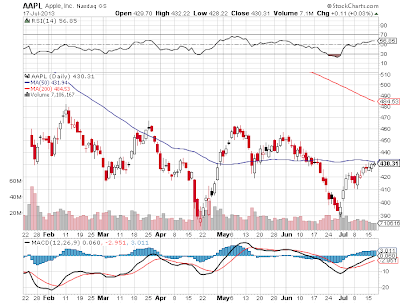 With Apple Inc. (Nasdaq: AAPL) bears feeling vindicated by the company’s fall from grace and shares hovering in the $400 range, it might sound like a stretch to say Apple stock is a buy.
But given all that’s happened, AAPL at $400 is a better deal than it may appear.
“It’s obviously been hit, but it’s bounced. It’s held up,” said Money Morning Capital Wave Strategist Shah Gilani. Pointing to the recent volatility in the markets, Gilani said, “The markets have been hit really hard and Apple has held up beautifully.”
Now it’s not likely that Apple stock will take off again like it did a few years ago and shoot up 100%.
(more)
Please share this article
at 12:07 AM No comments: Links to this post

Waste Management (NYSE: WM) Stock is About to Go on Sale 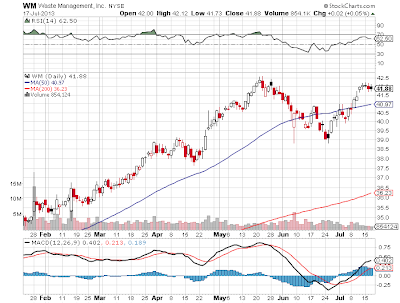 Nothing is more unappealing than having to discuss the finer points of garbage. While on the contrary, nothing is more exciting than discussing America’s transition to a “greener” society.
This is where Waste Management (NYSE: WM) finds itself — caught in the middle of these two discussions.
With a market cap of nearly $19 billion Waste Management is the largest trash collector and processor of waste in the U.S.
The company owns 264 active solid-waste landfills and services over 21 million customers. (more)

This Highflier Could Soon Come Crashing Back to Earth

This weekend marks the two-year anniversary of the IPO for real estate listing firm Zillow (NASDAQ: Z), which came public on July 19, 2011, at a price of $20 a share. The IPO finished its first trading day near $36 a share, and after some intermittent stumbles, has soared to a recent high above $68. That's a 240% gain in just two years for those lucky enough to buy into this IPO.
Yet, if you own the stock now, it may be time to head for the exits. That's because the current valuation is starting to bear almost no relation to the intrinsic value of this business.

In hindsight, investing in Zillow's IPO should be seen as a no-brainer. The company wisely took advantage of homeowners' desire to have much more information when deciding to buy or rent a home. Real estate brokers were always stingy with such information, a strategy they now should regret as companies like Zillow "democratize" the flow of information.  (more)
Please share this article
at 12:05 AM No comments: Links to this post

Amgen Inc., a biotechnology medicines company, discovers, develops, manufactures, and markets human therapeutics based on advances in cellular and molecular biology for grievous illnesses primarily in the United States, Europe, and Canada. Its principal products include Neulasta and NEUPOGEN to stimulate the production of neutrophils, which is type of white blood cell that helps the body fight infections; Enbrel, an inhibitor of tumor necrosis factor that plays a role in the body's response to inflammatory diseases; and Aranesp and EPOGEN erythropoiesis-stimulating agents, which stimulate the production of red blood cells. The company also markets other products comprising Sensipar/Mimpara, a small molecule calcimimetic that lowers serum calcium levels; Vectibix, a monoclonal antibody that binds specifically to the epidermal growth factor receptor; and Nplate, a thrombopoietin (TPO) receptor agonist that mimics endogenous TPO, the primary driver of platelet production, as well as offers Prolia and XGEVA denosumab, which are human monoclonal antibodies that specifically targets RANKL, an essential regulator of osteoclasts.
To review Amgen's stock, please take a look at the 9-month chart of AMGN (Amgen, Inc.) below with my added notations:

After breaking through the $90 resistance (teal) in February, AMGN peaked at $115 in April. Over the last month the stock has been stuck within a common pattern known as a rectangle. Rectangle patterns form when a stock gets stuck bouncing between a horizontal support and resistance. A minimum of (2) successful tests of the support and (2) successful tests of the resistance will give you the pattern. AMGN's rectangle pattern has formed a $102 resistance (red) and a $95 support (blue).
The Tale of the Tape: AMGN has formed a small rectangle pattern. The possible long positions on the stock would be either on a pullback to $95, or on a breakout above $102. The ideal short opportunities would be on a break below $95, with an expectation of a fall back down to the previous level of $90, or on a rally back up to $102 resistance.
Please share this article
at 12:04 AM No comments: Links to this post

Millennials Will Carry Markets, Economy to Next Level: Don Hays

Born in the '80s, beaten down in the aughts, and considered to be the generation that gets dumped on. That is the short story of the so-called Millennials or Generation Y who have faced more than their share of hardship for most of their adult lives.

But now, as the oldest of an estimated 90 million American millennials begin to turn 35, they will start to be counted on as the next leg in the bull market.

"They have spent nearly 15 years trying to get a good job, that's equivalent to what their talents are," says Don Hays, founder and chairman of Hays Advisory Group, in the attached video.

It's not going to happen overnight, but this veteran economic observer says the effect of a very bright, highly motivated chunk of the population that wants to move out from their parents and find good, steady work is going to be enormous, and familiar.

To be sure, the millennials have faced their share of criticism but as a group they are much more globally oriented and comfortable with new technologies. But even though it could be argued that there is ample reason for millennials to steer clear of stocks, it is already apparent that stocks (e.g. big public companies) are very interested in them.

If Hays is right, it won't be a generation saying "me, me, me" as much as it will be a swarm of pent-up demand saying "more, more, more."
Please share this article
at 12:04 AM No comments: Links to this post

Homebuilders bounced sharply last week thanks to a drop in interest rates on the back of Federal Reserve Chairman Ben Bernanke's latest dovish remarks.

But not so fast. From a technical perspective, despite the bounce, the picture for homebuilding stocks -- such as today's trade setup, PulteGroup (NYSE: PHM) -- is not very pretty.

Along with many other homebuilders, PHM broke its uptrend in April (despite a higher high in May). Furthermore, it is forming a classic head-and-shoulders pattern. Couple these two observations with the fact that interest rates broke significant resistance in the May-to-June period, and PHM looks to be setting up for a fall.

To better understand the technical picture for a particular stock, I always study the sector or group chart first. In the case of the homebuilders, the PHLX Housing Sector Index (HGX) works well for my analysis.

HGX rose sharply off the 2009 broader market lows, and in early 2012, broke past a crucial resistance point, which can be seen on the multi-year chart below. In total, the index blasted higher to the tune of 160% off the higher low made in September 2011 (versus the 2009 lows) into the May 2013 highs. The May highs coincided with the 61.8% Fibonacci retracement of the entire sell-off from the index highs in 2005 down to the lows in early 2009. In other words, HGX found resistance at a crucial point.

Eventually, however, with the advent of higher interest rates in May, the index came crashing down, and by late June, had given up almost 20%. In fact, it retraced 25% (another Fibonacci number) of the entire 2011-2013 rally in roughly one month's time.

Of course, such a sharp correction is nothing unusual because, as I often point out, stocks with slopes that are too steep eventually come back to Earth. More importantly, however, the recent sell-off was enough to break the steep uptrend dating back to 2012 on a weekly basis, and also traced out a large head-and-shoulders formation. HGX is now waving a sell signal.

PHM has a daily chart very similar to that of HGX, and is therefore my go-to name for a short-side trade in the U.S. housing sector. (more)
Please share this article
at 12:03 AM No comments: Links to this post