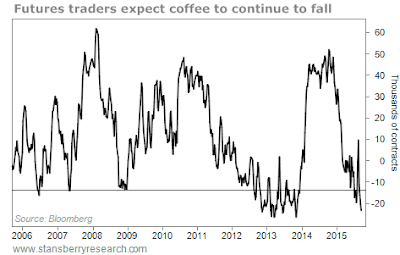 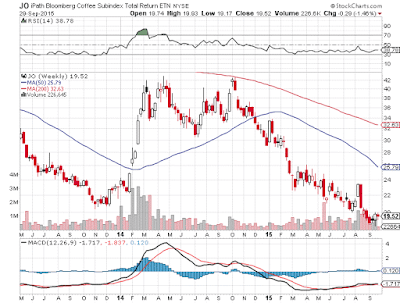 Coffee prices are on the verge of soaring...
Today, investors hate commodities... and coffee is no exception.
The last time we saw a setup like this, coffee prices rocketed nearly 72% higher in just four months. And over the past decade, these opportunities would have led to 25% average gains in just more than four months.
Coffee isn't a "buy" just yet. But a fantastic opportunity is setting up right now.
Let me explain...(more)
at 12:03 AM No comments: Links to this post 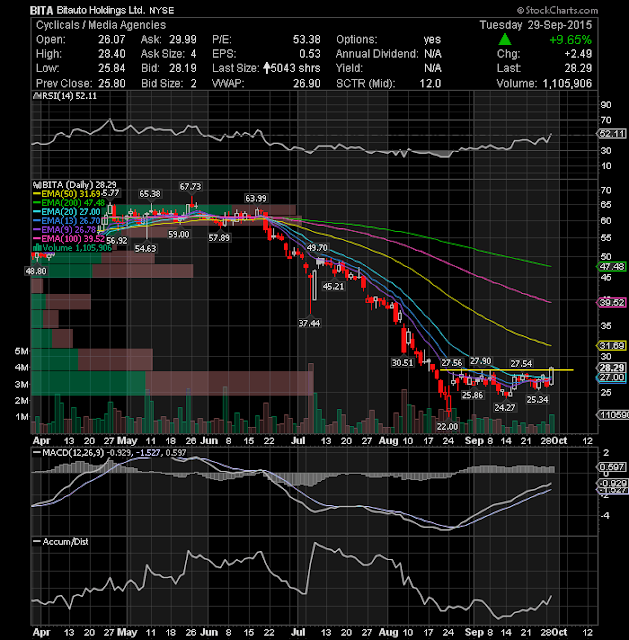 Bitauto Hldg Ltd (NYSE:BITA) could be in the early stages of a technical breakout. A break through today's high on volume could lead this stock to 30-30.51 short-term.
at 12:03 AM No comments: Links to this post 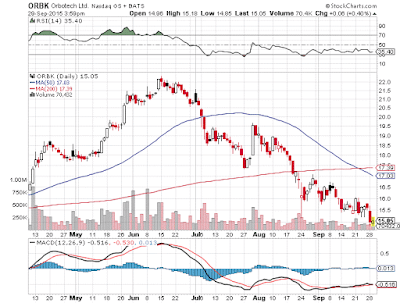 It is no secret that demand for Apple’s (NASDAQ: AAPL) next-generation iPhone, the iPhone 6s, and its new and larger tablet, the iPad Pro, has been huge. While this good news does not yet seem to have a profound effect on Apple’s share price, 1 bottomed out small cap tech stock that is a are beneficiary of these Apple launches could turn into a big winner.

Under the Radar
The most obvious beneficiary of these new technology gadget releases is Orbotech Ltd. (NASDAQ: ORBK), an under-the-radar stock that is a major player in the technology world. The last sentence buried in the company’s description is the key takeaway: Virtually every electronic device in the world is produced using Orbotech systems.

The company has the world’s leading market share in the sale of automated optical inspection equipment used in the production of printed circuit boards, flat panel displays, and other micro-electronic components. With the advancement in technology capabilities and the migration to smaller and thinner components, Orbotech’s inspection equipment ensures there are no defects and thus enhances the production yield for manufacturers all over the world, including the producers of the iPhone 6s.

Illumina, Inc. provides sequencing and array-based solutions for genetic analysis in North America, Europe, Latin America, the Asia-Pacific, the Middle East, and South Africa. The company’s products include sequencing platforms that are based on its SBS technology, which provides researchers with various ranges of applications and the ability to sequence mammalian genomes; and array platforms consist of HiScan and iScan systems, as well as NextSeq 550 system that are array scanners for DNA and RNA analysis applications, including single nucleotide polymorphism genotyping, copy number variations analysis, gene expression analysis, and methylation analysis.
Take a look at the 1-year chart of Illumina (NASDAQ: ILMN) with the added notations: 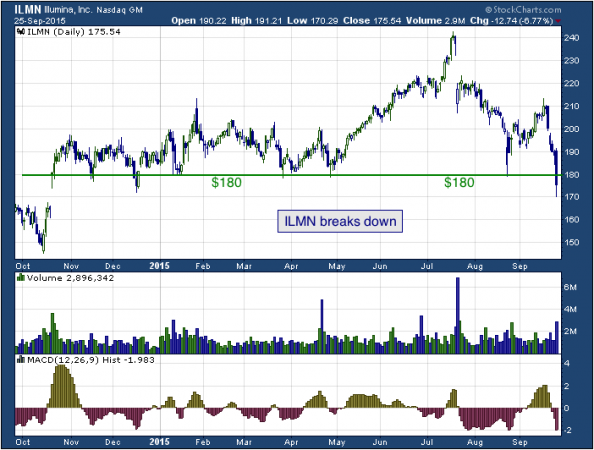 ILMN had gotten stuck trading in a sideways range from October through April. Then, in May, the stock finally broke out and ran all the way up to the mid-$240’s. Unfortunately, in July and August, ILMN fell all the way back down to where it started its rally from back in April. During that entire time, the stock created an important level of support at $180 (green). Now that the stock has broken that support, lower prices should follow.

The Tale of the Tape: ILMN broke a key level of support at $180. A trader could enter a short position on any rallies up to or near $180 with a stop placed above the level. If the stock were to break back above the $180 level, a long position might be entered instead.
at 12:03 AM No comments: Links to this post