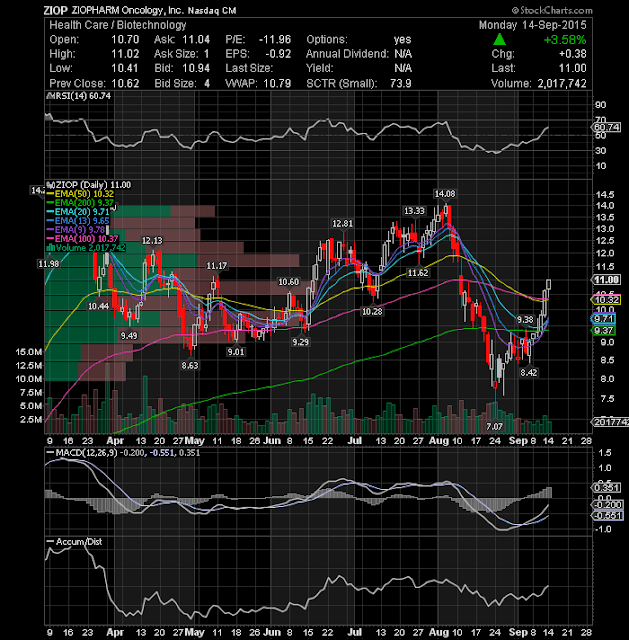 ZIOPHARM Oncology Inc. (NASDAQ:ZIOP) continued to show strength with another gain. Today's rally put shares above the psychological resistance of 11, which is a bullish sign. The technical chart looks very bullish with a short-term target of $11.60. 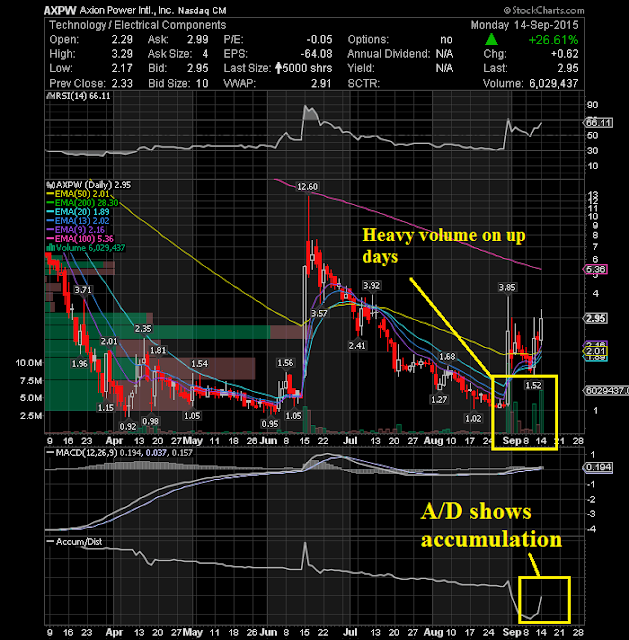 Extremely bullish moves on Axion Power International, Inc. (NASDAQ:AXPW) are taking place over the last session’s. The stock was one of the big winners on Monday, closing up 62 cents on the day. It has been under accumulation for a couple days now. The volume on accumulation days consistently exceeded the volume on distribution days. That's a bullish sign. From a technical standpoint, the MACD chart is still showing an up trend with the MACD indicator above its signal line and is indicating further strength. The RSI value is currently above 60 but it has not reached the overbought territory. Let's keep an eye on AXPW as i think momentum will pick up. Next targets for the stock are $3.85 and $3.92 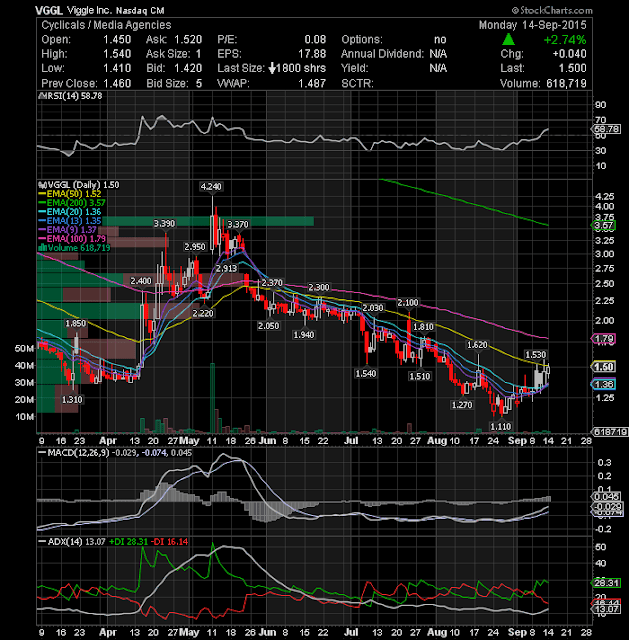 Viggle Inc (NASDAQ:VGGL) is displaying a short upside momentum and is poised to move higher from these levels. Despite the general market weakness, the stock made an impressive turnaround and rallied almost 3% to close the day at $1.50 on volume above average. Short term traders can buy above $1.54 with stoploss at $1.4 and targets of 1.79/2.02. Technical indicators show a continuation of the trend with MACD and RSI rising. 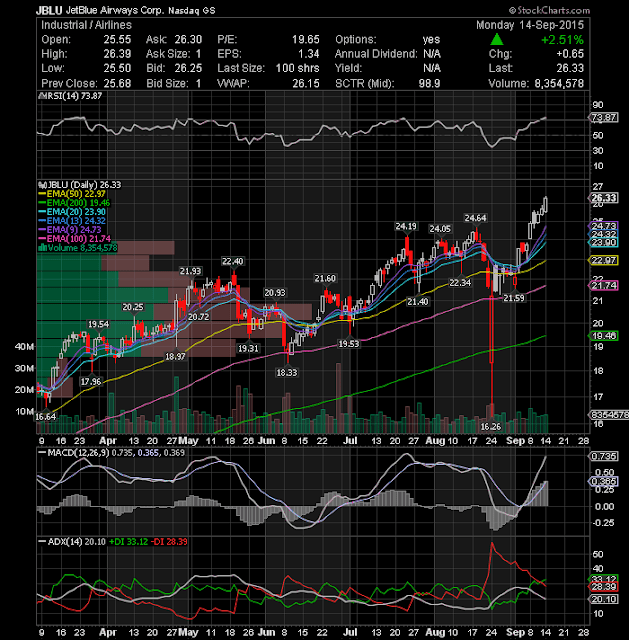 JetBlue Airways Corporation (NASDAQ:JBLU) has broken out to all time highs again. The volume on today’s break was solid, not great, so a sell-stop below $25.50 is probably a good idea. 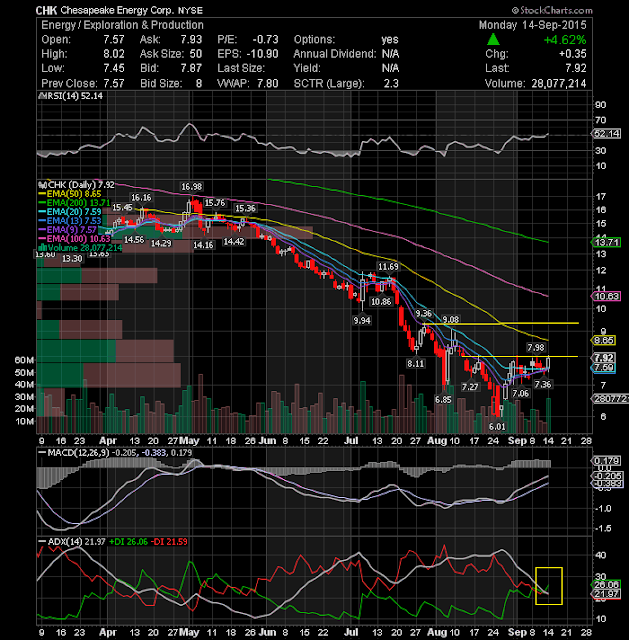 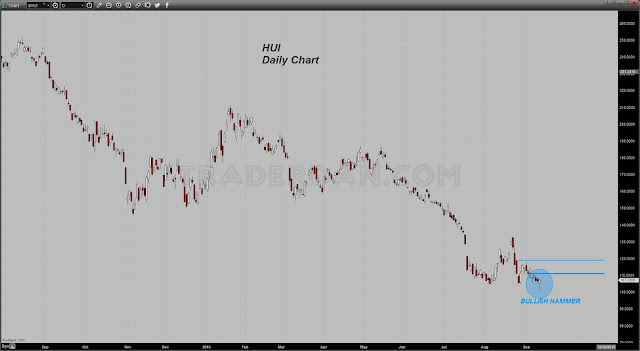 Maybe…based on today’s price action in both the metal and in the mining shares ( HUI), but only short-term.
The shares were actually a bit more convincing than the actual metal, which is something one would like to see anyway if they are looking to be bullish.
The HUI opened lower, promptly fell apart but then began gradually climbing back up off the worst levels of the session as the day wore on. By the time of the close, they had managed to eke out a small gain.  (more)
at 12:03 AM No comments: Links to this post

A Second Big Leg Down Is Coming In Stocks

Take a good look at the long-term chart shown and let it liberate your imagination. It’s not difficult to see the force of gravity at work here, pulling the S&Ps toward a trendline that lies 250 points below. Notice how, when the futures swooned last autumn, the recovery was much steeper and swifter than the decline. Not this time. Three weeks into a bounce that has been punctuated by manic, fleeting short squeezes, stocks have yet to recoup even half of the losses suffered during the last two weeks of August. 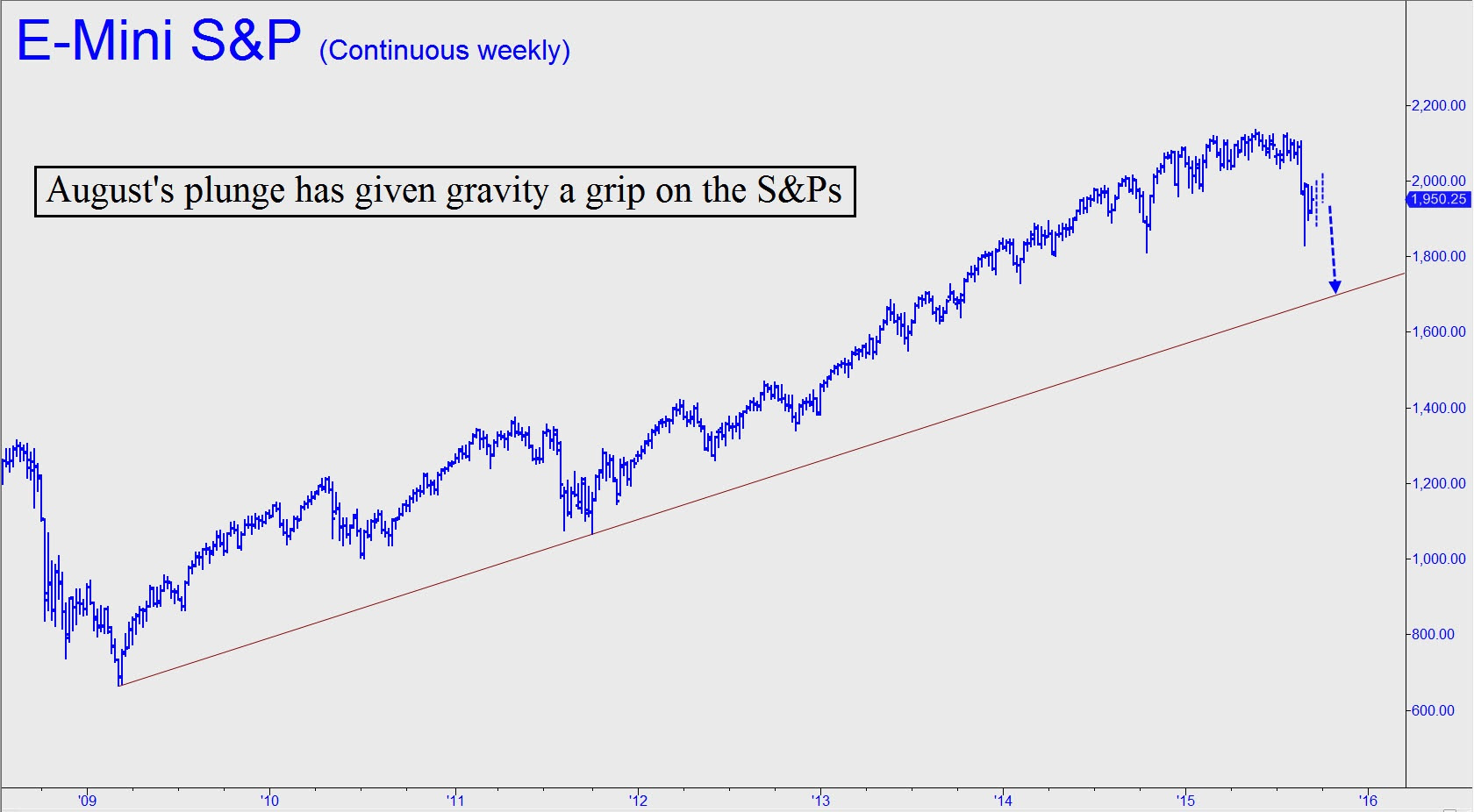 It would seem that the “story” needed to drive a strong rally simply isn’t there. The Fed can’t loosen because rates are already near zero. China’s economy is weakening rather than strengthening, and Europe is now a full-blown basket case. Adding to this disquieting picture, America’s enemies have grown increasingly bold and seem now to be daring Obama, the weakest and most inept U.S. president in history, to do something about it.  Not exactly a comforting picture. Under the circumstances, it seems safe to predict that the S&Ps will fall at least to the trendline shown, currently around 1700. If so, the Dow, now trading for 16433, would fall to 14000 — down 24% from May’s all time high of 18351.
And then what?  Elliott Wavesters might say the chart leaves room for a Wave Five surge to new record highs. That would be hard to imagine, considering that the coming recession, or perhaps depression, will leave the U.S. and global economies in a state of smoldering ruin. Whatever happens, we should keep an open mind. First, though, we’ll look for the broad averages to complete the bearish cycle begun in August with a drop to the trendline. The implication is that any rally in the days or possibly weeks ahead is a gift to those looking to get short.
at 12:03 AM No comments: Links to this post