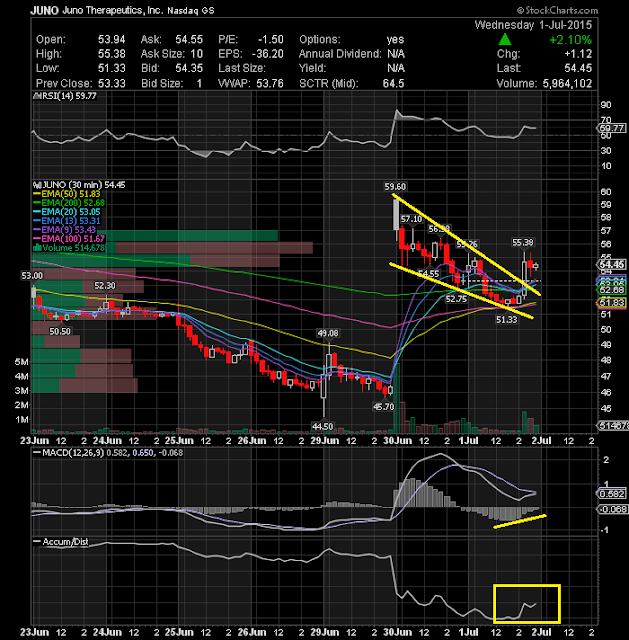 Juno Therapeutics Inc (NASDAQ:JUNO) starting to get some momo once again on 30m chart. The stock showed buying strength all day. The 55-55.38 area is a critical resistance region that can determine overall bias for the stock in short-term. Above this level could test 60 next. Note also that the MACD is about to make a bullish cross. On watch. 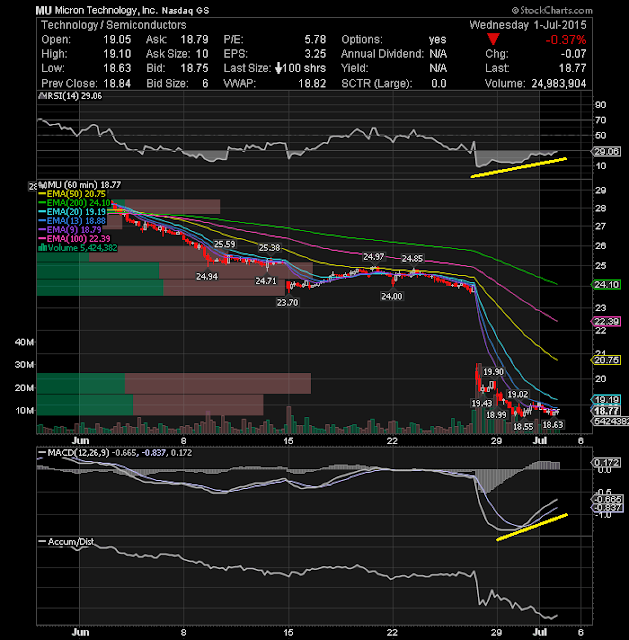 Micron Technology, Inc. (NASDAQ:MU) There was an unusually high call options activity today (strike $20 JAN2017). I believe this could signal a bottom. On the hourly time frame, technical indicators are giving some positive divergences. As noted yesterday, the bounce could start at any time. 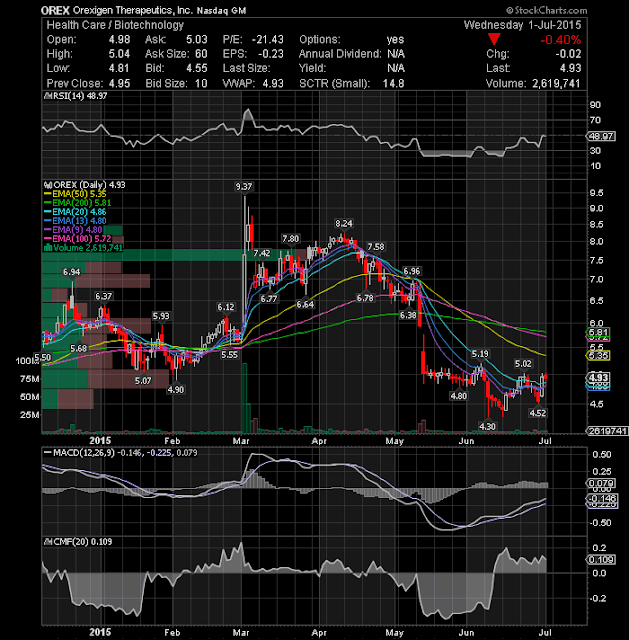 Orexigen Therapeutics, Inc.(NASDAQ:OREX) is looking good to me. I am very pleased about how the stock has pulled back to its EMA13 after its large move on Monday. For the coming days, a breakout above the 5.19 level would signal the start of a new uptrend that could potentially test the EMA200 around the 5.80 area.

McDonald’s Corporation operates and franchises McDonald’s restaurants in the United States, Europe, the Asia/Pacific, the Middle East, Africa, Canada, and Latin America. The company’s restaurants offer various food products, soft drinks, coffee, and other beverages. As of December 31, 2014, it operated 36,258 restaurants, including 29,544 franchised restaurants comprising 20,774 franchised to conventional franchisees, 5,228 licensed to developmental licensees, and 3,542 licensed to foreign affiliates; and 6,714 company-operated restaurants.
Take a look at the 1-year chart of McDonald’s (NYSE: MCD) below with added notations: After rallying in January and February, MCD has been trading mostly sideways since the March 1st peak. During the sideways move the stock has formed a common pattern known as a rectangle. A minimum of (2) successful tests of the support and (2) successful tests of the resistance will give you the pattern.
MCD’s rectangle pattern has formed a resistance at $100 (red) and a $94 support (green). At some point the stock will have to break one of the two levels.

The Tale of the Tape: MCD is trading within a rectangle pattern. The possible long positions on the stock would be either on a pullback to $94 or on a breakout above $100. The ideal short opportunity would be on a break below $94.
Please share this article
at 12:03 AM No comments: Links to this post 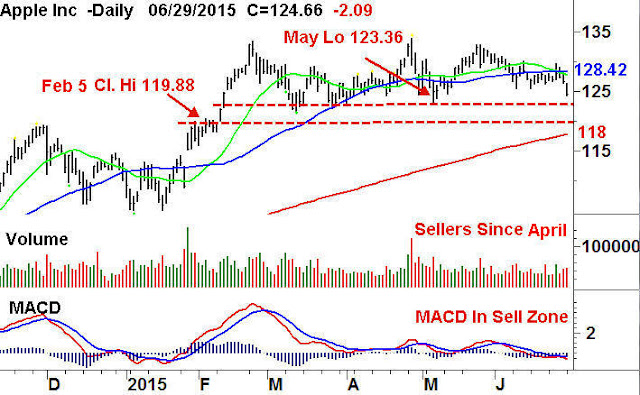 Apple Inc. (AAPL) — The company’s high-tech hardware, including the iPhone, iPad and Mac computers, make it one of the most well-known brands in the world. It is also a leader in customer satisfaction.
Capital IQ expects profits to be enhanced by increased volumes, more common components and an increased focus on software and services. Its analysts believe Apple’s “superior ecosystem” and new product launches will keep iPhone customer retention rates high. While it’s still early, they predict the company’s latest gadget, the Apple Watch, will be a success.
Capital IQ estimates earnings of $8.95 per share for fiscal year 2015 (ending in September), up from $6.45 last year, and $9.54 in FY 2016. Its analysts have a 12-month target of $150 on AAPL stock.
Free cash flow generation is a positive, and the company’s massive cash position of $194 billion can be used for stock repurchases, dividends and acquisitions.
Following a run from about $80 in April 2014 to above $134 in April 2015, AAPL stock has been consolidating in a rectangle with resistance at roughly $135 and support at its May low of $123.36. And under that support line is a trading range of support.
Sellers have dominated since March, but this high-quality technology stock is a traditional target for institutional buyers.
Since the current market crisis has little to do with Apple’s success, I believe it is time for traders to step up and enter orders to buy AAPL stock under $122 for a trade to $150 in four months. With a P/E ratio of 14 times estimated fiscal 2015 earnings, AAPL stock is also suitable for long-term investors who wish to hold shares for an indefinite period of time.