Trade in shares of Italy’s largest bank has been suspended – as it emerges that events in Libya have helped prevent a collapse of the Italian banking system.

UniCredit‘s share price has plunged in the past month because of market fears over eurozone debt – and now share dealing has been halted due to volatility.

Although it may sound far-fetched, the Libyan revolution of the past six months may have saved it and other Italian banks amid the crisis.

The tale of Libya and its Italian bank investment adventure underlines just how far the Gaddafi clan’s influence reached in financial markets throughout the world.

Just how much of these are returned to any future government remains to be seen – but if you look at the extensive investments in Italy, you can find a prime example of where the Libyans have already lost out.

According to documents uncovered by Global Witness, the Libyan Investment Authority’s biggest investment was in Italian bank Unicredit.

The choice is not accidental – Italy was Libya’s colonial parent, the legacy of which is extensive financial and political connections.

Through three of its sovereign wealth funds – the LIA (the most above-board), the Central Bank of Libya and the Libya Foreign Bank (these two were able to invest slightly more secretively) – the regime amassed some 1.4 billion shares in UniCredit.

The Libyan sovereign funds brought their investment in the Italian bank to their current level in early 2010.

Then the second wave of the financial crisis struck, just as the Libyan investments were frozen throughout Europe, preventing Tripoli’s investment officers from pulling out their cash.

In February, the combined stake was worth 2.8bn euros. Today, it is worth a mere 1.2bn euros.

That is a collapse of almost 60% – and the fall is sharper still if you go back to early 2010, when the investments reached their current volume.

Had the Libyan assets not been frozen, one suspects the Gaddafi family might have sold their Unicredit investment, whether because of the bank’s deep troubles or because of their need to free up resources for their fight against rebels.

However, the upshot of the freeze was that Unicredit (which, when the European authorities performed stress tests on their banks had one of the worst balance sheets in the area) was able to rely on its biggest aggregate shareholder not selling its stake and pushing its share price down further.

It is impossible to know how much impact this had on the Italian bank – even a 7.2% stake cannot prevent the remaining 92.8% of shareholders selling out if they so choose.

But the unintended consequence was at least a small relief for the Italian bank as it battled the second wave of the financial crisis. Not to mention a crippling loss for the Libyan sovereign wealth funds.

JP Morgan May Take Over Bank Of America : JPM, BAC 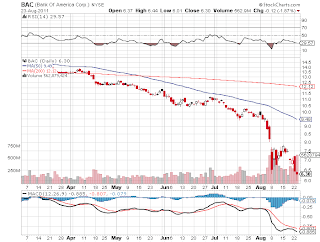 There is a rumor circulated on Wall St. that JP Morgan (NYSE: JPM) will take over Bank of America (NYSE: BAC) within the week. The government will support the deal with a $100 billion investment in preferred shares issued by the combined entity. Alternatively, the government may guarantee the value of a large pool of Bank of America assets. The word is that Treasury Secretary Geithner has discussed the transaction with JP Morgan CEO Jamie Dimon.The “merger” would completely destroy the value of BAC’s common shares.

The government feels that the deal may be necessary as Bank of America struggles unsuccessfully to close several transactions to bolster its balance sheet. The Wall Street Journal reported that Business Insider speculated that the financial firm will need to raise $200 billion which would be another possible event that would wipe out common shareholders.

Bank of America’s fortunes have been hurt by events in just the last few days. A New York State judge agreed to allow institutional investors to intervene in an $8.5 billion settlement between the bank and groups that lost money on mortgage-backed securities. China Construction Bank Corp said Bank of American will continue to hold 50% of its share in the foreign financial firm. Many investors hoped Bank of America would sell its entire stake to raise money. Several analysts believe that the costs of owning mortgage firm Countrywide Credit have grown unexpectedly large.

Under federal law, JP Morgan and Bank of America could not combine because together they would have too large a share of several financial markets in the US. Treasury would apparently work with other government agencies to have those rules suspended and then the new combined bank would sell assets to get back into compliance later.

The government’s preference for a deal with JP Morgan rather than a federal takeover may be because it does not want to set the precedent of Washington owning one of the world’s largest banks “paid for” with taxpayer money.

Note: Credit default swap insurance on the bank’s unsecured debt jumped 64 basis points to 435 basis points, meaning it would cost $435,000 per year for five years to insure $10 million in bonds, according to Markit (via Reuters) 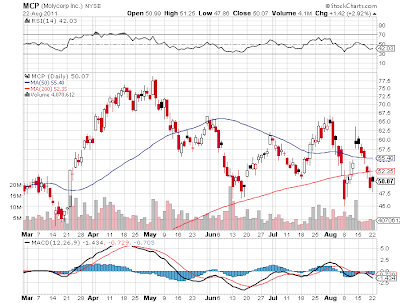 Hallgarten & Company analyst Christopher Ecclestone recently suggested the overabundance of names in the uranium, lithium and rare earths sector may be a case of "killing the goose that laid the golden egg."

"While uranium has had its bust (and false dawn) and largely faded into secondary interest, the REE space has yet to have its day of reckoning," he observed. "The Lithium players, if anything have been spared a rout by the rare earths phenomenon gradually siphoning away interest and thus letting the Lithium subspace ‘down gently.'"

In his analysis, Ecclestone suggested that larger cap rare earths companies "are knitting, unraveling and reknitting their projects (via endless drilling, surface sampling and metallurgical testing) to fill in time waiting for the right ‘gentleman caller'. In the meantime a company like Lynas, whose Mt Weld property two years back was essentially as developed as these others pretenders to being industry majors, has shot ahead and built its mine and nearly finished its processing plant."

"Those that can: do, those that can't: instead have their bloated IR departments send investors every news article about Rare Earths that crosses the wires to try and disguise their lack of any real progress," Ecclestone complained.

"It would appear that the mining promotional ‘art' has reached its apogee with rare earths after practicing on Lithium and Uranium. After the apogee comes the slide," Ecclestone warned. "The number of promoters piling into this space have exceeded all previous efforts..."

Meanwhile, Ecclestone suggested "the fate for most uranium juniors is sealed. We have totally dropped interest in the sector as we feel that all but a few near production stories are doomed to whither and die of lack of funding."

"The problem the survivors face is that struggling out of the ‘Nuclear Winter' is going to be a tough road and the temptations of switching back to being a gold stock or suchlike is going to be more tempting than remaining poor but virtuous and persisting with a uranium theme," Ecclestone asserted. "We would not be surprised to see the number of uranium juniors (i.e. non-producers) globally shrink to less than 50 over the next two years."

In his analysis, Ecclestone outlined the reasons why he thinks so many junior explorers/producers will be surplus to actually demand including:

--Insufficient end users for all of them to make matches with miners. (As an example, Ecclestone notes that Silmet recently confessed to having only 15 clients for its REE production)

--With hundreds of millions of dollars in budget and many REE end-users being small, "the prospect of an end-user being the solution to capital poor REE producer wannabes is not good"

--"End-users of size are showing their own doubts on the seriousness of the ‘juniors' with Toyota walking away from its JV with Great Western on Benjamin River and option for a recycling effort in Vietnam instead, Santoku selling out to Molycorp, and Showa Denko giving in and selling its plant in China."

--Lynas (by virtue of being a first mover)

--Molycorp (by virtue of vertical integration and being a first mover)

--UCore (by being acquired)

In his analysis, Ecclestone suggests Frontier Rare Earths, Arafura Resources and Stans Energy "are a few names that might also cling to the lifeboats."

"The end of the Rare Earth boom is somewhat inevitable as there must be some winnowing process eventually," Ecclestone observed. "That there is demand for 200 or 100 or even 50 of the current flock of prospects is dubious indeed."

The Tea Party vs. The Creature from Jekyll Island

This Is Why Gasoline Prices Have Not Been Falling With Oil

he pump falling too. As shown in the chart below, the price of WTI crude oil has dropped nearly 8% year to date after being up more than 30% earlier this year. RBOB Gasoline, however, was up by similar amounts earlier this year, and it is still up 14% YTD. So what gives?

People should buy gold today because there is a huge run in precious metals recently and I think they need to consolidate and shake out the weak holders, Marc Faber, Gloom, Boom, and Doom Report, who adds that everyone should hold some gold because it is a form of cash. He also weighs in on emerging economies, saying the individual household is not highly leveraged as most in the western world are.

Ben Davies (hindecapital.com) and James Turk, Director of the GoldMoney Foundation, talk about the current fiat currency world monetary system established under “Bretton Woods II”. They explain the imbalances created by the hegemony of the fiat dollar, and how it allows mercantilist vendor financing and the accumulation of huge FX reserves in sovereign wealth funds and other vehicles. Ben Davies thinks that this system is close to the breaking point.

They talk about potential problems in China, and how the Chinese need to import huge amounts of raw materials in order to keep their economy growing. Davies and Turk also explain how China has more gold than they are admitting.

They talk about the economic outlook and how growth is slowing in the US and the EU as the sovereign debt crisis takes its toll. They discuss the probability of further rounds of monetary stimulus, be it QE3 or an equivalent. The two men also explain how this will result in a crack-up boom as described by the Austrian economist Ludwig von Mises. They both see gold as undervalued, but explain the problems of using dollar price targets because the fiat dollar is a changing yardstick. Ben Davies explains that money, like any other good, is affected by supply and demand, which set the price.

They talk about the potential for hyperinflation; Davies comments that hyperinflation is a political phenomenon, and that the conditions for it are in place in many countries. They see the rising gold price as a reflection of the flight from fiat currency into real goods and tangible assets.

They see gold breaking the $2,000 barrier this year and moving exponentially higher. Ben Davies explains that he uses a power-function model to analyse the price of gold, based on Benford’s law.

This interview was recorded on August 4 2011 in London.