A multitude of self-made millionaires (and billionaires) made their fortunes in real estate, often through the development of large-scale projects such as shopping centers or planned communities. On a smaller scale, there are many landlords with one or more rental properties earning them a monthly income.

If you want to profit from real estate but don't have the initial investment for a large-scale development and don't want to deal with the daily hassles of being a landlord, then this investment is for you...

In 1960 Congress created a special investment vehicle called a Real Estate Investment Trust (REIT) as a way to make investment in large-scale, income-producing real estate accessible to all investors. REITs are bought and sold just like stocks and have become quite popular with individual investors.

According to REIT.com, as of Jan. 1, 2012, there were 166 REITs registered with the Securities and Exchange Commission in the United States that trade on one of the major stock exchanges – the majority on the New York Stock Exchange. These REITs have a combined equity market capitalization of $579 billion.  (more)
at 12:07 AM No comments: Links to this post

resourceinvestor.com / by Alasdair Macleod /
An exhaustive study of global physical gold stocks, authored by James Turk with the assistance of Juan Casteñeda of the University of Buckingham is published this morning, and is available in PDF form, here.
The study concludes that the commonly accepted figure of 171,300 tonnes (end-2011) overstates gold stocks by 16,056 tonnes.
In my opinion the principal implications are as follows:
I hope this excellent paper sparks a debate about the consequences for the West of having driven gold out of circulation as a monetary asset, at a time when paper currencies are firmly on the path to their own destruction.
SOURCE
at 12:05 AM No comments: Links to this post

Must-see: How the rich keep getting richer

Video: ‘The rich get richer explained,’ featuring Warren Buff-ay and ‘The Bernank’

Peter Grandich – When Will The Rodney Dangerfield Of Investments Get Some Respect?

Precious Metals raids are common place. But has anything occurred to make a reasonable investor think that the long term prospects of gold and silver has turned negative? Rather, the opposite have happened. Central banks are engaged in unlimited money printing, central banks are buying and precious metals ETF ownership is increasing. Until the general fundamental picture changes, this bull market remains very much alive, regardless what any of the so-called experts proclaim. Rumors of the death of this bull market are greatly exaggerated.

US Households Are Not “Deleveraging” – They Are Simply Defaulting In Bulk

Lately there has been an amusing and very spurious, not to mention wrong, argument among both the “serious media” and the various tabloids, that US households have delevered to the tune of $1 trillion, primarily as a result of mortgage debt reductions (not to be confused with total consumer debt which month after month hits new record highs, primarily due to soaring student and GM auto loans). The implication here is that unlike in year past, US households are finally doing the responsible thing and are actively deleveraging of their own free will. This couldn’t be further from the truth, and to put baseless rumors of this nature to rest once and for all, below we have compiled a simple chart using the NY Fed’s own data, showing the total change in mortgage debt, and what portion of it is due to discharges (aka defaults) of 1st and 2nd lien debt. In a nutshell: based on NYFed calculations, there has been $800 billion in mortgage debt deleveraging since the end of 2007. This has been due to $1.2 trillion in discharges (the amount is greater than the total first lien mortgages, due to the increasing use of HELOCs and 2nd lien mortgages before the housing bubble popped).
Continue Reading at ZeroHedge.com…
at 12:05 AM 1 comment: Links to this post

H&S patterns can also form upside-down after a downtrend as well. This pattern would be called an Inverse Head and Shoulders pattern. It too would be considered a reversal pattern and the neckline would be a resistance rather than a support.

To see such a pattern potentially being formed, please take a look at the 1-year chart of WLT (Walter Energy, Inc.) below with my added notations: 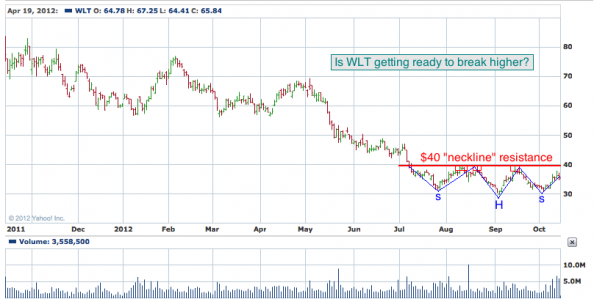 After moving lower for the entire year, WLT has almost formed what appears to be an Inverse H&S (blue). I have noted the head (H) and the shoulders (s) to make the pattern more visible. (For future reference, if you imagine this pattern flipped upside down you would have a regular H&S pattern.) WLT's "neckline" is at the $40 level (red). WLT would confirm the pattern by breaking up through the $40 resistance, and if it does, the stock should be moving higher from there.

Keep in mind that simple is usually better. Had I never pointed out this Inverse H&S pattern, one would still think this stock is moving higher simply if it broke through the $40 resistance level. In short, whether you noticed the pattern or not, the trade would still be the same: On the break above the key $40 level.
at 12:04 AM No comments: Links to this post

Here Is What To Look For Next On Gold, Silver & Oil

Tom Fitzpatrick has just released an update on both the gold and crude oil markets. Fitzpatrick has been astonishingly accurate in forecasting the movements of gold and silver. Keep in mind that Fitzpatrick had been calling for gold to correct after hitting the $1,791 level that he predicted would act as resistance. Now he lets KWN readers globally know what to expect next since gold has weakened. Remember, silver should trade with gold.
Here is what top Citi analyst Fitzpatrick had to say in his latest report, along with some powerful charts: Gold saw three weeks of indecision just below the important double bottom neckline at $1,790. These indecision weeks were followed by a down week last week suggesting short term losses now. Weekly momentum is also stretched and crossing back down.
A correction down to $1,661-$1,669 could be the danger in the near term before renewed gains later. This is where the 55 week moving average and 50% retracement of the last rally converge. Short term support is at $1,736 and it should be noted that the 200 day moving average comes in at $1,660, i.e. it converges with the 55 week moving average so should provide good support if/when tested.
Dan Norcini continues @ KingWorldNews.com
at 12:04 AM No comments: Links to this post