A Little-Known Indicator Nailed the May Sell-Off; What's It Saying Now?

Let's get one thing straight -- there is no perfect indicator, and no one indicator is always right. As traders, it is our job to be totally objective and trade what is in front of us -- with no biases. This is sometimes much easier said than done, but it is necessary for successful trading over the long-term.

If you've been following me this year, then you know that I was bullish to start the year, yet saw some cracks in the armor back in April. In fact, I wrote this bearish article within days of the April peak. Of course, I had no idea that was the peak, but I was doing my best to take a subjective look at the market. Then, by early June and after a 10% correction, I saw signs that we were bottoming. And by mid-June, I was looking forward to a surprise summer rally. It's nice when it works, but we are all only as good as our last trade. And eventually, we'll all be ridiculed by this cruel thing we call the stock market. Me, I'm staying bullish here.

I've talked a lot recently about all of the negativity that is still out there -- even after huge gains the past few years -- and why this is bullish from a longer-term contrarian point of view. Today, I want to take a purely technical look at a lesser known technical indicator, an indicator that actually nailed the huge sell-off in May.

Near the end of April, I looked at the average true range (ATR) and surmised it was warning of coming weakness. After one of the worst Mays in years, I think I was sold that this is one indicator I had better pay closer attention to.

You can read more about Welles Wilder's indicator here, but the quick summary is it has nothing to do with price trend. Instead, it focuses solely on price volatility. Below is my takeaway from late April (accompanied by a chart), before the May sell-off.

Take a look at the S&P 500 Index (SPX) going back to right before the May 2010 flash crash. On three occasions, the ATR began to turn higher, well ahead of some large sell-offs. In other words, this has been a warning of coming pain. Now look at the recent action over the past month. Once again, this indicator is turning higher. We've already seen some weakness in the SPX recently, but should the ATR continue to trend higher, it could suggest more selling is in the cards. This is one to watch.

So, what's it saying now you ask? To me, this is a nice picture. The bottom line is, you want to see a lower-trending ATR, coupled with higher prices. Currently we have both of these things happening, and as long as this is the case, I continue to think this supports higher prices.

Chart courtesy of StockCharts.com
at 12:07 AM No comments:

Marc Faber: A Balanced Approach to the Next Ten Years

A Look at This Week’s Show:
- Bubbles in earnings and treasuries
- Governments by nature are devious
- Gold as insurance against political stupidity

Today 40 year veteran, Robert Fitzwilson, wrote the following piece exclusively for King World News. Fitzwilson, who is founder of The Portola Group, put together a fascinating piece which covers everything from the 90s bubble, to gold, silver and energy. Below is Fitzwilson’s piece.

Warren Buffett – arguably the greatest investor in history – put a fresh $23.9 billion dollars to work in new investments in the third quarter of 2011.
It's "the most in at least 15 years," according to Bloomberg.
As usual, Buffett is taking advantage of all the turmoil in the markets these days... "The cheaper stocks get, the better I like to buy them," Buffett said in September.
Buffett put nearly $24 billion of cash to work through his company – Berkshire Hathaway...
Shares of Berkshire Hathaway are a "buy" in my True Wealth newsletter. Berkshire is trading near its "book value" – which is a (very rough) gauge of liquidation value.
Whenever you can put your money with the greatest investor in history at close to liquidation value, you should...
According to the latest annual report from Berkshire Hathaway, Buffett has grown the company's book value by 490,409% from when he took over through the end of 2010. (Yes, that's 490,409% growth – that's not a misprint!)
With that kind of extraordinary track record, you'd think investors would be willing to pay a premium for his skills. Usually they are. Take a look at the chart below... 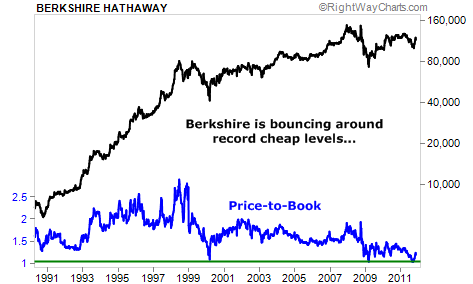 You can see that the stock traded for about two times book value in the late 1990s. And it traded around 1.5 times book value for most of the 2000s, until the financial crises.
Over the last 20 years, shares of Berkshire Hathaway haven't gotten as cheap as they are today (trading near book value) very often...
* In 1992, they almost got as cheap as they are today... and the shares nearly doubled in a year.
* In 2000, they fell to near book value... and the stock rose 50% in a year.
* In March 2009, the shares bottomed near book value. They soared about 70% over the next year.
Dan Ferris, a longtime friend who writes the investment letter Extreme Value, recently estimated a "fair value" for shares of Berkshire Hathaway for his subscribers. Dan's fair value for Berkshire is about 56% higher than its share price today (and Dan's math seemed conservative to me).
Two weeks ago, Dan told his Extreme Value subscribers, "If you asked me for one that's a perfect place for new subscribers to begin taking advantage of our ideas, I'd have to choose Berkshire Hathaway."
Last month, Buffett put a fresh $24 billion to work in investments. He was simply following his own advice to "be fearful when others are greedy, and greedy when others are fearful."
Others are fearful. It's time for you to be greedy... and consider buying shares of Berkshire Hathaway today. They come in "A" shares and "B" shares... they're different prices, but they'll perform the same.
Today they're not trading at much of a premium at all over book value. This situation rarely happens. When it does, take advantage of it! History shows you should be well rewarded.
at 12:04 AM No comments:

Ellis Martin Report with Dudley Baker–Preparing to Go “All In.”

Back to the (VIX) Futures

Breaking News: The CBOE Market Volatility Index (VIX) is very low. I’ve heard that 5,000 times in the past couple of weeks. The market is very slow and non-volatile, it's late summer, and… Well, look -- it's certainly on the low end, but it's hard to justify really paying up for options here, so I can’t see it's so colossally out of line.

You know what’s not very low, though? VIX futures. August futures expire at the open today, so by the time you read this, they won’t exist. September VIX futures trade around 18.5, or a rather large $4 premium or so to VIX itself. November futures trade at 22.5, or an extremely large $8 premium to VIX itself. January 2013 VIX trades at 25.5, or a (insert impressive-sounding adjective) large $11 premium to VIX. January sounds like a while from now, but it's only about five months away, so that’s a pretty interesting bet on a future VIX rally.

Oh, and there’s this recent tweet from the CBOE:

Clearly, the picture from the options world is more mixed than the VIX itself would lead us all to believe. The futures strongly suggest that the marketplace considers the current mid-teens levels to turn into a blip, followed by spiking volatility into fall and winter.

Before deciding what to read into it, consider that the steep slope of the futures curve (the term structure) is somewhat unprecedented. Remember the iPath S&P 500 VIX Mid-Term Futures ETN (NYSEARCA:VXZ)? It's just like our friend iPath S&P 500 VIX Short Term Futures TM ETN (NYSEARCA:VXX), but it tracks VIX futures with four-to-seven-month duration. It had stayed largely immune to the Contango issues that help destroy VXX over time, as the slope of the VIX curve out that far generally stayed flat. Not anymore; it's now at a record-steep slope, per Bill Luby.

So, it all comes down to what you believe about the VIX, and options sentiment in general. If you believe options reflect smart money, then the VIX futures curve should get you kind of bearish. I mean, prices are very high vs. VIX, and open interest is spiking.

If you believe options sentiment is a contra tell, then this will all seem very bullish. If they’re paying up for future protection, dollars to donuts (mmm, donuts) they are wasting money.

There are no absolutes, of course, only time will tell, but I tend to lean towards the former camp when dealing with individual stock options and the latter when dealing with index options. In other words, if someone’s loading up on puts and volatility is spiking in an individual name, particularly a smaller one, I’d tend to think it's smart money and wouldn’t want to fade it. If it's happening in an index, though, I believe the opposite -- it's nervous money that’s paying up for insurance they don’t need.

Good Morning,
Yesterday was a great session with stocks putting in a top and distribution selling stepped in right on queue. A lot of investments looked as though they were about to reverse. Bonds were set to rally, stocks were set to fall, dollar index was ready to bottom and volatility was primed for a pop. Members of my trading alert service TheGoldAndOilGuy were asking me why I only went long VXX and not all of them?

My answer to that is because they are all the same trade almost. If any of those fail to reverse it means the others will likely not reverse either. Thus we would have 4 losing trades at the same time. Instead I measure the potential profits and risk for each investment then pick the one which I feel has the best potential which happened to be the VXX trade I took yesterday. We pocketed 4.25% – 5% in one day and still hold a runner for much larger gains. This sure beats the performance of all the other investments we were looking at yesterday.

This morning’s video analysis covers a lot of interesting and educational points on the market so be sure to watch it right now and stay ahead of the market.

- Dollar index looks to be bottoming as we expected on Monday.
- Crude oil is going to be choppy up at resistance for some time. No trade for weeks there likely.
- Natural gas is trying to break out of a mini basing pattern and I may get long UNG today.
- Gold, silver and gold miners are starting to have signs of a trend reversal to the upside but still not there yet.
- Bonds look to have bottomed yesterday bouncing 1%. I feel there is another 1% bounce left before it runs into resistance.
- SP500 is showing signs of distribution selling and has broken its first support trend line. With any luck we see another 4-5% drop is price.
- VIX moved higher with the SP500 yesterday as it broke to new highs. This is the opposite of what it should have done and one of the reasons why I jumped into VXX yesterday. Rising stocks prices and rising fear means the big money players are buying insurance for a drop near term because they are not confident about the new highs.