The Numbers That Must Hold for Stocks’ Advance to Continue

Stocks fell for the second day on a troubled economic outlook for Spain. The decline was the second-biggest of the year for the S&P 500 as traders considered Europe’s recurring problems coupled with a Fed that gave little encouragement for any additional stimulus.

Financial, materials and technology sectors turned in the worst performance. At the close, the Dow Jones Industrial Average was down 125 points to 13,075, the S&P 500 fell 14 points to 1,399, and the Nasdaq lost 45 points at 3,068. The NYSE traded 834 million shares, and the Nasdaq crossed 492 million. Breadth was negative with decliners ahead of advancers by over 4-to-1 on the Big Board and Nasdaq.

The Nasdaq, the leader of the charge from mid-December to now, has apparently stalled at 3,130. The index had an opportunity late in the day to recover, and did manage to hold above the support line at 3,040 with a low of 3,052. It also bounced to just above its 20-day moving average at 3,066, but any further decline will penetrate not only those support lines but the near-term uptrend line at about 3,040.

The S&P 500’s chart is similar to the Nasdaq’s, but with lower volatility. Yesterday it held above its first line of support at 1,390 and closed smack on its 20-day moving average. Also like the Nasdaq, its intraday low held at the near-term trendline.

Its biggest challenge is to hold at the all-important support at 1,371, because just under that line is the advancing upward 50-day moving average now at 1,369. It too is under a sell signal from the stochastic.

Conclusion: This is the second test of highs for both indices with further declines looking like a reversal from a double-top. We expect corrections — no market advances forever — and it was predictable that the advance would stall close to the current tops.

Now, however, the support lines will be tested, and they must hold if the overall advance is to resume before the dreaded month of May.

The most important lines of support are the 50-day moving averages. A break under them would put the intermediate uptrend in jeopardy, and trading could evolve into a months-long sideways struggle that could last into the fall.

Detailed charts show U.S. Treasurys could be in serious trouble

Tuesday was a pivotal day for the Bond Market. It had been trying to recover since a fall earlier in the month before the release of the Fed minutes took the wind out of it. As measured by the ETF, $TLT, it had already shown significant damage on the monthly chart, below. The Relative Strength Index (RSI) is heading lower, the Moving Average Convergence Divergence (MACD) indicator is heading for a bearish negative cross as price moves back toward the falling 20 month Simple 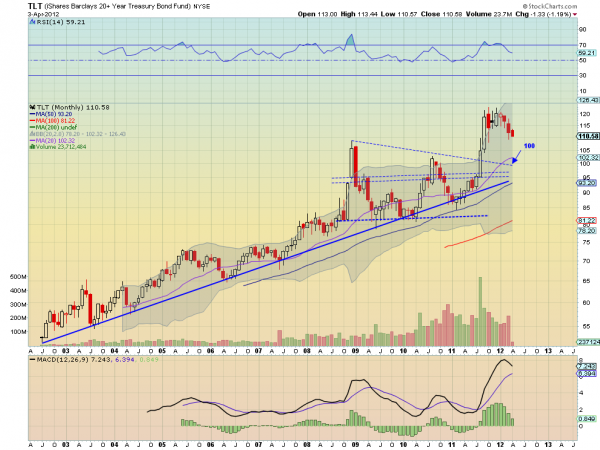 Moving Average (SMA). The weekly look is not any better. The RSI is nearing a turn to bearish and the the MACD has been negative and growing for some time. The move Tuesday is testing the bottom of the short bear flag with a Measured Move below to 107.50, but no real support until 100. 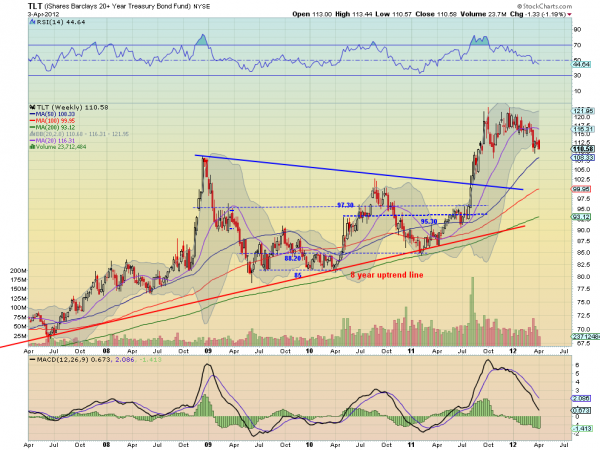 A clear bias lower on the weekly timeframe with only 110 holding it up. But it was the move on the daily chart Tuesday that could be the catalyst for the move lower. The break of the bear flag lower gives a Measured Move to 106. But as seen in the chart below there is no real reason for it to stop there. There is an abyss of previous volume until it hits 95.70. the RSI is bearish and heading lower 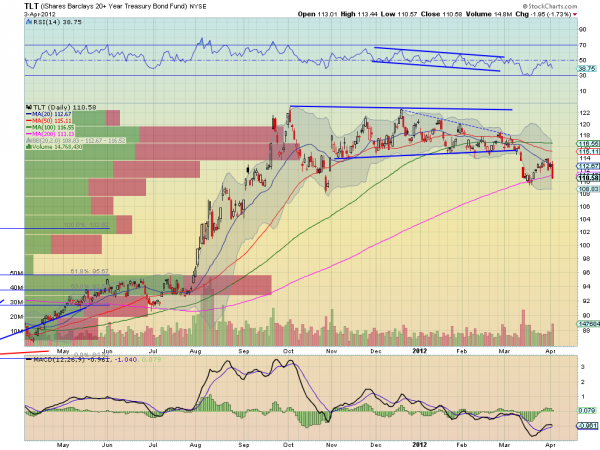 and the MACD is about to cross negative. The lights are going out. The fire has turned to a couple of smoldering timbers. The music has died. 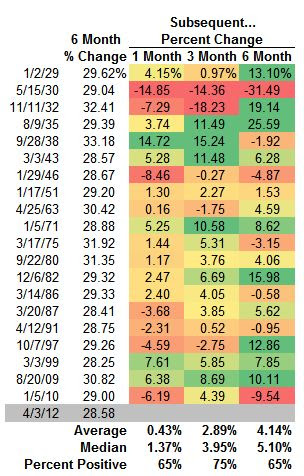 Roughly six weeks later, Apple has now firmly left the par­a­bolic stage and has gone straight to the ver­ti­cal (see Here) hori­zon. What was a 20 year per­for­mance record of 2900% in Feb­ru­ary — quickly became over 4000%.

I find it inter­est­ing and note­wor­thy, that after yes­ter­days once again buoy­ant bid — Apple has pulled up next to Microsoft's mar­ket cap high from 2000 of roughly 586 bil­lion. The fol­low­ing chart has strik­ing bal­ance, albeit a pro­nounced head and shoul­ders top — when expressed through the rel­a­tive per­for­mance of the SPX and MSWORLD indices.

Regard­less of pub­lic opin­ion, both the informed and the igno­rant — a move such as this is unsus­tain­able for Apple and very likely marks a his­tor­i­cal high­point for the com­pany for some time. With that said, and as proven on a daily basis since early Decem­ber, mar­kets can remain irra­tional much longer than most suspect.
It should be noted that both pre­vi­ous suc­ces­sors to the title of World's Largest Mar­ket Cap (that went par­a­bolic) — cer­tainly did not go bust, but main­tained a lead­er­ship posi­tion within their respec­tive indus­tries. Their val­u­a­tions sim­ply matured and loss the enor­mous momen­tum drive that pro­pelled them to unsus­tain­able growth trajectories.
Unless of course it is dif­fer­ent this time...
at 12:04 AM No comments: Links to this post

Devon Energy is fundamentally sound and a technical success

Devon Energy Corp. (NYSE:DVN) — This independent energy company is primarily engaged in the exploration and development of oil and natural gas. It has shifted its strategy to increase exposure to natural gas liquids (NGL) production, given the higher margins in NGL versus natural gas.

Technically DVN broke to an uptrend in early February, by penetrating a four-month triangle. It jumped over 10 points to $76 and has been consolidating within a very bullish flag.

The objective is $84 for traders. But this is a stock that should be in the portfolio of all long-term investors due to its quality and technical success.

The Basics Of Currency Trading

The investment markets can quickly take the money of investors who believe that trading is easy. Trading in any investment market is exceedingly difficult, but success first comes with education and practice. So, what is currency trading and is it right for you?

The currency market, or forex (FX), is the largest investment market in the world. Each day, it accounts for roughly $1.5 trillion of daily trading compared to only $25 billion of daily volume on the New York Stock Exchange (NYSE). The market may be large, but until recently the volume came from professional traders, but as currency trading platforms have improved more retail traders have found forex to be suitable for their investment goals.

How Does It Work?
Currency trading is a 24-hour market that is only closed from Friday evening to Sunday evening, but the 24-hour trading sessions are misleading. There are three sessions that include the European, Asian and United States trading sessions. Although there is some overlap in the sessions, the main currencies in each market are traded mostly during those market hours. This means that certain currency pairs will have more volume during certain sessions. Traders who stay with pairs based on the dollar will find the most volume in the U.S. trading session.

Pairs and Pips
All currency trading is done in pairs. Unlike the stock market, where you can buy or sell a single stock, you have to buy one currency and sell another currency in the forex market. Next, nearly all currencies are priced out to the fourth decimal point. A pip or percentage in point, is the smallest increment of trade. One pip typically equals 1/100 of 1%.

Retail or beginning traders often trade currency in micro lots, because one pip in a micro lot represents only a 10 cents move in the price. This makes losses easier to manage if a trade doesn't produce the intended results. In a mini lot, one pip equals $1 and that same one pip in a standard lot equals $10. Some currencies move as much as 100 pips or more in a single trading session making the potential losses to the small investor much more manageable by trading in micro or mini lots.

Far Less Products
The majority of the volume in currency trading is confined to only 18 currency pairs compared to the thousands of stocks that are available in the global equity markets. Although there are other traded pairs outside of the 18, the eight currencies most often traded are the U.S. dollar (USD), Canadian dollar (CAD), euro (EUR), British pound (GBP), Swiss franc (CHF), New Zealand dollar (NZD), Australian dollar (AUD) and the Japanese yen (JPY). Although nobody would say that currency trading is easy, having far less trading options makes trade and portfolio management an easier task.

What Moves Currency?
An increasing amount of stock traders are taking interest in the currency markets because many of the forces that move the stock market also move the currency market. One of the largest is supply and demand. When the world needs more dollars, the value of the dollar increases and when there are too many circulating, the price drops.

Other factors like interest rates, new economic data from the largest countries and geopolitical tensions, are just a few of the events that may affect currency prices.

The Bottom Line
Much like anything in the investing market, learning about currency trading is easy but finding the winning trading strategies takes a lot of practice. Most forex brokers will allow you to open a free virtual account that allows you to trade with virtual money until you find strategies that work for you.

Chart of the Day - Gartner (IT)

The "Chart of the Day" is Gartner (IT), which showed up on Wednesday's Barchart "All Time High" list. Gartner on Wednesday posted a new all-time high of $43.34 and closed up 0.28%. TrendSpotter has been Long since Jan 19 at $37.15. In recent news on the stock, Gartner on Feb 7 reported Q4 EPS of 46 cents versus the consensus of 47 cents. Gartner, with a market cap of $4 billion, is a research and advisory firm that helps clients understand technology and drive business growth.