The Obama administration lacks the “political capital” for serious financial reform, and that is putting the U.S. in a perilous fiscal position, writes former Clinton White House economist Nouriel Roubini.

In his column in Forbes magazine, Roubini, a professor of economics at the Stern School of Business at New York University and chairman of Roubini Global Economics, a consulting firm, notes that the president’s “waning political capital” will stand in the way of achieving the left’s fiscal, social and economic goals.

The administration has proposed a new budget, as well as a tax on banks, and is actively marketing the ideas, but these proposals fall short of the required “aggressive fiscal reforms” to make America competitive again, writes Roubini. (more)
at 3:23 AM No comments: Links to this post 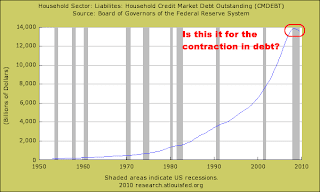 But even when we look at the balance sheet of the government, things are still not improving: (more)

All Hell Could Break Loose in Europe This Week; CDS Counter-Party Risks Again

The entirely pointless G7 meeting this weekend only served to underline the fact that Europe is again entering a serious economic crisis.

At the end of the meeting yesterday, Treasury Secretary Tim Geithner told reporters, “I just want to underscore they made it clear to us, they the European authorities, that they will manage this [the Greek debt crisis] with great care.”

But the Europeans are not being careful – and it’s not just about Greece any more. Worries about government debt and associated public sector liabilities (e.g., because banking systems are in deep trouble) have spread through the eurozone to Spain and Portugal. Ireland and Italy are next up for hostile reconsideration by the markets, and the UK may not be far behind... (more)
at 3:15 AM No comments: Links to this post