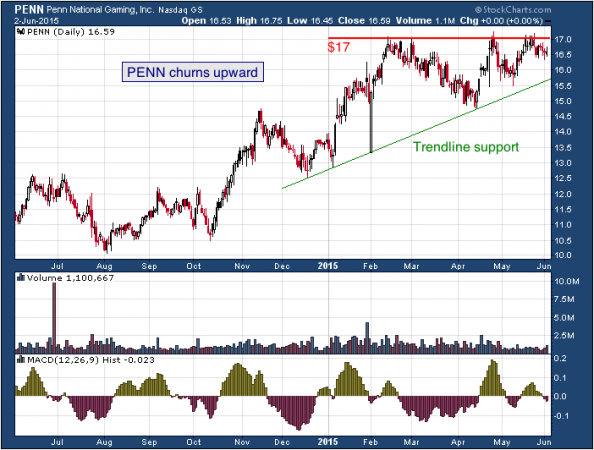 PENN has formed a clear resistance at $17 (red) over the last 4 months. In addition, the stock has been climbing a trend line of support (green) since the middle of December. These two levels combined had PENN stuck within a common chart pattern known as an ascending triangle. Eventually, the stock will have to break one of those levels.

The Tale of the Tape: PENN is trading within an ascending triangle. A long trade could be made at the trendline support or on a break above $17. A break below trendline would be an opportunity to enter a short trade.
Please share this article
at 12:03 AM No comments: Links to this post 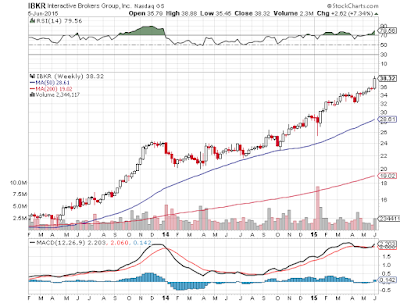 The Chart of the Day belongs to Interactive Brokers Group (IBKR).  I found the stock by sorting the All Time High list for the stocks with the best technical buy signals then used the Flipchart feature to find the chart I liked.  Since the Trend Spotter signaled a buy on 4/22 the stock gained 8.96%.

Interactive Brokers Group is an automated global electronic market maker and broker specializing in routing orders and executing and processing trades in securities, futures and foreign exchange instruments on more than 70 electronic exchanges and trading venues around the world. As a market maker, they provide liquidity at these marketplaces and, as a broker, they provide professional traders and investors with direct access to stocks, options, futures, forex and bonds from a single IB Universal AccountSM.

Fundamental factors:
The 50-100 Day MACD Oscillator has been a reliable technical trading strategy to use n this stock.
Please share this article
at 12:03 AM No comments: Links to this post