This Could Trigger the Biggest Correction Since 2008 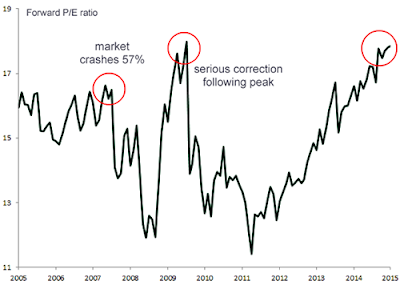 Today could be critical to your financial future.
The red flags I'm seeing right now are eerily similar to what I saw before several major corrections.
For example, on July 18, 2014, I warned that the Russian market was in trouble. Sanctions were starting to take hold, and its economy was cracking.
I predicted we would see "dramatic negative reversals in growth and earnings" of the top holdings in the Market Vectors Russia ETF (NYSE: RSX). This, I reasoned, would cause the fund to correct by at least 10% within three months.  (more)

Range Resources Corporation, an independent natural gas, natural gas liquids (NGLs), and oil company, engages in the acquisition, exploration, and development of natural gas and oil properties in the United States. It holds interests in developed and undeveloped natural gas and oil leases in the Appalachian and Midcontinent regions. The company owns 7,582 net producing wells and approximately 1.4 million net acres under lease in the Appalachian region; and 653 net producing wells and approximately 383,000 net acres under lease in the Midcontinent region.
Take a look at the 1-year chart of Range (NYSE: RRC) with the added notations: 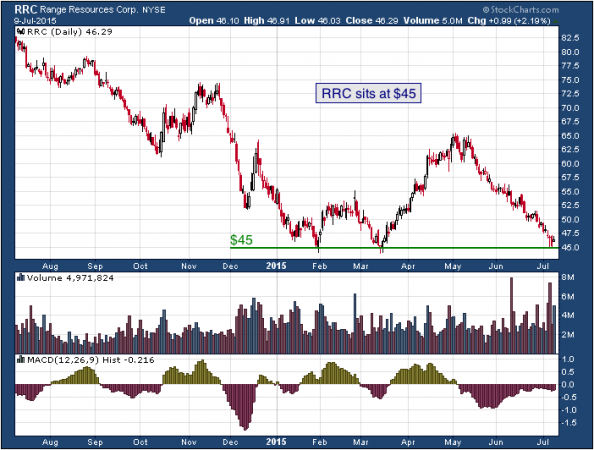 RRC declined consistently into the beginning of 2015, but the stock finally bottomed in January, eventually finding support at $45.00 (green). RRC hit that support level once more in March. Now that the stock appears to be falling back down to that support level again, traders could expect some sort of bounce. However, if the $45.00 support were to break, lower prices should follow.

The Tale of the Tape: RRC has an important level of support at $45.00. A trader could enter a long position at $45.00 with a stop placed under the level. If the stock were to break below the support a short position could be entered instead. 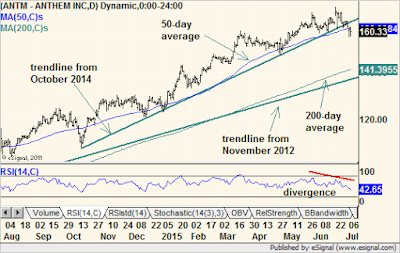 Health care is one investment theme that's certainly in vogue right now. While traditionally considered a defensive sector, I've heard numerous pundits declare its classification has changed from defensive to growth.
I always find it interesting when people change their long-held assumptions about the market. Think about what happened when traders began to substitute "eyeballs" for "earnings" in the P/E ratio during the dot-com bubble, for example. Eventually, the market usually reminds them who's boss.
Health care has been leading the market for many months, with the Health Care Select Sector SPDR ETF (NYSE: XLV) posting an 8% gain year to date as the broader market has moved sideways. Plus, the relative performance charts of most health care indexes versus the S&P 500 continue to point higher.  (more)