Veteran quantitative investor, Charles Nenner of Charles Nenner Research Center uses the skills he honed as a proprietary trader at Goldman Sachs to search for cyclical patterns within market data. His cycles work indicates that a bottom is likely in place for the precious metals sector. His sophisticated neural network models remove human emotion from trading systems, enhancing returns. He’s in the deflation camp, because the herd are positioned for inflation. Nevertheless, gold remains an essential investment choice amid deflationary conditions, since virtually all other asset classes will likely implode. But inflationists will be vindicated, hyperinflation will stage a comeback within 4-5 years. The best examples of what to expect are the precedents set by the financial fiascoes in Cyprus, Greece and the European periphery, where savings and pension accounts were raided without compunction or retribution. He outlines a unique speculative opportunity involving the VIX index, which includes options for risk-takers or an ETF for the risk-averse.
Click Here to Listen 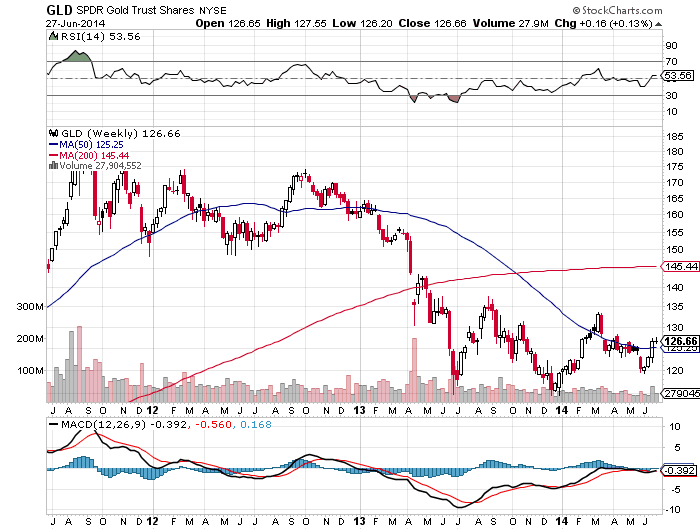 from Silver Doctors:
On June 4, 2014 Gold made a Cycle bottom, turned up on June 5, 2014, exploded higher June 19 post-FOMC. June 27, 2014, Gold completes its Cycle Turn Date Top with a down Cycle into the summer low STARTING on July 1 – 2, 2014!
This June 2014 rally has been nothing more than a short squeeze & ‘False’ Breakout! After a 3-Year Bear and a Final Summer corrective Low ahead, none but the Resolute Bulls will be left standing to experience a Moon Shot to $2000 by year end! …and ‘year end’ may not exactly mean the end of the year.
Cycle work allowed me to called then Silver $49 top, the $1900 Gold top, the June 28, 2013 Gold BOTTOM within 2-hours, the December 31, 2013 retest and higher low. The coming summer low will be the FINAL ENTRY LOW and the Back-Up-The-Truck ‘Buy-of-a- Lifetime’ before a Moon Shot to $2000 by year end!
Read More @ SilverDoctors.com

Today former US Treasury official, Dr. Paul Craig Roberts, told King World News that the entire United States gold hoard, including gold supposedly held at the Fed for other countries, is now gone. This is very bad news for Germany and other countries which have trusted the Fed to safely store their gold. Below is what Dr. Roberts had to say in this remarkable interview.
Eric King: “Dr. Roberts, I know you’ve seen the report on Bloomberg about Germany (all the sudden) supposedly being happy with storing their gold at the New York Fed. It seemed to be a propaganda piece. What was your take when you saw that?”
Continue Reading at KingWorldNews.com…
Please share this article
at 12:05 AM No comments: Links to this post

Last Time Lenders Did This, They Triggered The Financial Crisis

During the first quarter, 3.7 million credit cards were issued to subprime borrowers, up a head-scratching 39% from a year earlier, and the most since 2008. A third of all cards issued were subprime, also the most since 2008, according to Equifax. That was the glorious year when “subprime” transitioned from industry jargon to common word. It had become an essential component of the Financial Crisis.
As before, subprime borrowers pay usurious rates. These are people who think they have no other options, or who have trouble reading the promo details, or who simply don’t care as long as they get the money. In the first quarter, the average rate was 21.1%, up from 20.2% a year ago, while prime borrowers paid an average of 12.9% on their credit cards, and while banks that are lending them the money paid nearly 0%.

news.goldseek.com / By Jordan Roy-Byrne / 27 June 2014
The gold and silver miners have cooled off in recent days after a red-hot start to the summer. Could this cool off be the start of another move lower or a pause before another leg higher? We continue to be bullish and a new reason is the sudden strength in the monthly and even quarterly charts. For larger or developing trends, monthly charts supersede weekly charts, which supersede daily charts. With only two days left, the gold and silver miners are poised to end the month and quarter with their strength intact.
If GDXJ, (shown below) can close June above $41.34 then it will achieve its highest monthly close in 10 months. At the least, GDXJ is set to close at a four month high in monthly terms while engulfing nearly the last three months of trading. Compare that to the monthly advances in July and August of last year and January and February of this year. Those gains were weaker in comparison. Moreover, the strong gains in June are confirmed by the explosion in the volume.

Central Banks Buying Stocks – The Beginning of a Major Trend?

In case you haven’t heard already, another report has been released showing that central banks around the world are becoming new long-term buyers in the stock market.
The findings come after a comprehensive survey of $29.1 trillion worth of investments by 157 central banks, 156 public pension funds and 87 sovereign funds by the Official Monetary and Financial Institutions Forum (OMFIF).
Released a couple weeks ago, the report states:
Continue Reading at FinancialSense.com…
Please share this article
at 12:03 AM No comments: Links to this post