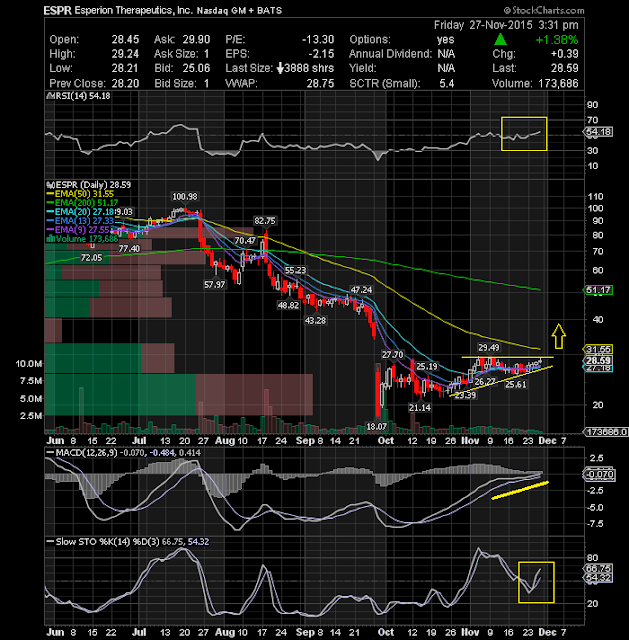 Esperion Therapeutics Inc (NASDAQ:ESPR) stock is coiling up in a tight pattern for a move higher. I have highlighted a potential ascending triangle formation which if confirmed would project a target around $35. Also take note that on the daily time-frame the MACD has been moving up and the daily slow stochastics and RSI are both rising, indicating bullishness. Another good point of interest is the high amount of shorts in the stock. Could see a short squeeze possibly to >$33 once the gap is reentered. Watching over 29.5 for a trade. ESPR will move very quickly, so keep a very close eye on the stock.
at 12:03 AM No comments: Links to this post 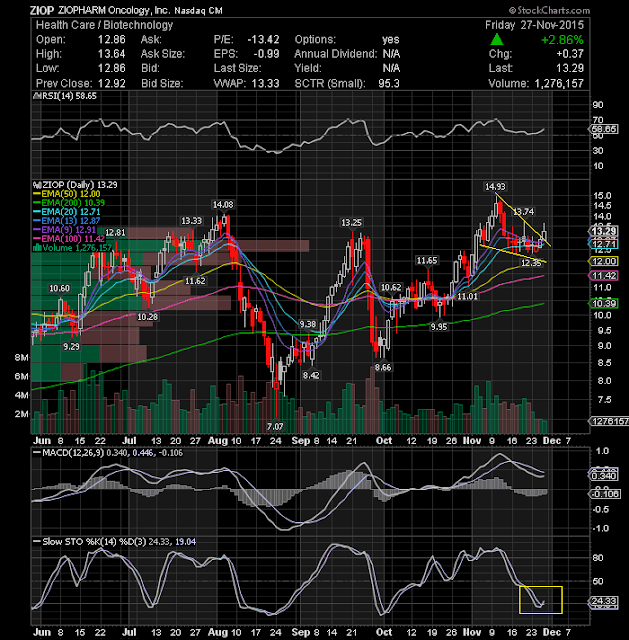 ZIOPHARM Oncology Inc. (NASDAQ:ZIOP) The stock has been one of the strongest stocks the past month as it has traded from $8.66 in Ocotber, up to $14.93 in mid-Nov. The stock has pulled back to the $12.5-13 range and seems to be setting up for another upside move. It was flat for most of the week until it broke out of a triangle formation on Friday. Immediate resistance is at 13.64 (yesterday’s high). A break above that area could trigger further upside recovery testing $14 area. Watch ZIOP on Monday.
at 12:03 AM No comments: Links to this post 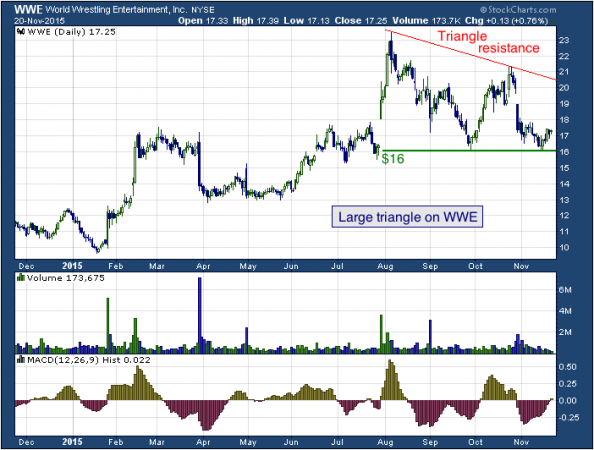 WWE has formed a support level at $16 (green) over the past three months. In addition, the stock is declining against a short-term, down trending resistance level (red). These two levels combined have WWE stuck within a common chart pattern known as a descending triangle. Eventually, the stock will have to break one of those two levels.

An Analysis Of 100 Baggers


This is an analysis of past 100-bagger stocks. A 100-bagger is a stock which increases in value 100 fold (i.e., a stock which goes from $1 to $100). The term "bagger" was popularized by Peter Lynch, the former fund manager of Fidelity Magellan. He actually spoke most often of 10- baggers, however I figured that looking at 100-baggers would be more fun. By looking back I hoped to discover some common characteristics which would aid me in identifying potential multi-baggers of the future. Of course all my analysis is grounded in the fundamentals of companies. However once I find those stocks with the fundamentals I like, it was my hope that this exercise would help me to understand better why some stocks appear to go nowhere despite solid fundamentals while others make dizzying advances, how long those moves can last, when to enter and when to exit, etc.

I will be including lots of charts so I should describe their format. I make my own charts because I want to see certain things on them not normally present on stock charts (such as earnings lines, growth rates, and PEG ratios). Below is the chart of NTRI, a 100-bagger I will go over in more detail later.

In blue is the adjusted closing share price (adjusted for stock splits). The pink through dark red step function lines are the trailing twelve month EPS times various multiples (see the legend on the right). All EPS figures have also been adjusted for any stock splits. These lines, like the closing price, are read on the left-hand scale. The green step function lines are the year over year percentage change in quarterly EPS (green dotted line) and ttm EPS (green dashed line). (more)
at 3:27 PM No comments: Links to this post