We believe that it pays to buy dividend-paying stocks. Dividends can assist you in paying your bills, of course. Even better, dividends are likely to improve your returns from your stock portfolio. This is particularly true of ‘dividend aristocrats’. In Canada, that refers to companies that have raised their dividends for at least five years in a row.

In the U.S., the term ‘dividend aristocrats’ refers to companies that have raised their dividends for at least 25 years in a row. If we applied that criterion to Canada, this country would have very few dividend aristocrats. Among our Key stocks, Fortis Inc. and Canadian Utilities would qualify.

The benefit of dividends is confirmed by many studies. Consider a study by Professor Jeremy Siegel at the Wharton School of the University of Pennsylvania. In his book Stocks for the Long Run, he writes, “The historical analysis of the S&P 500 [Standard & Poor’s 500 stocks] Index, supports the case for using dividend yields to achieve higher stock returns.
“On December 31 of each year from 1957 onward, I sorted the firms in the S&P 500 Index into five groups (or quintiles) ranked from the highest to lowest dividend yields and then calculated the total returns over the next calendar year.

Professor Siegel also notes that “The highest dividend yielders also had a beta below 1, indicating these stocks were more stable over market cycles. The lowest-dividend yielding stocks not only had the lowest return but also the highest beta [often used as a measure of risk]. The annual return of the 100 highest dividend yielders in the S&P 500 Index since the index was founded in 1957 was 3.42 percentage points per year above what would have been predicted by the efficient market model [better risk-adjusted returns], while the return of the 100 lowest dividend yielders would have had a return that was 2.58 percentage points per year lower.”

Go big or go home
Just remember that the S&P 500 includes the 500 U.S. stocks with the top ‘market caps’. (The market cap is the number of shares outstanding multiplied by the share price). These companies are generally more stable than small firms. So they’re more likely to maintain their dividends. Small firms may have no choice but to reduce or eliminate their dividends.
Provided that you’re buying big and solid companies, a higher-than-average dividend yield is a positive indicator. With small companies, by contrast, a higher-that-average dividend yield can indicate that there’s a higher risk of a dividend cut or omission.
Please share this article
at 12:05 AM No comments: Links to this post

Charles Nenner, who has claimed to have never been wrong on a market call, appeared on CNBC and warned that deflation and a stock market crash both coming.
Nenner, who developed the "Nenner cycle," which he says can time the ups and downs of any market, said on CNBC that "for the next many years, you will not see the S&P more than 5% higher than [current levels.]"
But he warns this period of low returns will be followed years of large losses.
"And there's a major thing coming down — I'm talking about far in the future — a major collapse coming down starting in 2018 to 2020," he said.
Fortunately for investors looking for a long-term buy signal, Nenner sees the next bull market starting in 2020.
Earlier in the segment, Nenner had a contentious exchange with CNBC host Scott Wapner reminiscent of the exchange CNBC anchor Jackie DeAngelis had with Bill Fleckenstein earlier this month.
Wapner challenged Nenner regarding some of his past market calls, including a call back in 2010 for a "major crisis" after 2013 due to sunspot activity, and a 2009 call that the Dow would hit 5,000 in the next "two to two-and-a-half years."
Fortunately, those calls did not come to fruition.
Currently, Nenner said he is "totally" out of the market.
Nenner sees the primary catalyst for a crash being deflation, which he believes is already starting to take hold across the world's economies and cripple growth.
"I think the big problem is in deflation, which I'm saying every year," Nenner said.
"Europe is close to deflation, Japan is still in deflation, China has very low inflation, and if the dollar continues to rise in the United States, we'll get deflation over here. And I don't think investors are ready for it."
Nenner said that there is deflation in most of the world already, and that a strong dollar will see that deflation get exported here, making it hard for indebted governments to pay off their debts.
Above is the clip from Nenner's appearance on Tuesday. Unfortunately, Nenner's more contentious exchange with Wapner was not available from CNBC. 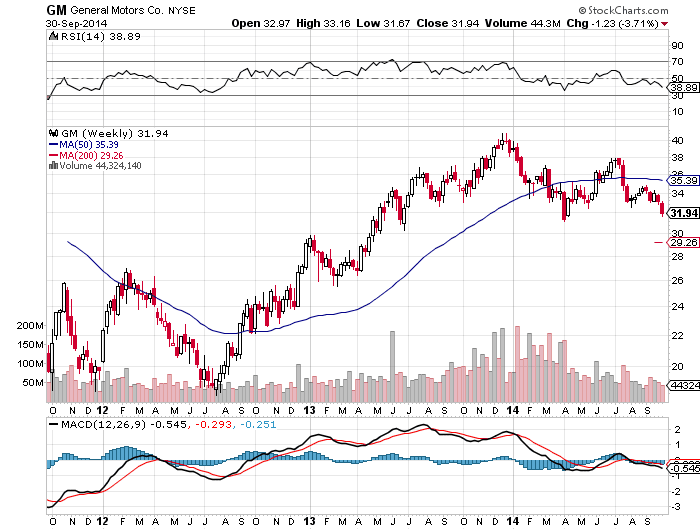 Despite the fact that the market is trading near all-time highs, there are a few stocks that are still offering impressive upside for investors.
What’s more, Wall Street is giddy about these stocks.
And no, I’m not talking about Facebook (NYSE: FB) or Twitter (Nasdaq: TWTR)…
Rather, these are sound companies that have profitable track records. They also happen to have some of the best upside potential in the market, according to Wall Street price targets. (more)

How to Trade October Volatility

by Greg Guenthner
Daily Reckoning
The craziest month of the trading year is less than 24 hours away…
October is typically viewed as an investor’s worst nightmare. After all, fall is crash season. Open your history books and you’ll find plenty of horrifying drops ranging from the 1929 crash that sparked the Great Depression (Oct. 28-29) to the infamous Black Monday crash in 1987 (Oct. 19).
Yes, October can be volatile. But it’s far from terrifying. In fact, in more recent history, October has been pretty good to investors…
“Dating back to 1950, October has only been the seventh strongest month of twelve. In recent years this has changed and moved towards a much more bullish bias,” explains technical analyst Chad Gassaway. “Since both 1990 and 2000, October has been the third strongest month and has averaged returns of 1.48% and 1.27% respectively. Moreover, win rates have averaged 66.67% and 64.29% over these time periods.”
Continue Reading at DailyReckoning.com…
Please share this article
at 12:03 AM No comments: Links to this post CE has formed a key level of support at $57.50 (blue), which was also an important resistance level prior. In addition, the stock has created a down trending resistance starting from the beginning of July (red). The stock has just recently hit the resistance and appears to be headed back down to support. At some point, CE will have to either break support or break its string of lower highs.