Apache Corporation, an independent energy company, explores, develops, and produces natural gas, crude oil, and natural gas liquids. It operates onshore and offshore assets primarily in the Permian Basin, the Anadarko basin in western Oklahoma, and the Texas Panhandle, Gulf Coast areas of the United States, as well as in Western Canada. The company also operates assets in Egypt, Australia, and offshore the United Kingdom in the North Sea. As of December 31, 2014, it had total estimated proved reserves of 1,074 million barrels of crude oil, 282 million barrels of natural gas liquids, and 6.2 trillion cubic feet of natural gas.
Take a look at the 1-year chart of Apache (NYSE: APA) with the added notations: 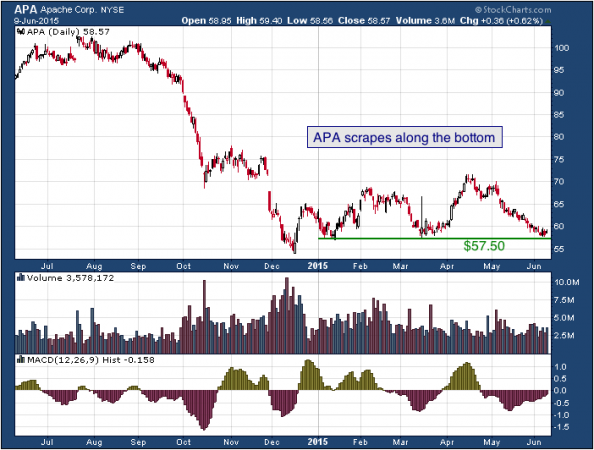 APA declined persistently back in the fall. Once the stock bottomed in December, APA ended up finding support at $57.50 (green). Now that the stock looks like it may be falling down to that support level again, traders should be able to expect some sort of bounce. However, if the $57.50 support were to break, lower prices should follow.

The Tale of the Tape: APA has a key level of support at $57.50. A trader could enter a long position at $57.50 with a stop placed under the level. If the stock were to break below the support a short position could be entered instead.
Please share this article
at 12:03 AM No comments: 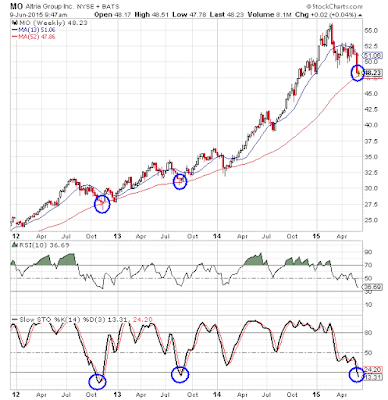 My very first job in the investment industry was as a cold caller for a broker in Dayton, Ohio back in 1989. There was one particular broker in the office that was older and pretty conservative with his investment ideas for his clients.
He didn’t put them in annuities or limited partnerships, and he used mutual funds only rarely. He had a basket of stocks that were his go-to investments, and he built his client portfolios using these dozen stocks.  (more) 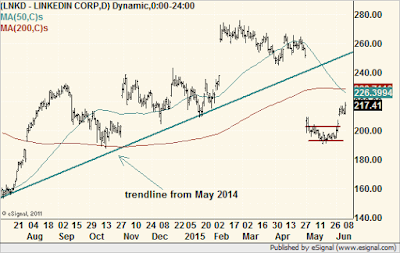 It's not often that a stock suffers technical destruction and repairs itself in just a few weeks. But that is what seems to be happening to professional social media site LinkedIn (NASDAQ: LNKD). And the way it has performed recently suggests it has plenty of gas in the tank.
On April 30, the company issued a warning that Q2 revenue and earnings would fall short of expectations. The next day the stock cratered 19% to smash through its one-year trendline and 200-day moving average on huge volume, which is often the case when a stock purges.  (more)

11 oil stocks that are forecast to rise up to 53%: Whiting Petroleum Corp.(WLL) 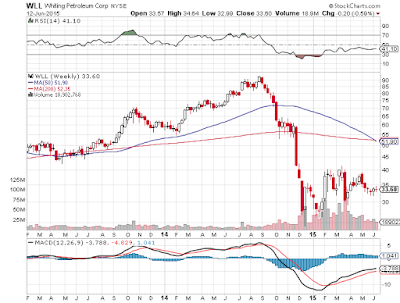 The price of oil has staged a recovery from its March low. But not all producers’ stock prices have hitched a ride higher.
Oil rose to a 2015 closing high Wednesday, helped by six straight weeks of inventory declines.
Here’s how the S&P 500 Oil and Gas Exploration Index SPSIOP, -1.40%  and the SPDR S&P Oil & Gas Exploration & Production ETF XOP, -1.33%  have fared against the price of West Texas crude oil CLN5, -1.37%  over the past six months: (more)