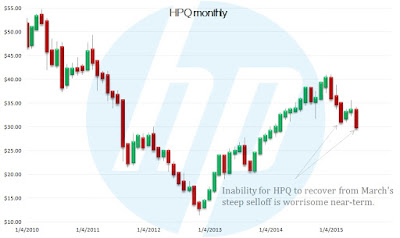 Since the advent of equity trading, investors have always tried to look for an edge in the markets, no matter how slight or seemingly spurious. It may surprise some investors to learn that the incomparable Charles Dow — whose innovative market research inspired the creation of the Dow Jones Industrial Average — originated the thesis that forms the backbone of the modern discipline of technical analysis.

The godfather of the markets would undoubtedly be amused that the entrance and particularly the exit of companies from the venerable Dow Jones index would become its own contrarian indicator.

A relatively new phenomenon labeled by some experts of the markets as the “index effect,” it proposes that the stock getting the boot from a major index — such as the Dow Jones — will eventually find greener pastures, many of them sooner rather than later. (more)

The Canadian dollar is likely to fall further in the coming months, hit by both a weak domestic economic outlook and an anticipated rise in interest rates in the United States, a Reuters poll showed.
Oil prices are also expected to remain weak for the rest of the year amid a persisting global supply glut, and is likely to continue to weigh on the commodity-linked loonie.
Still, analysts expect the currency will not fall as much as it did in March, when it hit its lowest levels since early 2009.  (more) 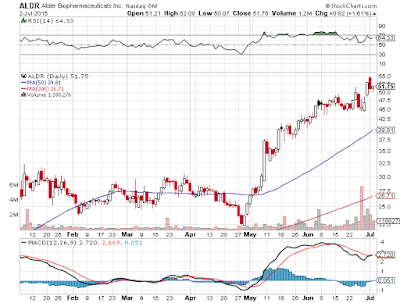 The Chart of the Day belongs to Alder Biopharmaceuticals (ALDR).  I found the bio medical stock when I used Barchart to sort the All Time High list for the stocks with the highest technical buy signals then used the Flipchart feature to review the charts,  Since the Trend Spotter signaled a buy on 5/6 the stock gained 88.16%.


The status of Barchart's Opinion trading systems are listed below.  Please note that the Barchart Opinion indicators are updated live during the session every 10 minutes and can therefore change during the day as the market fluctuates.