Today one of the top CEO’s in the world told King World News that big money and large fund managers are now positioning themselves aggressively in the gold market, and, astonishingly, just 3 sources are now buying the entire annualized world gold production. This interview is tremendous, and it will let KWN readers around the world see the gold market through the eyes of one of the greatest and well-respected veterans in the business. Below is what Sean Boyd, CEO of $5.2 billion Agnico Eagle, had to say.
Continue Reading at KingWorldNews.com…
Please share this article
at 12:07 AM No comments:

Get Positioned Now for the Coming Bond Slaughter: TBT 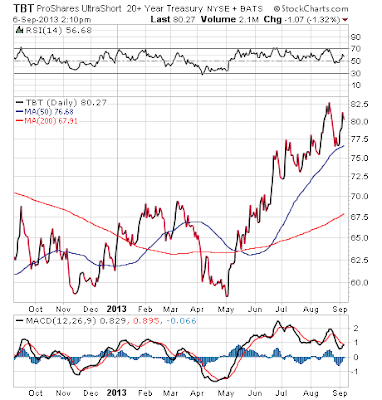 On Friday, we received what can best be described as a mediocre August jobs report that showed a gain of 169,000 nonfarm payroll jobs created during the month. The data also reflected a decline in the unemployment rate to 7.3%.

The jobs report was weaker than anticipated, and as such, brought into question what the Federal Reserve might do when it meets on Sept. 17-18 to discuss the much-anticipated "taper" of its $85-billion-per-month bond buying scheme, aka quantitative easing.

Now, one reaction to the relative weakness in the jobs report was a decline in Treasury bond yields. The yield on the benchmark 10-Year Treasury note fell to 2.94% Friday, down from Thursday's close of 2.98%, which is the highest level since July 2011.

Traders moved back into Treasury bonds with the mindset that the Fed's tapering could either be delayed, or be less aggressive than it might otherwise have been had the jobs data been stronger. (more)

Over the weekend I noticed Oil and Gas stocks popping up on my scans. This could be a sector to keep your eye on going forward with crude being bullish recently. MTDR is getting close to a decent pullback buy which would be near $14.75 or when the RSI hits 40. The other two have gone on quite a run and need some time to have an extended pullback. 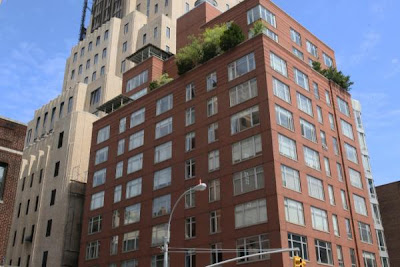 In August 2012, when isolating one of the various reasons for the latest housing bubble, we suggested that a primary catalyst for the price surge in the ultra-luxury housing segment and the seemingly endless supply of "all cash" buyers (standing at an unprecedented 60% of all buyers lately as reported by Goldman) is a very simple one: crime. Or rather, the use of US real estate as a means to launder illegal offshore-procured money. We also identified the one key permissive feature which allowed this: the National Association of Realtors' exemption from Anti-Money Laundering provisions. In other words, all a foreign oligarch - who may or may not have used chemical weapons in their past: all depends on how recently they took their picture with the Secretary of State - had to do to buy a $47 million Florida house, was to get the actual cash to the US. Well good thing there are private jets whose cargo is never checked. It appears that a year later this too hypothesis has been proven. Earlier today the Post reported that "U.S. authorities announced Tuesday that they are seeking forfeiture of pricey Manhattan real estate linked to a fraud they say was uncovered by a whistleblowing Russian lawyer before he died behind bars. A civil forfeiture complaint filed against the assets of a Cyprus-based real estate corporation and other holding companies alleges that some of the proceeds from the $230 million tax fraud in Russia were laundered through the purchase of four luxury condominiums located in a Wall Street doorman building and two commercial spaces in prime locations in midtown and Chelsea."  (more) 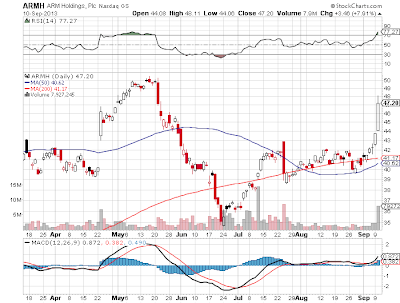 If you’ve blinked in the last 14 days, you might have missed this…

And most folks shrugged it off as just another of the thousands of below-the-radar deals that companies do every year.

But this one’s different.

ARM’s buyout of Sensinode is the latest reminder that the single-biggest profit opportunity currently on my radar screen is about to start paying off.  (more)

A potential U.S. attack against Syria and Fed retreat from asset purchases have shaken global stock markets and sent major U.S. market index down 3-5% below their early August highs. But the move hasn’t shaken James Altucher’s long-term confidence in stocks and today stocks are extending recent gains on news that tensions with Syria could be easing.

The author, blogger and managing director of Formula Capital tells The Daily Ticker the Dow is headed toward 20,000 within the next 18 to 24 months.


“The economy is growing...the stock market is at all-time highs [actually near all-time highs]," says Altucher. "There’s no reason to think that suddenly for the first time in history the market will never return. The market will keep on going up with the economy.” (more)