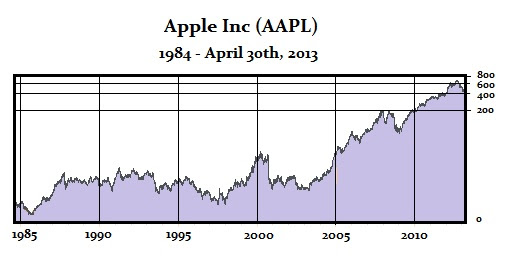 Apple sells $17 billion in bonds in record deal on Tuesday to initiate dividends and to buy-back shares because the stock has crashed. Buying stock is an investment. When companies buy back shares to placate investors, historically it is the beginning of the end. Many companies did that during the early days of the Great Depression. When the market kept going down and business was under stress, their early attempts to support their share prices resulted in the collapse of the company or its takeover. Buying back stock to delist is one thing. To do so to try to support share prices – VERY BAD!!!! In this case, Apple agreed to pay out $100 billion of its $145 billion war chest. But to do that, they have to bring back the cash from overseas and then pay huge taxes. This clever trick of issuing bonds at low rates now to satisfy shareholders is a clever move. However, shareholders should shut-up or sell. Corporations are not bank accounts. When times get tough, banks will not lend and they cannot sell new shares or borrow from the market. Shareholders are DEAD wrong on this one. If they were good traders, they should have sold their shares at the top. It was a clear bubble. They wining is like going to a casino better on red at the roulette where, and when they lose, ask for a portion to be returned. Get real – you are either a trader or an investor. You cannot be both. Traders lose when they get married to a trade. That is the number one rule of trading – NEVER NEVER NEVER NEVER NEVER marry the trade. Only fools do so.

“There Will Be Haircuts”
by William H. Gross


“Good as Money,” proclaimed the ad for Twenty Grand Cognac. Being a beer drinker, and never having cashed in a Budweiser to pay for a fill-up at the local gas station, I said to myself “Man, that must be really good stuff!” Even in a financial meltdown I thought, you could use it in place of cash, diamonds, gold or Bitcoins! And if the Mongol hordes descend upon us during a future revolution, who wouldn’t prefer a few belts of Twenty Grand on the way out, instead of some shiny rocks and a slingshot?

Well, not being inebriated at that moment I immediately shifted focus to a more serious topic.

What IS money? A medium of exchange and a store of value is a rather succinct definition, but we generally think of it as cash or perhaps checks that reflect some balance of “ready” cash at a friendly bank. Yet as technology and financial innovation have progressed over the past few decades, and as central banks have tenuously validated the liquidity and price of various forms of credit, it seems that the definition of money has been extended; not perhaps to a bottle of Twenty Grand Cognac, but at least to some other rather liquid forms of near currency such as money market funds, institutional “repo” and short-term Treasuries “guaranteed” by the Fed to trade at par over the next few years.(more) After a nasty fall in September, QCOR has slowly worked its way higher, one level at a time. From November through January the stock created a clear level of support at $25 (green). Over the last (5) months, QCOR has commonly reacted to the level of $30 (blue), both as support and resistance. It has also not been uncommon for the stock to find support or resistance at the $35 level (red). In summation, QCOR primarily reacts to the increments of $5.
The Tale of the Tape: QCOR has broken below $30. A short position could be entered at the $30 resistance with a stop placed above that level. A long play could be made on a break above $30 with an expectation of a rally up to $35.

The next domino: Australia doubles tax on retirement savings 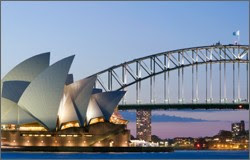 Though Australia’s national balance sheet is comparatively quite strong, the government has been running at a net deficit for years… and they’re under intense pressure to balance the budget.
The good news is that Australia now has a goodly number of investor-friendly immigration programs designed to bring productive foreigners into the country, similar to the trend we’re seeing across Europe.
On the flip side, though, the Australian government has just announced new rules which penalize citizens who have responsibly set aside savings for their own retirement.
Any income over A$100,000 drawn from a superannuation fund (the equivalent of an IRA in the United States) will now be taxed at 15%. Previously, all such income was tax-free.
Read More @ sovereignman.com

Foreign Holdings of US Securities Have Exploded

Foreigners now hold more than $13 trillion in American securities, a record set as the U.S. seeks to assert itself as the safest port in troubled global waters.

China and Japan combined owned more than $3.4 trillion, including $2.4 trillion in debt, a number that has grown since the data set was compiled.

The total value of U.S. stocks and bonds under foreign ownership rose 6.5 percent in 2012, with stocks actually rising more on a percentage basis, according to the most recent data from the U.S. Treasury.

Foreign holdings have more than doubled since 2005 and are getting close to the $15 trillion total size of the U.S. economy. (more)