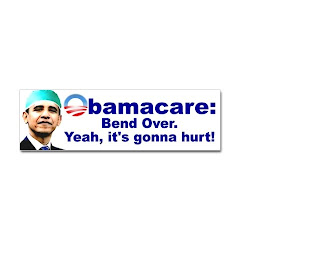 Americans are down on the economy and the markets even as stocks and growth indicators are up.

By an almost 2-to-1 margin Americans believe the economy has worsened rather than improved during the past year, according to a Bloomberg National Poll conducted March 19-22. Among those who own stocks, bonds or mutual funds, only three of 10 people say the value of their portfolio has risen since a year ago.

During that period, a bull market has driven up the benchmark Standard & Poor’s 500 Index more than 73 percent since its low on March 9, 2009. The economy grew at a 5.9 percent annual pace during last year’s fourth quarter. (more)

Maybe the oil bulls can take some comfort in the fact that oil was unable to close below $80 despite the fact that the euro hit a ten month low and the stock market actually closed lower. (It can do that you know.) Oil prices shook off a mighty crude oil inventory build according to the Department of Energy’s Energy Information Agency. The EIA reported that U.S. commercial crude oil inventories (excluding those in the Strategic Petroleum Reserve) increased by gigantic 7.3 million barrels from the previous week. The build was on the back of strong imports which averaged 9.4 million barrels per day which was up a cool 969,000 barrels from last week. Yet draw downs in products kept the oil somewhat supported. The EIA reported a fall of 2.7 million barrels in gasoline supply and a 2.4 million barrel drop in distillates. The drop was inspired in part by strong gasoline demand. The EIA says that gasoline demand rose 2.7%, or 238,000 b/d, to 9.087 million barrels a day which according to David Bird at Dow Jones was the highest weekly level since November 20. Still year over year demand was down 13,000 barrels per day for the corresponding week a year ago. Bird says that the gain in gasoline led a 504,000 barrel per day, or 2.7%, rise in total oil demand for the week, to 19.336 million barrels per duty which was a two week high.Increasing gas demand usually is a sign that things for consumers are getting a little better and we may see that optimism grow in gas demand numbers first. (more) 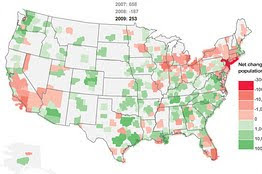 The recession has halted the dominant migration trend of recent decades, turning once-hot destinations such as Las Vegas and Orlando, Fla., into some of the country's losers.

Census data released Tuesday portray a sharp shift in migration during the depths of the recession, from July 2008 to July 2009. With home prices slammed and few jobs available in any state, people from Massachusetts to California decided to stay put or go back where they came from.

The Las Vegas metropolitan area lost about 1,300 residents to other areas. That compares with an annual inflow of 54,000 people during the height of the real-estate boom, and marks the first year of out-migration the city has seen in at least a century. The Orlando area swung to an outflow of about 4,300 from an inflow of 52,000 in 2004-2005. (more)

Thus far this week the precious metals have been under heavy pressure globally as the economic data has been very U.S Dollar friendly. All eyes are on the two day European Summit which began today as investors hope to receive a better understanding of the true economic condition and the debt crisis that exists in Europe. So far the information coming out the European Union has been as clear as mud. Greece was the first state that had its credit rating lowered followed by Portugal today and unfortunately will probably reveal several more states in need of a financial bail-out including Spain, Ireland, and Italy. Obviously with this many states needing financial assistance the pressure on the Euro has been devastating. Since a weaker Euro means a stronger Dollar and a halt to the precious metals upward momentum. It had been written in “FOCUS” a German based magazine that the vast Gold reserves in Europe would be used to help stabilize the European Union and give much needed confidence to the Euro. guess time will tell. There is now speculation that the European states in need of financial assistance may have to turn to the (IMF) International Monetary Fund for financial assistance which could promote inflation and possibly further erode the Euro. (more)

Lies, Damn Lies, and Sovereign Truths: Why the Euro is Destined to Collapse!

Well, its official (sort of). Greece, a member of the European Union, will probably join the ranks of countries like Latvia (where policies are limited by the choice of the currency regime), Iceland (where the crisis has resulted in a very heavy external debt burden), the Ukraine (which is still affected by financial and political fragility) and a bevy of third world and emerging market countries in distress from the (not very) esteemed club of IMF financial aid recipients. What does this portend for the Euro? Well, I have blogged earlier in the year that the Euro's credibility is now highly suspect and those pundits who dared contemplate the Euro potentially replacing the dollar as the global reserve currency now see the folly of their ways. The chances of a break-up are significantly higher and quite realistic. Credit Agricole's currency strategist puts it succinctly: (more)
at 3:37 AM No comments: Links to this post

"Despite early signs of recovery, the economy is still facing some significant headwinds that will limit the rate of growth we can expect for the next couple of years," Cleveland Federal Reserve Bank President Sandra Pianalto told the Bonita Springs, Fla., Chamber of Commerce.

She said two major headwinds facing the U.S. economy are prolonged unemployment and a heightened sense of caution among consumers and businesses. (more)
at 3:27 AM No comments: Links to this post

Bond investors have avoided two major Treasury Department auctions this week, prompting economists to say there is a looming sense of financial disaster in the wake of President Barack Obama’s landmark — and expensive — healthcare overhaul.

If demand for U.S. debt continues to weaken, experts say the government would be forced to pay higher interest rates to lure investors. Prospects that the $940 billion healthcare plan could add to the massive U.S. deficit would make the nation's debt less attractive to investors because of an increase in supply and less fiscal stability.

Most auctions so far in 2010 have attracted strong demand. Experts say a few lukewarm auctions don’t mean that demand will continue to evaporate. An auction Tuesday of $44 billion in two-year notes also saw demand slip from earlier in the year. (more)
at 3:25 AM No comments: Links to this post

Personal Income Drops Across the Country

Nevada's 4.8% plunge was the steepest, as construction and tourism industries took a beating. Also hit hard: Wyoming, where incomes fell 3.9%.

Incomes stayed flat in two states and rose in six and the District of Columbia. West Virginia had the best showing with a 2.1% increase. In Maine, Kentucky and Hawaii, increased government benefits, such as unemployment insurance and Social Security, offset drops in earnings and property values.

Nationally, personal income from wages, dividends, rent, retirement plans and government benefits declined 1.7% last year, unadjusted for inflation. One bright spot: As the economy recovered, personal income was up in all 50 states in the fourth quarter compared with the third. Connecticut, again, had the highest per capita income of the 50 states at $54,397 in 2009. Mississippi ranked lowest at $30,103.

Welcome back, McCotter: So this is what hope and change looks like

In the neverending saga of new disclosure of gold price manipulation, here is the most recent pearl, courtesy of Jesse's Cafe Americain:"In front of 3 witnesses, Bank of England Governor Eddie George spoke to Nicholas J. Morrell (CEO of Lonmin Plc) after the Washington Agreement gold price explosion in Sept/Oct 1999. Mr. George said "We looked into the abyss if the gold price rose further. A further rise would have taken down one or several trading houses, which might have taken down all the rest in their wake. Therefore at any price, at any cost, the central banks had to quell the gold price, manage it. It was very difficult to get the gold price under control but we have now succeeded. The US Fed was very active in getting the gold price down. So was the U.K." Makes one wonder just how much the gold price was pushed down today alone to make Gordon Brown's most recent budget reception a little more palatable. It also confirms yet again, that there is no such thing as an unmanipulated gold market. Lastly, it demands the question: on how many other occasions has the UK's massively unpopular prime minister sacrificed his people's interest merely to make criminal organizations such as AIG whole? (more)
at 3:08 AM No comments: Links to this post

The stimulus: It didn't work 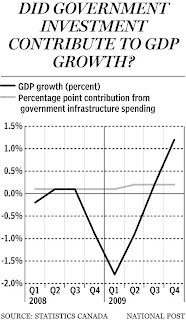 e presented a plan, a bold plan, Canada’s Economic Action Plan… That plan is working… The proof is in our performance,” boasted federal Finance Minister Jim Flaherty in his budget speech earlier this month. While Minster Flaherty’s comments are certainly great political rhetoric, the latest data from Statistics Canada tells a remarkably different story. Government stimulus had negligible effect on Canada’s economic turnaround in the second half of 2009. Put simply, the stimulus didn’t work. (more)

The bursting of the real estate bubble and the ensuing recession have hurt jobs, home prices and now Social Security.

This year, the system will pay out more in benefits than it receives in payroll taxes, an important threshold it was not expected to cross until at least 2016, according to the Congressional Budget Office.

Stephen C. Goss, chief actuary of the Social Security Administration, said that while the Congressional projection would probably be borne out, the change would have no effect on benefits in 2010 and retirees would keep receiving their checks as usual.

The problem, he said, is that payments have risen more than expected during the downturn, because jobs disappeared and people applied for benefits sooner than they had planned. At the same time, the program’s revenue has fallen sharply, because there are fewer paychecks to tax. (more)

The number of markets in a “double dip” jumped in January from five in December, data released today by Seattle-based Zillow show. The real estate information provider defines a double dip as five consecutive price drops after at least five straight monthly increases. The gains must have been preceded by a period where values fell in at least 10 of 12 months.