Cepheid, a molecular diagnostics company, develops, manufactures, and markets integrated systems for testing in the clinical market and non-clinical markets. Its systems enable molecular testing for organisms and genetic-based diseases by automating manual laboratory procedures. The company primarily offers GeneXpert system that integrates sample preparation in addition to DNA amplification and detection. The GeneXpert system is designed for reference laboratories, hospital central laboratories, and satellite testing locations, such as emergency departments and intensive care units within hospitals, as well as physician offices and other alternate site laboratories.
Take a look at the 1-year chart of Cepheid (Nasdaq: CPHD) below with the added notations: 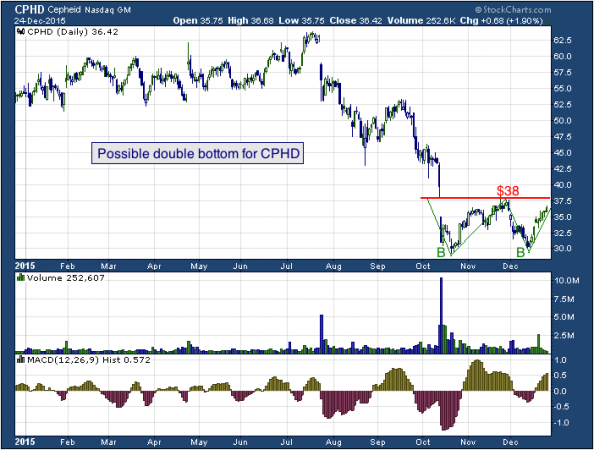 CPHD has had a rough go of it over the past 5 to 6 months. However, since the low in October, the stock appears to have formed a double bottom (green) price pattern. The pattern is as simple as it sounds: Bottoming, rallying up to a point, selling back off to a similar bottom, and then rallying back up again.
As with any price pattern, a confirmation of the pattern is needed. CPHD would confirm the pattern by breaking up through the $38 resistance (red) that has been created by the double bottom pattern.

The Tale of the Tape: CPHD may be forming a double bottom price pattern. A long trade could be entered on a break above the $38 resistance with a stop placed under that level. Traders that are bearish on the stock could short the stock at $38.
at 12:03 AM No comments: 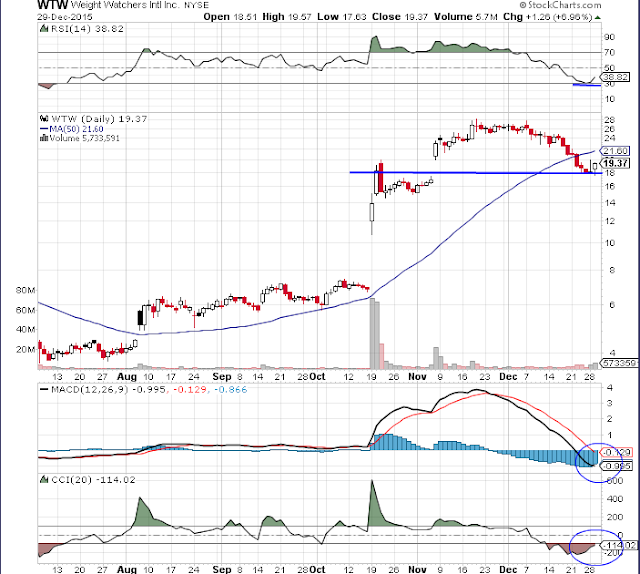 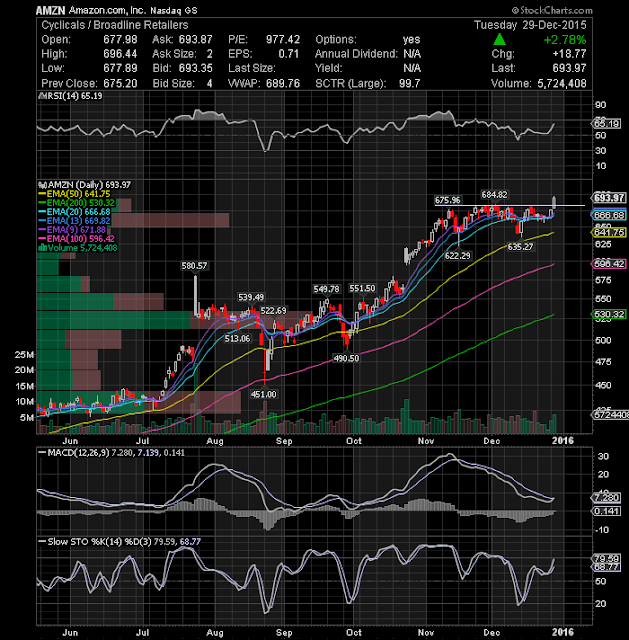 Amazon (NASDAQ:AMZN) broke out to new 52-week highs today. I'm expecting to see the stock continue this move on Wednesday. As long as the stock stays above the rising 50EMA, the bullish scenario is still intact. Daily technical chart shows bullish sign with %K line on top of %D line and MACD on top of signal line.

Michael Pento’s 2016 Predictions
The S&P 500 falls more than 20% as it finally succumbs to the incipient global recession.
Janet Yellen states in the 1st half of 2016 that the Fed will not be willing to increase the Fed Funds Rate any further and subsequently hints at another round of QE before the end of 2016.
As a consequence of this tacit admission of failure by the Fed to save the economy from the Great Recession, the US Dollar crashes below 90 on the DXY.  (more)
at 12:03 AM No comments: