Hulbert: 'Eerie Parallels' Between Current Dow Chart and That of 1929

A chart of the Dow Jones Industrial Average going back to July 2012 closely matches one from 1928-29, signaling a crash may be coming later this month or in March, if the correlation continues, says Mark Hulbert, editor of Hulbert Financial Digest.

"There are eerie parallels between the stock market’s recent behavior and how it behaved right before the 1929 crash," he writes in an article for MarketWatch.

He first wrote about the chart on MarketWatch in early December, questioning its validity. But now that the pattern has continued to repeat, he's turning into a believer.

"One of the biggest objections I heard two months ago was that the chart is a shameless exercise in after-the-fact retrofitting of the recent data to some past price pattern," Hulbert notes.

"But that objection has lost much of its force. The chart was first publicized in late November of last year, and the correlation since then certainly appears to be just as close as it was before."


"But there’s less to this objection than you might think," he notes. "You can still have a high correlation coefficient between two data series even when their gyrations are of different magnitudes.

"You may still be inclined to dismiss this. But there were many more were laughing last November when this scary chart began circulating. Not as many are laughing now."

One market expert who thinks a stock crash is coming is Marc Faber, publisher of the Gloom, Boom & Doom Report. He believes the Federal Reserve's stimulus has led to an overvalued market.

"I think the market is way overdue for a 20 to 30 percent correction," he tells CNBC. "In fact, I'm hoping for the market to drop 40 percent so stocks will again become — from a value point of view — attractive."
Please share this article
at 12:06 AM No comments:

Are Commodities Breaking Out?

Chart 1: Important news this week is the commodity index break out!

Source: Short Side of Long
To say that commodities have under-performed other major asset classes in recent times (equities, bonds and cash) would be an understatement. Both the CC Index and CRB Index peaked out in May 2011, during the optimism of the Chinese economic growth and time of huge M&A deals such as Glencore merger with Xstrata. Fast forward almost three years later and the CC Index has barley managed a 5% gain over any recent 12 month period. Furthermore, over the last 52 weeks, most individual commodities have been sold off sharply (in particular agriculture and precious metals). However, interesting development took place this week, as the technical downtrend was broken (see chart above).  (more)

Halozyme Therapeutics, Inc., a biopharmaceutical company, engages in the research, development, and commercialization of human enzymes. Its research focuses on human enzymes that transiently modify tissue under the skin to facilitate the delivery of injected drugs and fluids, or to alter abnormal tissue structures for clinical benefit. The company’s products are based on the Enhanze technology, a patented human recombinant hyaluronidase enzyme that enables the subcutaneous delivery of injectable biologics, such as monoclonal antibodies and other therapeutic molecules, as well as small molecules and fluids.
Please take a look at the 1 yr. chart of HALO (Halozyme Therapeutics, Inc) that I have shown below with my added notations: 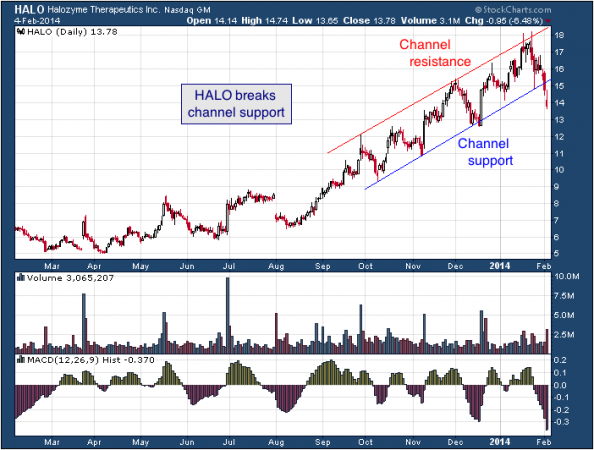 HALO had formed a nicely defined up-channel over the last (4) months. A channel is simply formed through the combination of a trend line support that runs parallel to a trend line resistance. When it comes to a channel any (3) points can start the channel, but it’s the 4th test and beyond that confirm it. You can see that HALO has multiple test points between the channel resistance (red) and the channel support (blue). Earlier this week HALO broke the channel support and should be moving lower from here.

The Tale of the Tape: HALO broke out of the bottom up its up-channel. A short trade could be entered on any rallies up to the previous channel support. That line currently sits just above $15.
Please share this article
at 12:03 AM No comments:

The age of the EPS scam is over

The era of investors’ slavish devotion to EPS is over and it's about time.
According to a report in today's Wall Street Journal, 72% of the 344 companies in the S&P 500 that have reported so far have beaten estimates. Not only that, but earnings growth of 8.1% is the highest it's been in more than two years. Despite this apparently bullish set-up stocks haven't responded, with the overall market still negative by multiple percent even with a three-day winning streak.
It's not just a few blow-ups dragging down the market. According to FactSet just over half of companies "beating expectations" have seen stock gains the next day compared to 58% over the last five years.
So what gives? The Journal has all sorts of thoughts about R&D being rewarded and other earnings quality metrics being favored. I think it's simpler than that. I think for a number of reasons the whole idea of EPS as a performance metric has always been flawed and finally at long last Investors have figured out the scam. Yes, scam.
For decades companies have been driving EPS through buybacks and undercounting dilution from outstanding options and other laughable garbage like so-called "non-GAAP" earnings. It's lunacy.
U.S. companies announced nearly $500b in buybacks last year, the highest total since 2008. This massive expenditure was billed as returning money to shareholders but that’s a triumph of marketing, not management.

Only two of the ten companies that "returned the most cash" to shareholders via buyback dollar amount for the 12 months ending in mid December of last year had outperformed the S&P 500 over the same period. Two. Including dividends an equal weighted basked of these ten stocks had a total return of 13.1% compared to a 28.6% total return for the S&P 500 over the same period. The lie at the root of EPS

The hard truth is that EPS as an entire concept is based on the false premise of stocks having a terminal value. According to Graham and Dodd’s Security Analysis, the unofficial Bible of valuing stocks, each share of a company entitles the owner to a percentage of the underlying asset. That’s fine as long as there’s a terminal event but is otherwise useless for valuation purposes.

Said in English, unless a company is going to be either sold or liquidated, your proportional share means almost nothing. Exxon (XOM) has a market cap of $390 billion. It’s not going to be purchased or dissolved. Bonds have a terminal value. Equities don’t.
Graham and Dodd wrote in 1934. Their work is a useful primer for students of investing but otherwise all but useless for modern application.
Investors need only be concerned with net income, on-going investments and future earnings potential. The only real way to return money to shareholders is through dividends. Almost everything else is just noise.
Investors win

The bottom line is the investing public is to be lauded for seeing through the lie of companies creating value by “beating estimates by a penny." In the era of GAAP vs. Non-GAAP, buybacks reducing share count and other accounting shenanigans, reported EPS is all but meaningless.
Earnings are net income. Nothing more. Returning cash to shareholders means sending out dividends. The days of EPS mattering are coming to a close. The result is better markets that are more closely linked to aligning the interests of management and shareholders.
Please share this article
at 12:03 AM No comments:

Bitcoin continues to decline at the same time complaints are being made about lost bitcoins from several companies being hacked. I PREDICTED this one week ago because of the Charts, Volume and Pricing. Maybe Bitcoin will be right back to $1200 but I wouldn't BET on it. It broke right through it's Support levels. Stocks crash overnight all the time but there are usually signs and this is one of the reasons Traders rarely hold positions overnight or going into the weekend. Some people are also saying that companies like Coin base and Mt Gox are somehow keeping their money for periods of time and rejecting their funds. Hackers are attacking systems and people are losing their Bitcoin wallets with no ability to get them back or recover them from their computers. Please share this article
at 12:02 AM No comments: