How to Make Seven Figures a Year on Social Media: James Altucher

Branden Hampton's a master of making money on social media and today James and Claudia ask him to help them understand it.

First off, James asks him what his top four social media sites are today.

They dig into what it takes to make a living off of social media.

These Oil Stocks Are Setting Up to Soar Triple Digits 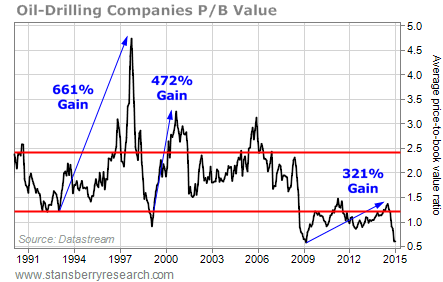 Falling oil prices are hammering all types of oil stocks right now. But one type is suffering more than the rest...
Oil-drilling companies (the companies that provide drilling equipment and service crews to oil producers) are down an average of 55% over the past six months. And they just hit a historically low valuation.
But this could soon create a great opportunity for investors to make a lot of money.
Let me explain...(more)
Please share this article
at 12:03 AM No comments:

AMC Networks Inc. owns and operates various cable television’s brands delivering content to audiences, and a platform to distributors and advertisers in the United States and internationally. The National Networks segment owns four nationally distributed entertainment programming networks comprising AMC, a television network that focuses primarily on story-telling under Something More brand name, which comprises films that are licensed from various studios; WE tv, which showcases original and programming series, and feature films; IFC, a network that creates original comedies under Always On. Slightly Off brand name and offers films from various film distributors; and Sundance Channel, which showcases original scripted and unscripted programming series. The International and Other segment operates a network of 9 channels in 16 languages across 24 countries focusing primarily on AMC in Canada, and global versions of the Sundance Channel and WE tv brands.
Take a look at the 1-year chart of AMC (Nasdaq: AMCX) below with my added notations: 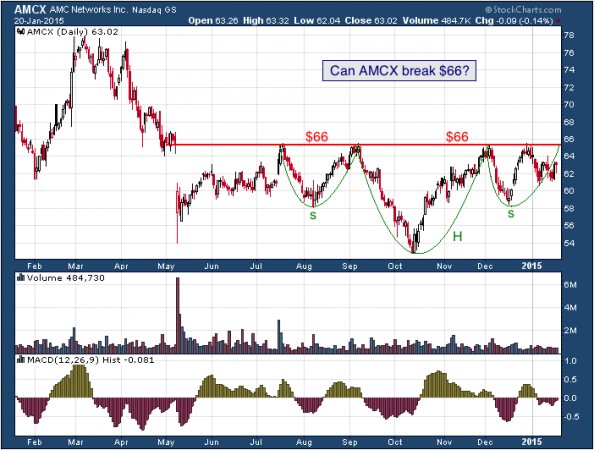 Over the last 6 months the AMCX seems to have formed an inverse head and shoulders pattern (green). I have noted the head (H) and the shoulders (s) to make the pattern more visible. The stock’s neckline resistance is just under the $66 level (red). AMCX would confirm its H&S by breaking through the neckline.
Lastly, keep in mind that simple is usually better. Had I never pointed out this inverse H&S pattern, one would still think this stock was moving higher simply if it broke through the $66 resistance level. In short, whether you noticed the pattern or not, the trade would still be the same: On the break above $66.

The Tale of the Tape: AMCX has formed an inverse head & shoulders pattern. A long trade could be entered on a break through the $66 level, preferably on an increase in volume.
Please share this article
at 12:03 AM No comments: 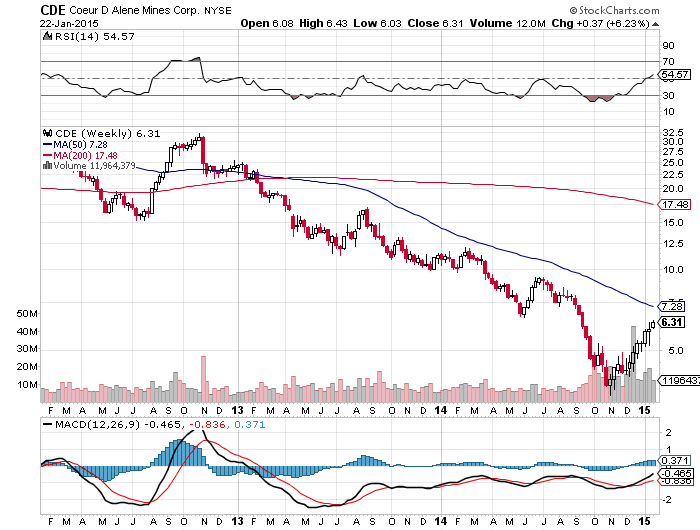 Among U.S.-based mining companies that focus primarily on producing silver, Coeur Mining, Inc. (TSX—CDE; NYSE--CDE) is the largest. It is also a growing gold producer. As with other silver and gold producers, Coeur’s financial results and shares have tumbled in recent years, along with commodity prices.

Deutsche Bank analyst Jorge Beristain says the slumping price of silver, combined with Coeur’s rising debt load, are “concerning”. With a 12-month target price of $3—significantly below the current share price—he has a “sell” recommendation.

The analyst updated his model to take into account Coeur’s third quarter results, lower guidance for 2015 spending on exploration, and the revised plan for the Palmarejo mine in Mexico, which will reduce revenue by double-digits in both 2015 and 2016.

Mr. Beristain notes too that, with “no feasible growth project in the pipeline”, he expects production to remain flat over the next four years. As well, spot silver prices are currently well below the $18.46 an ounce he expects all-in sustaining costs to average over that period. As a result, he expects Coeur to swing to negative operating cash flow.
Please share this article
at 12:03 AM No comments:

It is really no coincidence that volatility is on the rise in the markets, and that it comes slightly after the end of Quantitative Easing.
The VIX is a proxy for volatility, and its chart shows a structural rise over the last 4 months. The chart below indicates a pattern of “higher lows” towards the end of 2014. It all started with the sell off in October, when the VIX rose to a level not seen since the summer of 2012.

Without any doubt, there is a correlation between the end of the extreme QE program of the U.S Fed, the collapse of oil and other commodities (think of Dr. Copper in the first place), and the rise of volatility in the markets. (more)

Gold has been on an upward tear these last few sessions, suggesting that there is every possibility that a bull phase has begun for the monetary metal based on certain macro-economic factors. But does the current move portend a trend? Or is this just yet another one of those booby traps gold’s market puppeteers are now famous for?
Is gold going to climb into the near-$1,400 range before Jeffrey Currie proclaims “Short Gold!”, presaging an utterly reckless overnight sell-off of gold futures overnight in Tokyo? 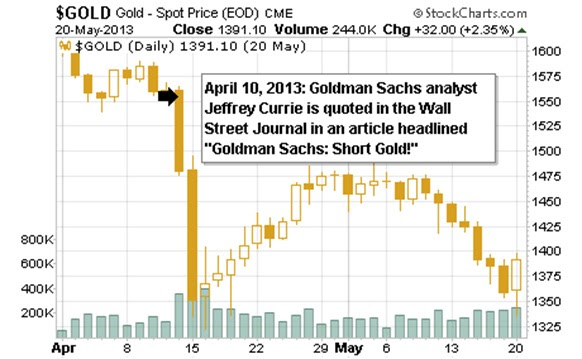 On April 10, 2013, Jeffrey Currie, lead analysts at Goldman Sachs, was quoted in the Wall Street Journal with the highly manipulative “Goldman Sachs:Short Gold!” headline. (Click to link to that story on WSJ)
Or, is gold going to resume its relentless climb akin to the 2002 to 2011 period, where each year gold notched double digit gains? Will we actually see gold at $2,000? (more)