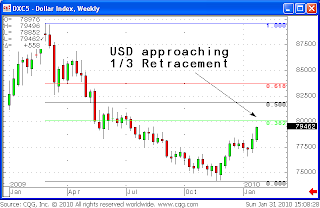 Facing a widening financial crisis, Miami leaders are already projecting a $45 million budget shortfall this year that could force the city to deplete its reserves and sell key assets to stay afloat.

``We understand the gravity of the situation,'' said Miami Mayor Tomás Regalado.

The findings harken to the bleak days of the mid 1990s, when it was discovered Miami was using bond money shuffled through various accounts to try to cover a $68 million hole. (more)

Investors are running away from bond markets in southern Europe after Germany warned there will be no bailouts for struggling debtors.

Greece, which sports a budget deficit equal to 12.7 percent of its GDP, was particularly hard hit, with its 10-year government bond yields soaring more than 40 basis points to 7.15 percent.

That sent the premium of Greek bond yields over German bond yields to the highest level since Greece joined the euro in 2002, according to the London Telegraph.

Markets in Portugal, Spain, Italy and Ireland also suffered big-time. (more)
at 3:48 AM No comments: Links to this post

Switzerland's justice minister warned in an interview on Sunday that top bank UBS could collapse if sensitive talks with the United States over a high-profile tax fraud investigation fall through.

"The actions of UBS in the United States are very problematic. Not just because they are punishable but also because they threaten all of the bank's activities," Eveline Widmer-Schlumpf told Le Matin Dimanche newspaper.

"The Swiss economy and the job market would suffer on a major scale if UBS fails as a result of its licence being revoked in the United States," she said. (more)
at 3:46 AM No comments: Links to this post

John Embry: Why gold will keep going up for years

When I was here last year gold was around $850 and there was the usual angst among mainstream commentators fearing a drop to $600 per ounce or worse. Today the price is roughly $300 higher and the same individuals continue to try to frighten the public with prophesies of vertiginous falls in the gold price. Despite this ongoing aggravation, I am even more bullish on the prospects for gold than I was a year ago.

However, despite my consistent enthusiasm for the yellow metal once termed a "barbarous relic" by Lord Keynes, I still have the strong feeling that the vast majority of investors outside this room still haven't got a clue about gold and they are certainly not aware that gold is experiencing a historic bull market with much, much further to go. What we have seen to date is merely a prelude, and the appreciation we are going to see in future years is going to greatly exceed what we have seen to date. This opinion is based on a number of factors I will expand on, but the predominant theme is that gold is re-establishing itself as money. (more)

Ever since its secular bull kicked off in 2003, the once-boring base-metals sector took on an aura of excitement. What trader wasn't excited when copper, zinc, nickel, lead, and aluminum put together respective gains of 475%, 523%, 650%, 829%, and 163% from their 2003 lows to their interim bull-market highs?

A structural shift in base metals' core fundamentals sent prices skyrocketing, as supply simply wasn't able to keep up with fast-growing demand. The age of consumption extended well beyond the Western economies that normally drove commodities prices, and an Asian monster was aggressively feeding its voracious appetite for the metals. A new group of developing economies had finally joined the modern era, initiating colossal infrastructure buildouts. (more)

Inflation and the Dollar's crash