Almost Half The Russell 2000 Members Are In A Bear Market

With market internals dismally weak and 967 of the Russell 2000 index’s members down over 20% from their highs (a bear market), the question is: how long can they maintain the status quo thanks to a handful of big blue chips as levered longs attempt to stay solvent?
READ MORE

Rosetta Resources Inc., an independent exploration and production company, engages in the acquisition, exploration, development, and production of onshore oil and gas resources in the United States. It owns producing and non-producing oil and gas properties located primarily in South Texas, including the Eagle Ford, and in the Southern Alberta Basin in Northwest Montana. As of December 31, 2011, the company had an estimated 965 billion cubic feet equivalent of proved reserves, including 36,370 million barrels of oil, 50,219 million barrels of natural gas liquids, and 446 billion cubic feet of natural gas, as well as drilled 53 net wells. Rosetta Resources Inc. was incorporated in 2005 and is headquartered in Houston, Texas.
To analyze Rosetta’s stock for potential trading opportunities, please take a look at the 1-year chart of ROSE (Rosetta Resources, Inc.) below with my added notations: 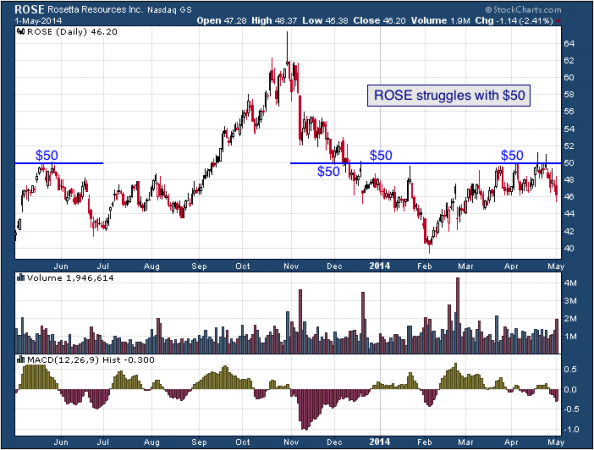 After running up nicely last fall, ROSE fell pretty hard into this year. Here recently the stock has been stalling at the key level of $50 (blue). You will notice that the $50 level has always been an issue for ROSE whenever the stock has been under it. That level was also a brief support in December.

The Tale of the Tape: ROSE has a key level of resistance at $50. A short trade could be made on any rallies up to that $50 area with a stop placed above that level. A break back above $50 would negate the forecast for a lower move.
Please share this article
at 12:04 AM No comments: Links to this post

IN THIS INTERVIEW:
- Physically deliverable gold futures contracts are coming Asian markets* ►1:10
- Manipulation: gold & silver price fluctuation limits will be implemented* ►6:30
- London gold vaults are empty, gold price spike ahead ►8:31
- Silver price will follow gold higher. At $19/oz, silver is a "bargain" ►16:55
- Federal Reserve "taper" and Friday's job numbers* are lies ►23:10
Please share this article
at 12:03 AM No comments: Links to this post

Chart of the Day - Advantage Oil and Gas (AAV) 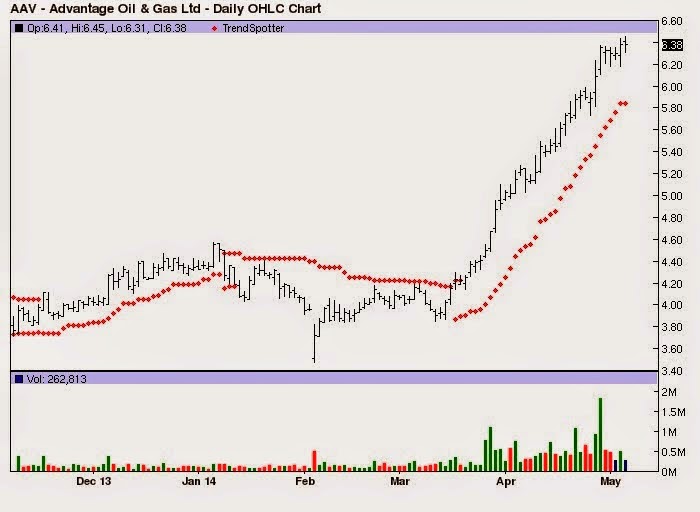 The Chart of the Day is Advantage Oil & Gas (AAV).  I found the stock by sorting the 52 week high list to see which stocks are still having momentum and this stock was right near the top of the list. Since the Trend Spotter signaled a buy on 3/18 the stock gained 50.12%.

Massive Buyback Could Trigger a 45% Gain in Assured Guaranty (NYSE: AGO) 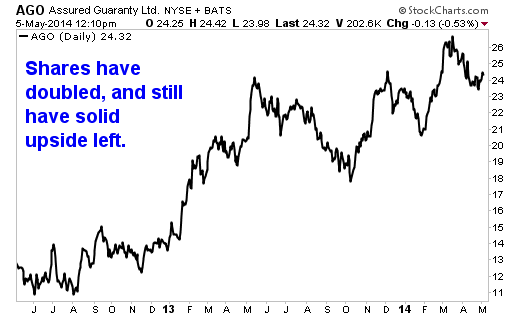 As the U.S. economy spiraled downward in 2008 and 2009, concerns arose that many state and local governments would default on their bonds. And if that happened, such a wave of municipal bankruptcies could have wiped out Assured Guaranty (NYSE: AGO), which provides insurance against such defaults.
Thankfully, we only saw a few select defaults in places such as Harrisburg, Penn., Stockton, Calif., and Jefferson County, Ala. Still, this bond insurer wasn't fully unscathed, as it has paid out $6 billion in claims since the start of the global financial crisis.
Yet, in the past 18 months, the default risk appears to have receded as most state and local governments have shored up their balance sheets. In response, investors in Assured Guaranty have been able to focus on the solid fundamentals underpinning the municipal bond insurance market.   (more)