What’s Next For Gold As Governments Become More Desperate

With gold and silver moving higher this week as stocks were trounced, today, Egon von Greyerz lets King World News readers know what to expect for the rest of this year as well as for 2013. Here is what Greyerz had this to say: “We are entering one of the most worrying times in history, maybe even for centuries or even for a millennia. I think we are going to see a turn in the world economic situation that is going to be long and extremely difficult.”
Egon von Greyerz continues:
Continue Reading at KingWorldNews.com…
at 12:06 AM No comments: Links to this post

A Head and Shoulders (H&S) pattern is a reversal pattern that forms after an uptrend. A textbook H&S pattern starts to form when a stock rallies to a point and then pulls back to a particular level (left shoulder). Next, the stock will rally again, but this time to a higher peak (head) than the previous one. After forming the head, the stock will pull back to the same support that the first shoulder did. Finally, the stock rallies a 3rd time, but not as high as the head (right shoulder). The level that has been created by all 3 of the pullbacks is simply a support level referred to as the “neckline”. The formation of an H&S pattern warns of a potential reversal of the uptrend into a possible downtrend.

Raytheon Company provides electronics, mission systems integration, and other capabilities in the areas of sensing, effects, and command, control, communications, and intelligence systems, as well as a range of mission support services in the United States and internationally. The company offers integrated defense systems that include integrated air and missile defense, radar solutions, and naval combat and ship electronic systems. It also provides missile systems, including air warfare, air and missile defense, naval weapon, land combat, advanced missiles and unmanned systems, and advanced security and directed energy systems. In addition, the company offers network centric systems that comprise integrated communications systems. Further, it provides space and airborne systems (SAS), such as intelligence, surveillance and reconnaissance systems; tactical airborne systems; space systems; and other SAS product lines. Raytheon Company provides its systems and solutions primarily to the U.S. Intelligence Community, Department of Defense agencies, the National Oceanic and Atmospheric Administration, the Department of Homeland Security, the Federal Bureau of Investigation, and the National Aeronautics and Space Administration, as well as sells to foreign military customers. The company was founded in 1922 and is based in Waltham, Massachusetts.

To review the H&S pattern that has formed on Raytheon's stock, please take a look at the 1-year chart of RTN (Raytheon Company) below with my added notations: 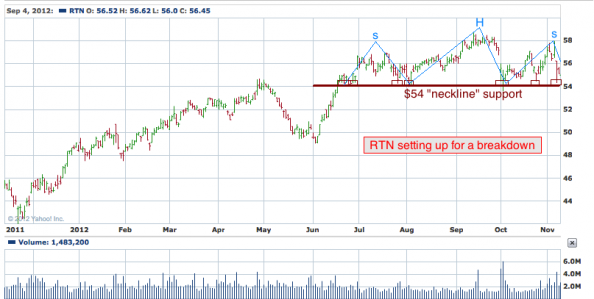 RTN has rallied nicely from its November 2011 low all the way up to its $58 peak in September. Over the last several months though, the stock looks like it is going through a topping process while having created a key price level at $54 (brown). The $54 support looks like what would be the “neckline” for an H&S pattern. Above the neckline you will notice the H&S pattern itself (lt. blue). Confirmation of the H&S would occur if RTN broke its $54 neckline support. If that happens, the stock should be moving lower from there.
at 12:05 AM No comments: Links to this post

INTEL CORP (INTC) Nasdaq – Intel (INTC) has dropped down into the unfavored zone of the SIA S&P100 Report and is showing short term weakness across all asset classes. The first support level is found at $21.64 corresponding with the upward trend line. Below that Is further support is at $20. Resistance above is found at $25.36 and $27.45. Click Here to Listen to the Audio
Continue Reading at FinancialSense.com…
at 12:04 AM No comments: Links to this post


Many traders look at indicators and try to develop trading strategies around tools like the stochastics indicator or MACD. Sometimes, it is a good idea to just see what the indicators are saying without even considering what the price looks like. This idea is shown in the chart below:

Four diverse indicators are shown, and it is difficult to make a bullish case when looking at them:


1. The stochastics is used to find market extremes, and the current signal is bearish with no sign of a buy signal in sight.
2. MACD measures the momentum of the current price trend, which is now accelerating to the downside.
3. Money flow index reformats volume data and shows whether there is more volume on up moves or down moves. The current reading indicates traders are selling with more conviction than they are buying.
4. Relative strength (RS) is used to find the leading trade candidates and many short-term traders buy only when RS is greater than 70, a long way from where the indicator sits now.
We trade price, not indicators, so in the next chart we have only the price data for SPDR Dow Jones Industrial Average (NYSE: DIA), the same ETF associated with the indicators shown above.

The price pattern for DIA shows that the next 500-point move on the Dow is more likely to be down than up. DIA came close to meeting its upside target based on the pattern that formed as prices dipped earlier this year, highlighted as (1) in the chart above. DIA then formed a small rounding top pattern and broke an upward sloping trendline as that pattern was completed, shown as (2), pointing to an initial downside target of about $125.50, highlighted as (3).

Additional downside targets indicate that the price could fall significantly below $125 with support at $120 also marking the level where a large top pattern would be completed. If DIA broke below $120, then the next price target would be $104. That would push the Dow to its first 20% decline since 2009, and a 20% drop after a four-year uptrend should not be considered unusual. The average bull market (periods between 20% dips) lasts 45 months. We are now 44 months into the current bull.

With the Dow expected to fall to at least 12,500 before moving higher, traders should maintain a short bias in the current market. Consider outright short positions or at least avoid adding new money to stocks for now.

Japan’s economy shrank an annualised 3.5 per cent between July and September, the steepest decline since the earthquake-hit first quarter of 2011, as exporters suffered big falls in shipments to key markets such as China and Europe.
Prime Minister Yoshihiko Noda described the gross domestic product figures as “severe”, while Seiji Maehara, economy minister, said Japan had possibly entered a “recessionary phase”.
Continue Reading at GlobalEconomicAnalysis.Blogspot.ca…
at 12:03 AM No comments: Links to this post