Today one of the legends in the gold world told King World News what we are looking at right now is “financial Armaggedon.” Keith Barron is responsible for one of the largest gold discoveries in history and consults with major gold companies around the world as well as international brokerage houses. Barron described the current situation as “Lehman times 1,000.” Here is how Barron described the financial nightmare: “Once their is a resolution to this situation in Greece, we will see a resurgence in the gold price. We will see some major moves. The only way to get out of this Greek mess right now is to bail it out with money. We don’t know who’s going to do it. They were talking with the Chinese today about getting them involved in a rescue fund.”

We have been discussing the position in natural gas lately and how we are looking at this as a play on a very high short interest positioning by speculators as well as the potential for greater demand moving forward. Last week, traders once again decreased long positions/increased short exposure of the commodity. This has been a reasonable trend to follow as it often signals a reversal as traders with heavy short position are rushing to cover when the price of Nat. Gas moves higher.

Also, there is a good amount of murmurs about the additional needs of Japan and Asia since their own supply and resources are not nearly enough to keep up with demand. The news of a few LNG ships ordered today could be helping to perk up the price of (UNG) and the commodity.

According to Bloomberg/CFTC: Total net positions for natural gas were short 25,250 contracts as of Feb. 7, according to the U.S. Commodity Futures Trading Commission, compared with 40,106 short contracts last year. Speculative short positions were 2,820 contracts below the previous week and 45% lower yoy, at 101,596 contracts. 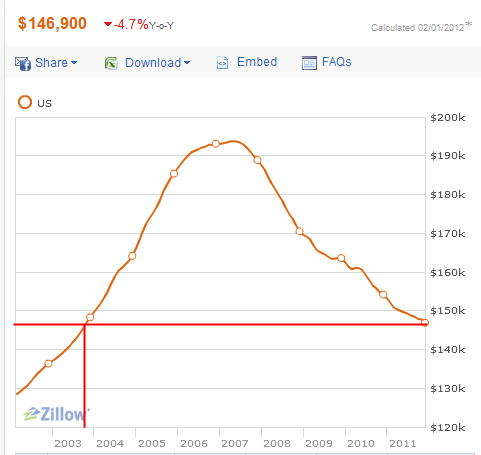 Does anyone else find it remarkable how little mainstream coverage was given (is given) to the largest financial crisis since the Great Depression? Home prices have fallen deeper in this housing induced recession versus the economic despair of the 1930s. I know most readers have realized that the tube is simply a method of entertainment and modern version of soma and should be treated as such. Let us not even examine local news in regards to educating the public on what is truly going on. The reality is that so much disinformation is being thrown out that people seem financially paralyzed. For example, most Americans still don’t realize that we are making post-bubble lows when it comes to home prices. Even entertainment that incorporates previous bubbles like the mini-series Mildred Pierce centered in depression era SoCal and focuses largely on Glendale and Pasadena, seems to bring a tinge of déjà vu. To argue effectively that home values will appreciate you have to show why household incomes will increase. There are few that make a well thought out argument combing income and home prices and showing how home values will appreciate. The more data driven arguments seem to project a stagnant housing market something akin to Japan’s lost decades or further declines. What are some of the current trends in housing and more importantly, our economy?

Today legendary trader and investor Jim Sinclair told King World News that central banks are trying to keep the price of gold from rising violently. Sinclair also believes we are entering a period where currencies will lose their ability to function as money and instead will act more like casino chips, while gold ascends. Here is what Sinclair had to say about the ongoing financial crisis: “What needs to be understood by our listeners, Eric, is when a haircut takes place, what you give with one hand, you take with another. Now the problem becomes the problem of a bank’s asset having been reduced and the bank’s ability to function reduced and the bank’s abilities to positively pass tests of liquidity have been reduced. And the psychology of the stability of a system has been reduced.”

Just thought I would pass this on. Of course it is being dismissed. Only insider buying seems to garner the attention of investors. It is just like the death cross and the golden cross discussion.

That’s a scary parallel indeed, since that late-July spike in selling came just days before one of the more painful two-week periods in the stock market in years.

In early August, as you may recall, the U.S. government lost its triple-A credit rating, and the bottom dropped out of the stock market. Between the last week of July and the second week of August, the Dow Jones Industrial Average DJIA -0.93% dropped 2,000 points.

via The insiders are selling heavily – Mark Hulbert – MarketWatch. 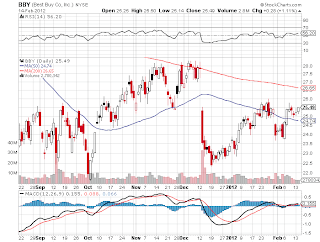 Having a low price-to-earnings ratio is no guarantee of investment success. Nevertheless, all else equal, companies trading at lower multiples to earnings tend to do well over the longer term. During such periods, however, investors should be comfortable with periods of underperformance.

Safety Margin
You won't find sizzling growth and profit numbers from these names like you will from names like Apple (Nasdaq:AAPL) and Amazon (Nasdaq:AMZN). At the same time, you won't find yourself paying P/E multiples of 14 or 139, either. Investors paying such lofty multiples are making extremely confident bets that growth rates of 30-50% can be sustained for a prolonged time. While Apple's innovative products continue to defy the most bullish expectations, as those expectations rise, even great numbers can be disappointing. Nothing is more frustrating to an investor than when a company reports profit growth of 20%, but the stock declines because analysts were expecting 30% instead.

So, with a quality stock trading at a low multiple, many of those hurdles are overcome. The key, of course, is to not get sucked in by a P/E that looks low and only gets lower. Growth is a component of value, and if a company cannot grow its business successfully, the valuation might not matter.

Part Of The Pack
Being members of the S&P 500 index adds credibility that these are no fly-by-night companies. Western Digital (NYSE:WDC) is a $9 billion business with a forward P/E of 6.2. Even better, the company has over $2.5 billion in net cash on the balance sheet. The one question mark for investors is that WDC designs and builds hard drives - products that are always in need of upgrades and innovation. Translated: WDC operates in a very competitive industry. Yet so do many other competitors that trade at greater valuations.

Eli Lilly (NYSE:LLY) may be one of the cheapest names in the S&P 500. Aside from a 10 P/E, shares currently yield 5 percent. Few, if any, companies have both an attractive valuation and an enormous payout. The company is one of the most significant drug manufacturers in the world with a bond-like yield and equity upside at a decent multiple to future earnings.

As the price of natural gas has recently declined, so have shares of Chesapeake Energy (NYSE:CHK), a $14.5 billion natural gas giant. Natural gas is an extremely abundant resource in the U.S. and has significant environmental benefits over oil and coal. Trading at around 11.5 times forward earnings, Chesapeake's natural gas assets are worth far more than today's price in a normal environment. Indeed, prolonged periods of low natural gas prices will not bode well for the stock, but value is not a short-term game.

Electronics retailing giant Best Buy (NYSE:BBY) continues to face sales headwinds at its U.S. store base. This $8.9 billion company is currently trading at 7 times forward earnings. The most recent quarterly earnings report indicated a slight sales declines but if they recover the shares are worth a closer look.

Bottom Line
There are still some quality blue chip-like names that offer decent valuations and, in some cases, excellent yields. That's a recipe for quality returns in exchange.
at 12:05 AM No comments:

Chart of the Day - Diageo (DEO)

The "Chart of the Day" is Diageo (DEO), which showed up on Monday's Barchart "All Time High" and "Gap Up" lists. Diageo on Monday gapped up to a new all-time high and closed up 1.23%. TrendSpotter has been Long since Dec 23 at $86.19. In recent news on the stock, Diageo said European sales were flat in the second half of 2011 and UK sales were down, but sales were up by 23% in Latin America, 12% in Africa, 10% in Asia, and 5% in North America. Diageo Plc, with a market cap of $58 billion, is an multinational branded food and drinks company with brands including Smirnoff, Johnnie Walker, J&B, Gordon's, Malibu, Baileys, Guinness and Tanqueray.

From the California Resource Investment Conference, Roger Wiegand joins Kitco News’ Daniela Cambone to discuss the recent “mystery trade” in which an anonymous New York entity bought 10,000 gold spreads for August on a trade, to paid out in July, followed by another “mystery trade”. Feb. 13, 2012.
at 12:04 AM No comments:

There Should Be No Love for Stocks at These Levels All indices are overbought, and chasing them is not wise

Stocks opened higher on Monday on news thatGreece’s parliament had approved the increased austerity measures demanded by the eurozone in order to secure bailout funds. And with that the markets refocused again on European headlines and rallied. Industrials and banks were strongest yesterday, which from the standpoint of technical analysis is a positive.

They say that this is likely to continue due to labor costs, energy costs and exchange rates. This trumps any news from a small matter like Greece, and for that reason, they are long-term bullish, viewing any pullback in our market due to an exit by Greece from the European Union as an outstanding buying opportunity.

They go on to say that the U.S. and European banks have already prepared for a default and that “subsequent pain will make Portugal, Italy and Spain more willing to embrace labor reform and deregulation, likeIreland.”

Well, that’s a lot to swallow, but there is no doubt that the banks have been acting better and joining the technology and industrial stocks in the current advance. There is also little doubt that if the violence inGreecebrings down the government, forcing it to exit the European Union, we could see a reaction in our markets that would present an excellent buying opportunity.

Nevertheless, at current levels the financial sector via the Financial Select Sector SPDR (NYSE:XLF[1]), like the indices, is extremely overbought. Perhaps an exit byGreece would result in better values in the financials, and so waiting rather than investing in the group is prudent policy. Currently the group has reached the significant resistance zone at $14.60 to $15.70 where progress should slow.

In Friday’s Daily Market Outlook[2], we quoted one analyst as saying, “Nasdaq is proving that an overbought market can become more overbought.”

I responded that the index’s RSI was at 80-plus. In fact, it was at 80.81 — the highest before that was 80.1 in November 2010, which marked the beginning of a decline. But yesterday’s new high in the Nasdaq is no reason to expect the same from the other indices. Currently all are overbought and chasing them at these levels is probably not wise.