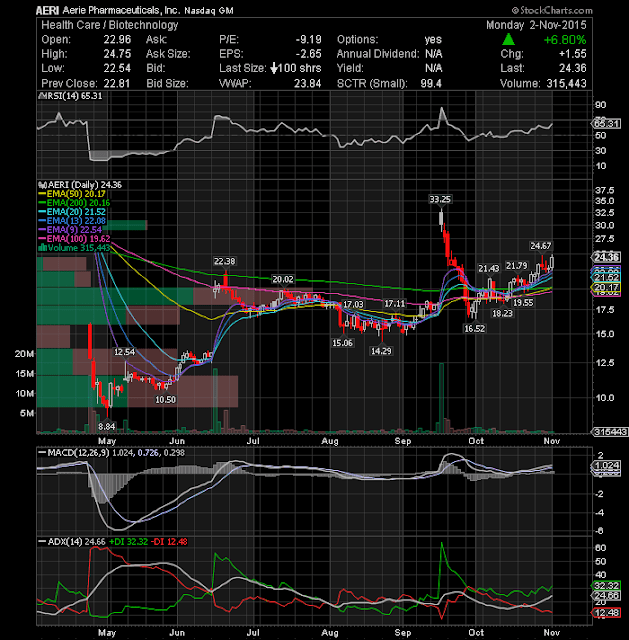 Aerie Pharmaceuticals Inc (NASDAQ:AERI) jumped 6.80% today finishing the session near the highs of the day on decent volume, suggesting buyers are stepping in. If the stock breaks today's high, the momentum could move stock to the 27.5 area. 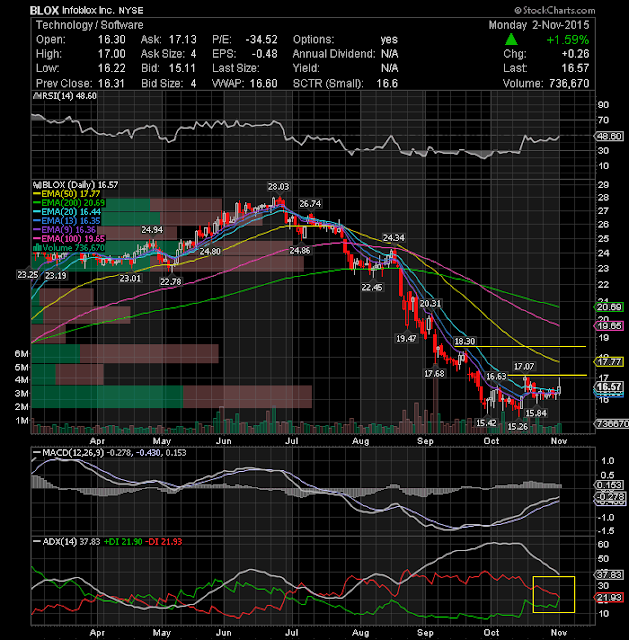 Infoblox Inc (NYSE:BLOX) started the day negative but turned things around to close up nicely on solid volume. The technical indicators are reversing up and are advocating for a technical rebound. The real fireworks should begin if the stock price can close above $17.07. As long as the stock can remain above the 15.9 level, I like the stock.
at 12:03 AM No comments: Links to this post

American Airlines Group Inc., through its subsidiaries, operates in the airline industry. As of December 31, 2014, the company operated 983 mainline jets, as well as 566 regional aircrafts through regional airline subsidiaries and third-party regional carriers. It serves 339 destinations in 54 countries. The company was formerly known as AMR Corporation and changed its name to American Airlines Group Inc. in December 2013.
Take a look at the 1-year chart of Norfolk (NASDAQ: AAL) below with my added notations: 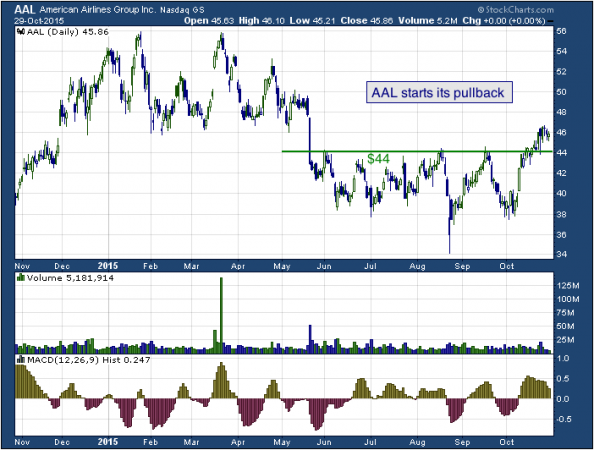 1-year chart of Norfolk (NASDAQ: AAL)
AAL went into a 5-month decline staring in March. However, during the last 3 months of the decline, and beginning of the rally, AAL created a clear level of resistance at $44 (green), which had also been support prior. A break above that $44 level should mean higher prices for the stock, and last week AAL broke that resistance.

The Tale of the Tape: AAL broke through its key level of resistance at $44. A long trade could be entered on a pull back down to that level. However, a break back below $44 could negate the forecast for a higher move and would be an opportunity to get short the stock.
at 12:03 AM No comments: Links to this post

Seadrill (SDRL) will announce its 3Q15 earnings results on November 26, 2015. Wall Street analysts estimated the company’s 3Q15 EBITDA ( earnings before interest, tax, depreciation, and amortization)  to be $502 million. Analysts have lowered their 3Q15 EBITDA estimates from the three-month prior estimate of $555 million.

Stock performance
From August 27, 2015, when Seadrill (SDRL) announced its 2Q15 results, until October 29, 2015, its stock price dropped by 14%. From October 1 to October 28, the company’s share price appreciated by 8%. The share prices for other major offshore drilling (OIH) (IYE) (XLE) companies appreciated as follows:
New contracts for several companies in October brought positive sentiments in the offshore drilling industry, leading to a jump in share prices. To read more about fleet reports in October, please refer to Offshore Drillers’ October Fleet Reports: Good News, Bad News.
Wall Street analysts’ target price
Wall Street analysts have a 12-month target price of $7.65 for Seadrill (SDRL) against the current price of $6.16 on October 27. Of these analysts, 14% recommend a buy, 30% recommend a hold, and 56% recommend a sell, according to a Bloomberg consensus.
Analyst estimates provide crucial information when looking at target prices. Last year, when Seadrill was trading at $23.80, analysts had a 12-month target price of $28.50, but the stock tumbled in the last year.
In the next few articles, we’ll analyze the analysts’ outlooks and determine whether they are optimistic or pessimistic in assessing Seadrill’s future. We’ll also analyze some key events with respect to Seadrill that took place during and after 2Q15.
at 12:03 AM No comments: Links to this post