After a 20% Fall Dollarama Inc. DOL.TO Shares Are a Bargain 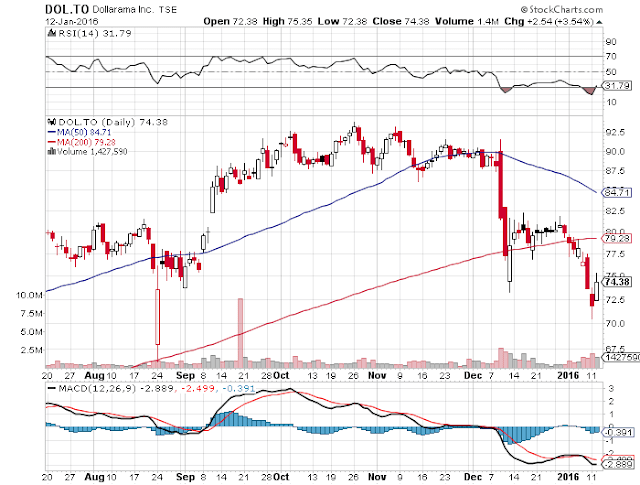 After shares of Dollarama Inc. (TSX:DOL) peaked at more than $90 each, I started to get bearish on the company.
There was still plenty to get excited about. Canada’s slowing economy is still a good thing for the company. Consumers tend to shop at lower-priced chains when times get rough, seeking the same goods at a better price. What’s priced lower than the dollar store?
Other retailers are getting hammered by the low Canadian dollar. Since Dollarama has much healthier margins than most, it’s been able to absorb some of this increase in costs. Expanding the company’s maximum price to $3 was a stroke of genius as well. Customers are willing to stomach a $0.50 increase in the price of an item, even if it is a 50% increase. In fact, most will barely notice. (more)
at 12:03 AM No comments: Links to this post

Tuesday Morning Corporation operates as a retailer of upscale decorative home accessories, housewares, seasonal goods, and gifts in the United States. The company offers various products, such as home décor, furniture, bed and bath, kitchen, toys, crafts, pets, and seasonal goods. It also provides a range of branded merchandise, including Peacock Alley, Sferra, Lenox, Waterford, and Hartmann. As of June 30, 2015, the company operated 769 discount retail stores in 41 states.
Take a look at the 1-year chart of Tuesday (NASDAQ: TUES) with the added notations: 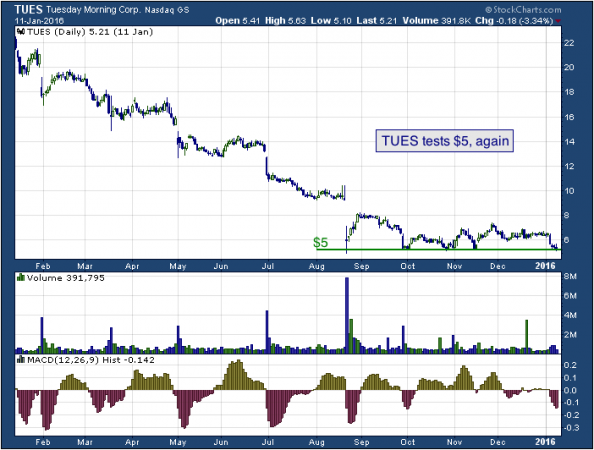 After declining steadily for most of 2015, TUES started bouncing on top of a clear $5 support (green) during the most recent 5 months. Now that the stock appears to be testing that support level again, traders should be able to expect some sort of bounce. However, if the $5 support were to break, lower prices should follow.

The Tale of the Tape: TUES has a key level of support at $5. A trader could enter a long position at $5 with a stop placed under the level. If the stock were to break below the support a short position could be entered instead.
at 12:03 AM No comments: Links to this post