The BRIC countries - Brazil, Russia, India and China - often dominate headlines, and for good reason. With over 2.8 billion people between them (more than 40% of the world's population), the room for growth in these developing economies has businesses salivating at any opportunity to put their products in the hands of new consumers brimming with cash. Investors too have been watching these emerging economies as dominant forces in the next 50 years. The recent admission of South Africa gives the group presence on three continents (Africa, Asia and South America), as well as a looming presence in Eastern Europe, thanks to Russia.

At first blush, South Africa seems like a strange addition to the group. It isn't ranked in the top 10 countries in terms of population as its fellow members are, its land area isn't as large, and its gross domestic product (GDP) is a quarter of Russia's ($1.45 trillion to $357 billion). The move may be part of a greater BRIC strategy to get on the good side of a country in a rapidly developing continent, since Brazil, Russia, India and China all have economic ties to Africa that they want to entrench. The population in the Southern Africa region, in which South Africa is considered the gateway country, represents 20% of Africa's current total population of nearly 1 billion people. Among its peers, South Africa is considered to be the most developed country, has greater political stability and is considered less corrupt (according to Transparency International).


Getting exposure into South African equities is possible through the iShares MSCI South Afica Index ETF (ARCA:EZA), which contains 50 individual holdings. However, for those looking for individual positions, you may want to check out the following South African stocks for 2012 that have been down for 2011:

Bottom Line
While South Africa's addition to the club may be considered premature by some analysts, it is clear that emerging markets will continue to play an important role in the world economy. As exporters of commodities to the rich world and importers of goods made by more developed countries, BRICS represent a giant influx of both industrial workers and cash-flush consumers.

Jim Sinclair has something to say

Jim Sinclair is not simply a gold bug; he successfully has called every major move in the precious metal — both up and down — over a generation. But he is not merely a market guru either. Sinclair has had a love affair with markets for 50 years. He has owned brokerages, clearing firms, mining companies and a precious metals dealer. His Sinclair Group of Companies, founded in 1977, offered brokerage services in stocks, bonds and commodities operating in New York, Kansas City, Toronto, Chicago, London and Geneva until he sold them in 1983. At one time he was considered the largest gold trader in the world, but today he is running his African-based Tanzanian Royalty Exploration Company and the MineSet web site that provides unique macroeconomic information to his loyal followers. Sinclair is a good person to listen to.

Futures Magazine: You have been right on gold for years. How?Jim Sinclair: Gold has been a primary focus of mine for 50 years; I’m 71, if you put enough time into a subject you probably ought to get to know it. It became obvious to me that gold had performed extraordinarily well as a currency vs. the dollar; it performed very well in the 1980s and it performed very well on the downside. It was obvious to me that a turn was coming in 2001 and we reached a high in the U.S. currency and accordingly I felt we reached a low in gold.
Read More @ FuturesMag.com
at 12:06 AM No comments:

So there are a couple of bearish patterns going on within the Nasdaq Advance Decline Volume chart. The head and shoulder top is the obvious one, but the one I want to draw your attention to is the stair stepping pattern of the RSI.
It goes from very overbought to the 50 level where it finds support. From there it attempts to get back over 70, but stalls and proceeds to roll over and visit the 40 level where it finds support. After a quick visit back to 50 it finds support and retests the 40 level. Now we are in a position where this could break down and really start to sell off. It doesn’t have to happen, but it’s in a position too…and that’s what is key here. It’s also interesting how all of this bearish RSI action corresponds with a negative MACD and a chart that is holding it’s head right above the neckline.

These Widely Overlooked Securities Yield up to 16%

Exchange-traded products (ETPs) are wildly popular. Their assets grew more than 30% a year during the past decade, compared to just 5% to 6% for mutual funds [1], according to McKinsey & Co. The management consultancy projects ETP assets will more than double over the next five years to $3.1-$4.7 trillion, from a little over $1.5 trillion today.

And while there are ETFs for everything from copper to cocoa, ETNs offer [3] a unique type of exposure to mainly two high-yield groups: master limited partnerships (MLPs) and business development companies (BDCs).

Readers of my High-Yield Investing [4] newsletter know that I'm a big fan of MLPs and BDCs. These unique businesses allow investors to capture higher yields than many blue chip stocks and bonds [5].
MLPs are in the pipeline business, transporting oil and natural gas from the drilling site to the "downstream [6]" facilities such as refineries and storage facilities. They earn a fee based on the volume [7] transported, and in turn are not as sensitive to energy prices as drilling companies, for example. This provides a reliable stream of income, much of which is passed right on to investors in the form of sizeable dividends. (more)
at 12:05 AM No comments:

The 62% of Americans who say they own their own home marks a new low since Gallup began tracking self-reported homeownership in 2001.

The current level of homeownership marks a decline from 68% in 2011. For most of the prior decade, roughly seven in 10 Americans reported owning their own home. While the recession and financial crisis took place in 2008-2009, homeownership rates didn't begin to reflect the bursting of the housing bubble until 2010, when 65% of Americans reported owning their own home -- the lowest level recorded before this year.
Record-Low 53% of Americans Say Their Home's Value Has Increased
Fifty-three percent of Americans believe their house is worth more today than when they bought it, down significantly from 80% in 2008 and 92% in 2006. It confirms that many Americans are underwater in terms of the value of the home they currently own.  (more)
at 12:04 AM No comments:

Trading Range Screen for the 30 Largest US Stocks

The S&P 500 has now bounced 3.05% from its April clos­ing low on the 10th.  The index now needs to gain 1.48% to take out its bull mar­ket clos­ing high of 1,419.04.  Below is an update of our trad­ing range screen for the 30 largest stocks in the S&P 500.  The dots indi­cate where the stock is cur­rently trad­ing, while the end of the tail shows where the stock was trad­ing one week ago.  A green dot means the stock has moved higher within its trad­ing range over the last week, while a red dot means the stock has moved lower.
For each stock, the neu­tral (N) zone rep­re­sents between one stan­dard devi­a­tion above and below its 50-day mov­ing aver­age.  The light red shad­ing rep­re­sents between one and two stan­dard devi­a­tions above the 50-day, and vice versa for the light green shad­ing.  The dark red shad­ing rep­re­sents between two and three stan­dard devi­a­tions above the 50-day, and vice versa for the dark green shad­ing.  Moves into the red shad­ing are con­sid­ered over­bought, while moves into the green shad­ing are con­sid­ered oversold.
Just 5 of the stocks shown have moved lower within their trad­ing ranges over the last week, while 25 have moved higher.  John­son & John­son (JNJ), AT&T (T) and Ver­i­zon (VZ) have had the biggest moves higher since last Thursday's close.
At the moment, 8 of the 30 largest S&P 500 stocks are in over­bought ter­ri­tory, while 4 are over­sold.  Four stocks are in extreme over­bought ter­ri­tory — AT&T (T), Pfizer (PFE), Coca-Cola (KO) and Ver­i­zon (VZ).  The 4 over­sold stocks are Wal-Mart (WMT) — which was over­bought last week, Cisco (CSCO), McDonald's (MCD) and Cono­coPhillips (COP).
Look­ing at year to date per­for­mance, the biggest stock in the S&P 500 (and in the world) — Apple (AAPL) — is up the most out of all the stocks listed with a gain of 50.54%.  Bank of Amer­ica (BAC) ranks a close sec­ond with a YTD gain of 49.19%, fol­lowed by JP Mor­gan (JPM), Cit­i­group ©, Microsoft (MSFT) and Wells Fargo (WFC).  Google (GOOG) has been the biggest loser out of the 30 biggest stocks so far this year with a decline of 4.44%.  McDonald's (MCD) — which was one of the best per­form­ing stocks in 2011 — is down the sec­ond most at –4.43%.
Inter­ested in run­ning your port­fo­lio through the Bespoke Trad­ing Range Screen?  Become a Bespoke Pre­mium Plus mem­ber today.

If you Own Shares of Apple, Then You'll Want to Read This 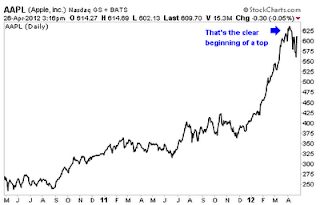 In the mid 1980s, my favorite band was R.E.M. At that time, they were the kings of college radio and snotty rock critics. But high school kids were still using Van Halen, Loverboy and Journey as their soundtrack for getting in trouble. When classmates would kid me about listening to the weird, minimalist music that they didn't play on commercial radio, however, I would simply reply, "Yeah. Just watch. There'll be an R.E.M. tape in your collection by the time you come home for Thanksgiving break of your freshman year of college."
I was at a party during Thanksgiving break of my freshman year of college. One of detractors came up and thumped me in the sternum. "You were right about R.E.M.!"
The herd had caught on.
R.E.M. went on to a major label, multimillion-dollar deal and became mainstream. I still liked R.E. M., but it had grown beyond being an outlier band from Athens, Georgia. Their output changed, perhaps dictated by a much bigger audience. (more)
at 12:03 AM No comments:

Amgen (NASDAQ:AMGN) — This independent biotech company has been a leader in the development of genetically based research and treatment for cancer, anemia, rheumatoid arthritis and a host of other major illnesses. It markets five of the world’s best-selling biotech drugs.
The Trade of the Day first recommended AMGN on Dec. 19 at $60.25 when it broke from a huge cup-and-handle formation. We recommended it again on April 3 while the stock was consolidating within a bull channel with a target of $75.
On Monday, AMGN broke from its channel, and on Wednesday, the company reported Q1 earnings of $1.59, beating analysts’ estimates of $1.43, and posted higher-than-expected revenues. Analysts raised their target to $79.
Technically the break from the bull channel is a strong indication that prices are headed higher. The MACD triggered a new buy signal, and we are raising the trading target for AMGN to $80.