Dollar Tree, Inc. operates discount variety stores in the United States and Canada. Its stores offer merchandise at the fixed price of $1.00. The company's stores provide consumable merchandise, including candy and food, and health and beauty care products; and household consumables, such as paper, plastics, household chemicals, and frozen and refrigerated food. Its stores also offer various merchandise comprising toys, durable housewares, gifts, party goods, greeting cards, softlines, and other items; and seasonal goods consisting of Easter, Halloween, and Christmas merchandise. The company operates its stores under the names of Dollar Tree, Deal$, Dollar Tree Deal$, Dollar Giant, and Dollar Bills. As of October 27, 2012, it operated 4,630 stores in 48 states and 5 Canadian Provinces. The company was founded in 1986 and is based in Chesapeake, Virginia.

To review Dollar Tree's stock, please take a look at the 1-year chart of DLTR (Dollar Tree, Inc.) below with my added notations: 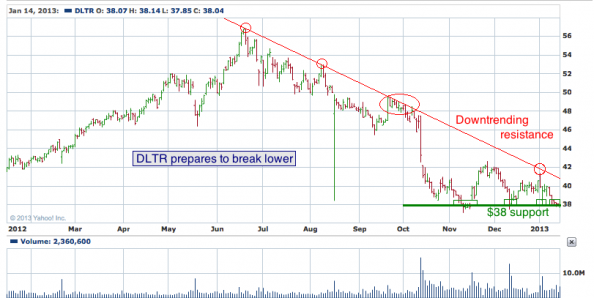 DLTR has been in a persistent downtrend since June of last year. During that time the stock has also formed an important trend line of resistance (red). Always remember, any (2) points can start a trend line, but it's the 3rd test and beyond that confirm its importance. DLTR has also created a line in the sand with its $38 support (green). 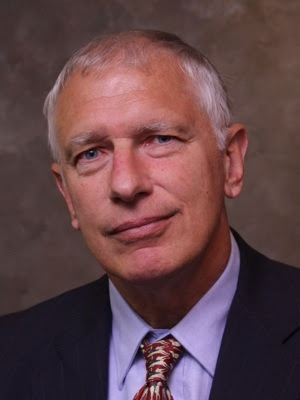 Weak hiring is restraining U.S. growth and the economy has grown at a “modest” or “moderate” pace since November. These were a few of the conditions reported in the Federal Reserve’s Beige Book Wednesday. And as The Wall Street Journal notes, it’s a story that is largely in “in line with how the economy has performed for much of the last two years” and the “latest sign that economic growth remains subdued overall.”

Yet take a look at the stock market and it tells a different story.

It is nearly impossible to talk about chart patterns on stocks without eventually discussing the very common head and shoulders (H&S) pattern. An H&S pattern is a reversal pattern that forms after an uptrend. A textbook H&S pattern starts to form when a stock rallies to a point and then pulls back to a particular level (shoulder #1). Next, the stock will rally again, but this time to a higher peak (head) than the previous shoulder. After forming the head, the stock will pull back to the same support as the first shoulder did. Finally, the stock rallies a 3rd time, but not as high as the head (shoulder #2). The level that has been created by all 3 of the pullbacks is simply a support level referred to as the “neckline”. The formation of an H&S pattern warns of a potential reversal of the uptrend into a possible downtrend.

As with any chart pattern, a trader will usually not want to act on the pattern until the stock “confirms” the pattern. Confirmation is the break of the key level that has been created by the pattern. In the case of an H&S, confirmation would be when the stock breaks the neckline (support).

What some traders do not know is that H&S patterns can also form upside-down after a downtrend as well. This pattern would be called an inverse head and shoulders. It would also be considered a reversal pattern, and the neckline would be a resistance rather than a support. To see such a pattern possibly forming, please take a look at the 1-year chart of GES (Guess, Inc.) below with my added notations: GES peaked at $37 in March and has worked its way lower since. The stock seems to be forming an inverse H&S (blue). I have noted the head (H) and the shoulders (s) to make the pattern more visible. GES's neckline resistance is at the $27 level (red). GES would confirm the pattern by breaking up through the $27 neckline and the stock should move higher from there.

Lastly, keep in mind that simple is usually better. Had I never pointed out this inverse H&S pattern, one would still think this stock is moving higher simply if it broke through the $27 resistance level. In short, whether you noticed the pattern or not, the trade would still be the same: On the break above the key $27 level.


As the stock market surged ever higher in the 1990s, many investors were content to let mutual fund managers find the right stocks for them. After all, the nation's leading mutual funds were racking up stellar gains, and it was of little concern that investors had to pay 1% to 3% in annual fees for the high-priced salaries paid out to many fund managers.

But in the next decade, parking your money in a mutual fund no longer seemed such a wise move -- many of the most popular funds failed to even keep up with their benchmarks (such as the S&P 500 or the Nasdaq Composite Index). Add to that the funds tacked on onerous management fees.

Investors have had enough, and they have been pulling out of mutual funds steadily in the past five years. In fact, with $11.6 trillion in mutual fund assets at the end of 2011, investors took more than $125 billion out of stock-focused mutual funds in 2012, according to the Investment Company Institute (ICI).

Where's that money going? Exchange-traded funds (ETFs), which trade on the major stock exchanges with their own ticker symbols.

These funds, which first appeared roughly 20 years ago, allow you to target specific investment angles such as gold, energy and even foreign countries. Yet they do so without the active hand of a high-priced fund manager. Instead, ETFs are generally "passive," which means they own a select group of stocks (or bonds) and then hold them for a very long time. That means lower trading costs and very little management overhead, which adds up to much lower annual expenses.

For example, the Fidelity Advisor Large Cap B fund charges 2.04% in annual expenses. The fund owns a range of blue chip stocks such as Apple (Nasdaq: AAPL), JP Morgan (NYSE: JPM) and Chevron (NYSE: CVX). In contrast, the SPDR S&P 500 ETF (NYSE: SPY) owns a very similar basket of stocks and charges just 0.09% in annual expenses. In effect, that Fidelity fund would have to generate annual returns of at least 2% just to deliver the same net-of-fees result as the ETF. (more)

Ignore the News. Buy These Stocks

ETFs to Watch This Earnings Season

Standard Pacific Corp. operates as a diversified builder of single-family attached and detached homes in the United States. It constructs homes targeting various homebuyers, primarily move-up buyers, in metropolitan markets in California, Florida, the Carolinas, Texas, Arizona, Colorado, and Nevada. The company also provides mortgage financing services to its homebuyers; and title examination services to its Texas homebuyers. As of December 31, 2011, it owned or controlled 26,444 home sites and had 166 active selling communities. Standard Pacific Corp. was founded in 1965 and is headquartered in Irvine, California.

To review Standard's stock, please take a look at the 1-year chart of SPF (Standard Pacific, Corp.) below with my added notations: 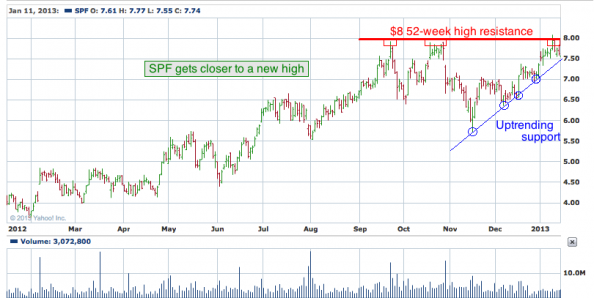 SPF has created a couple of important price levels to watch. First, SPF has formed a clear resistance at $8 (red), which would also be a 52-week high breakout if the stock could manage to break above it. In addition, the stock is climbing a short term, up-trending support level (blue) over the last (2) months. Eventually, SPF will have to either break the support or the resistance.

The Next Shoe To Drop In France

France’s economic foundations are cracking. Unemployment hit 10.5% and is incessantly rising. The private sector is becoming comatose. Car sales sank 13.9% in 2012, from a lousy 2011; sales by its native automakers plunged even more: PSA PeugeotCitroën down 16.6%, Renault Group down 19.8%. Now home sales are grinding to a halt. And the finger-pointing has already started.
In the lofty realm of apartments in Paris that are valued at €2 million or higher—€2 million doesn’t buy all that much in Paris anymore—a game of chicken is apparently transpiring. The number of transactions crashed by 42% in 2012.
Barnes, a British real estate group that specializes in high-end properties in France and certain tony locations elsewhere, based its study on data gleaned from lawyers (notaires) who engage in real estate transactions. Prices of high-end homes in Paris dropped by 10-15%. For properties under €2 million, transactions screeched lower by 28%, but prices remained stable.
Read More @ TestosteronePit.com

The "Chart of the Day" is Virgin Media (VMED), which showed up on Wednesday's  "All-Time High" list. Virgin Media on Wednesday posted a new all-time high of $38.81 and closed +2.19%. TrendSpotter has been long since Oct 1 at $29.80. In recent news on the stock, Virgin Media on Dec 14 announced a new share buyback program of at least $1.122 billion to be completed by the end of 2014. Virgin Media, with a market cap of $10 billion, provides internet, TV, mobile and fixed-line telephone services that offer entertainment and communications services in the US and UK to residential and commercial customers. 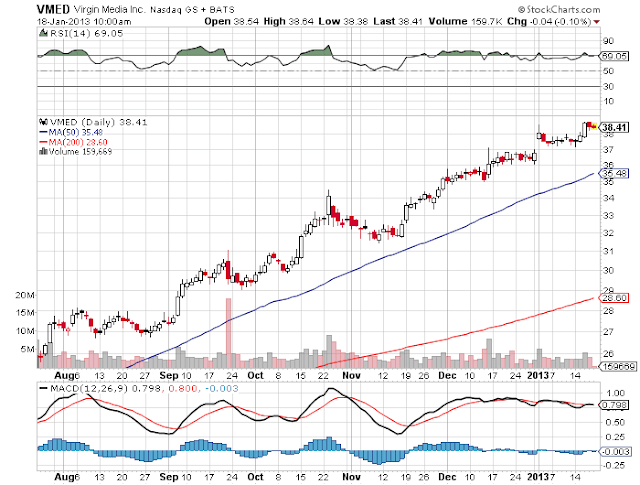