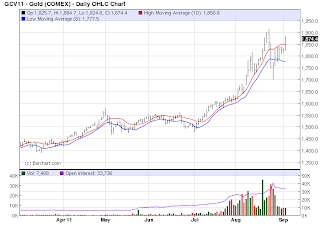 For the last week and more gold has been on a roller coaster moving between $100 and $200 each way until now where it is hovering above $1,800. A broad spectrum of analysts points either to $1,500 or above $2,000. With gold currently just above $1,800 we are around the half-way point for each move. The move each way would represent a move of just over 16%, which is not deeply significant in today's gold world except for the trading fraternity; there is more, however, beneath these moves than meets the eye!

U.S. Involvement in the Gold Market

The holders that sold gold from that ETF could be one of two types. Either a holder who took advantage of the sudden jump over $1,910 sold into strength heavily, as part of an ongoing sales program, or a broad spectrum of U.S. sellers, believing that neither inflation nor deflation is a future danger for the U.S.

Either way, buyers outside the U.S. welcomed the supply and absorbed the amount quickly. This resulted in the fall from $1,910 to $1,716 and then a race back over the $1,800 line again. The significance is that the price correction/consolidation is a movement of U.S. long-term holder's gold into central bank of Eastern demand hands.

What has been remarkable in the gold price rise is that U.S. demand for physical gold has been negligible. Compared to the original growth in the U.S. gold ETF the demand this year and last year has been modest against the initial rises in the holdings.

The behavior of the holdings has reflected not just the conservative nature of the fund but some of the investment policies of the investors. Take the holdings of George Soros. After taking his position he has decided that deflation is not a danger and has dropped his physical holdings in favor of gold shares. The switch appears reasonable in the light of the poor performance of gold shares relative to gold itself and the reality is that he did not drop his exposure to gold at all. But he remains invested in gold. The amount of buying to sell for a profit in the medium term is small and is expected to remain so. At these levels it represents less that 1% of the total investment funds in the U.S. (more)

Bob Chapman: Fearing An Even Worse Inflationary Depression Ahead

10 Lessons From People Who Lived Through The Depression

It isn't difficult to see shades of the Great Depression in the Great Recession, and in today's volatile economy. High unemployment, staggering debt, and stocks that, well, see the August 10th cover of The New York Post, who put it best.

Still, the hardship of the late 1920s and the 1930s has yet to be replicated on such a grand scale. The 25% unemployment rate was a reality back then. But corners were cut, ends were met, and the generation that lived through it still stands as a testament to getting past tough times.

Some of the men and women of the Great Depression are still around today, and perhaps it's time to turn to them for inspiration.

Here's a list of 10 ideas that were formed during that era that may help us recover, as well as remind us that, hey, it could be worse. 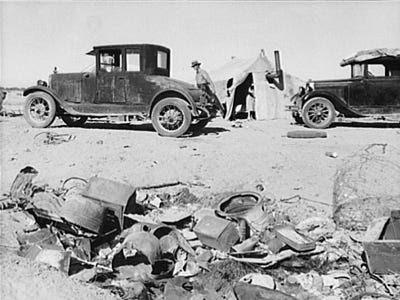 Wanda Bridgeforth was hit hardest on the home front as a child, when her parents couldn't afford to keep her with them. At one point she lived with 19 people—in a six room house. It was in these situations that she learned to conserve what she had, and reuse what she found.

Today, individuals and companies would be wise to heed this advice. We can find resources in unlikely places, whether in the the scrap heap or the ideas of the unpaid college intern. 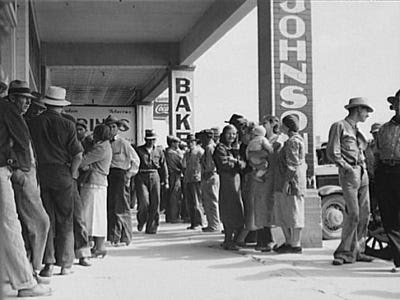 While some figures put the number of people unemployed as even higher than the numbers during the Great Depression, the widespread feeling of despair—not to mention the sheer numbers of actual starvation, poverty, and unemployment—was much higher during the 1920s and 30s than during the aughts.

1929 to 1932 saw a 50 percent drop in national income, and in 1933, almost 25 percent of the work force was unemployed. There were food shortages to go along with thousands of people filing for bankruptcy. Today's numbers, frankly, speak more to recession than depression. (more)

The Stupidest Fact In All Of Economics

It just won't die: For some reason, people keep arguing that when government debt hits 90% of a country's GDP, it causes growth to slow.

We criticized this idea a few weeks ago when we pronounced Carmen Reinhart and Ken Rogoff the most dangerous economists in the world, since it was their work on the history of sovereign debt that produced this 90% factoid.

You see, while there is some logic to the idea that when a country's economy hits the skids its government debt shoots up (as governments engage in counter-cyclical spending), people have run with this and started arguing the inverse, that that level of debt in-tern causes growth to slow.

The latest to take up the cause is CNBC's John Carney, who found a new paper from the economists Stephen G Cecchetti, M S Mohanty and Fabrizio Zampolli (.pdf) that was presented at Jackson Hole on the impact of debt on growth. The paper does hit on the same ideas as Reinhart and Rogoff regarding the connection between high debt loads and slow growth.

According to Carney: "[The paper] badly undermines the Keynesian case—made by the like of Paul Krugman—for having government spending and borrowing increase to ameliorate the downturn. It implies that more spending—at least when financed by debt—will lead to lower growth rather than higher growth."

But we went and read the paper, and actually it's very underwhelming, and not at all an indictment of pro-stimulus papers (let alone "badly undermining").

First of all, the authors specifically weren't interested in crisis/deleveraging economies. They say this outright in the paper: (more) 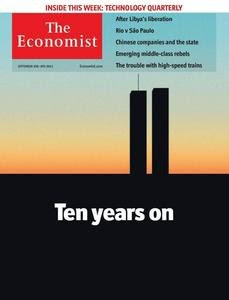 The Economist is a global weekly magazine written for those who share an uncommon interest in being well and broadly informed. Each issue explores the close links between domestic and international issues, business, politics, finance, current affairs, science, technology and the arts.

Jeremy Siegel: Stocks Are Cheap! (And Getting Cheaper)


After a 7.4% rally in the last 8 trading days of August brought the Dow back into the black for the year, the index is starting September with a thud.

Following a 120-point decline Thursday, the Dow was down more-than 200 points in recent trading Friday following a dismal jobs report, revived worries about Europe and renewed concern about banks, here and abroad.

But there's not much that worries Wharton professor and WisdomTree Investments senior advisor Jeremy Siegel.

"I like stocks very much," Siegel says in the accompanying video. "Stocks are 25% to 30% below what I'd call 'fair market value' and that might be conservative in terms of earnings power and relative interest rates."

Sticking by the theme of his investing classic Stocks for the Long Run, Siegel says stocks are cheap today based on the expected earnings power of the S&P and relative to Treasury yields, which were falling sharply again early Friday.

"Even if we have a recession, I think this is a cheap market and I don't think we're going to have one," he says. "My feeling, we're not going to have a recession so these are not unusually, tenuously, frightening earnings [projections]." (See: Recession Ahead? Nouriel Roubini Sees 60% Chance, But Jeremy Siegel Puts Odds at Just 25%)

Siegel also disputes the argument stocks are expensive based on cyclically adjusted P/Es, noting his friend and former classmate Robert Shiller's famed metric takes a 10-year average of corporate earnings. "We had a huge hole in 2009. Unprecedented," Siegel says, noting just Bank of America, Citigroup and AIG accounted for $100 billion losses. "[Shiller] averages in a zero and doesn't weight it; I think that's backward looking."

Sympathy for the Bond King

At the same time, Siegel remains extremely bearish on Treasuries and, while expressing some sympathy for Pimco's Bill Gross, says the so-called Bond King should be doubling down on his bearish bet, not abandoning it. "I think what Bill should say is 'I may have been wrong before but this is the time. Now, this is the time to get out of Treasuries,'" Siegel says. (See: Bill Gross Learns a Hard Lesson: Even the 'Bond King' Makes Mistakes)

As you'll see in the accompanying video, the professor struggles to think of what would cause him to rethink his bullish stance, short of a "major international event" or sudden surge in oil prices.

"There's always some event you could think that could wallop the stock market," he says. "But you have to ask yourself: 'Is that something in our likely event scenario?'"

For Siegel, the answer is "no," as is almost always the case.

It's now above 23% with the August update. Details from John William's Shadow Stats.

With gold surging $35 and silver trading up over $1, today King World News interviewed one of the greats in the gold world, Keith Barron. Keith consults with major gold companies around the world as well as major brokerage houses and Keith is responsible for one of the largest gold discoveries in history. When asked where he sees gold headed Barron responded, “We’re seeing things right now on the political stage that we have never, ever seen before and I believe this is tremendously bullish for gold and for silver. I would say gold is going to blow through $2,300 to $2,500 by the middle of next year.”

When asked if the mania in gold this time around will mirror that of late 1979, early 1980 Barron responded, “Absolutely and there are more players, there is just not enough gold to go around right now. You never saw the participation of the Asian and Indian markets back in 1980, we’re seeing that now. (more)


Alasdair Macleod, of financeandeconomics.org, and James Turk, Director of the GoldMoney Foundation, talk about about the importance of savings and how currency debasement destroys savings and the middle class, killing growth.

They talk about the sovereign, the gold standard and price stability. How long term growth is compatible with a stable money supply and even with prolonged deflation.

They explain how central bank interest rate manipulation through credit creation creates the business cycle and misdirect investment. Alasdair explains how in British history, absent the central bank, continuous growth and sound money helped create the most prosperous nation in the world. James explains the importance of the Rule of Law for stability and prosperity. 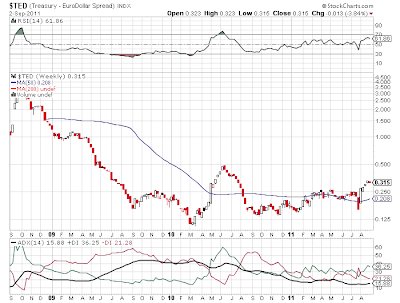