A few months after moving into the White House, President Obama promised to reduce the large deficit in 2010 and continue reducing it further in 2011. This promise was broken, and the deficit in 2010 is expected to be approximately $200 billion more than in 2009. This creates political danger for Democrats, as the party in power is reluctant to acknowledge its stewardship of worsening budget problems with midterm elections coming in November. As a result, congressional Democrats are shying away from a vote on this year's budget resolution, causing chaos to the federal budgeting process.

Avoiding a budget resolution would be unprecedented. Since the Budget Act was passed in 1974, the resolutions have served as a blueprint for Congress to identify priorities and set parameters on budget proposals, which help ensure that spending doesn't go even further out of control. In the absence of a resolution, congressional committees operate without any stipulated limits, which encourages freewheeling spending. (more)

We have disclosed on numerous occasions how excess refunds by the Federal Government despite subpar withholdings is goosing up consumer spending. Now we hear from none other than Mark Zandi of Moody's Economy that the government's tacit encouragement for "homeowners" to not pay their mortgage dues is freeing up $8 billion each month that is artificially increasing consumer spending and iPad preorders. And with banks not marking anything to market, all these houses that generate no cash flow are still marked at 100 cents on the books. If you ever needed a justification to not pay your credit card, your mortgage, or anyone else you owe money, now you know - contract law in America no longer exists. Just stop paying everything. And please dont save. Saving is for non-banana republics. Remember - the market is never wrong. And nobody can remember when was the last time we had a downday. So all must be well. (more)
at 3:58 AM No comments: Links to this post

The One Market The Fed Doesn't Want You To Know About

As we celebrate year three of the Great Financial Crisis with the first official bailout of an entire country (Greece), I'm still astounded and the complete and utter lack of coverage the underlying cause of this Crisis has received.

We've had tens of thousands, if not hundreds of thousands of articles and research reports have been written about the Crisis, and yet I would wager less than 1% of them actually bother talking about what caused it, let alone how the various efforts to stop it have in fact FAILED to address the key issues. 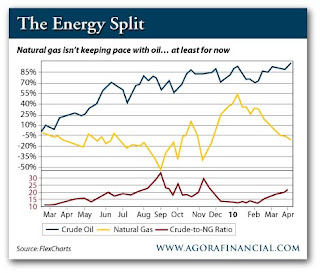 “While there’s been a recent flurry of talk on reviving nuclear energy and new offshore drilling for oil,” writes our income-investing specialist Jim Nelson, “natural gas has been left in the dust -- as far as speculation goes.”

Jim cites figures that show total recoverable natural gas resources in the United States amounted to a 60-year supply in 1990. By 2006, that grew to an 80-year supply. And the key word behind that change is “recoverable.”

“Recoverable,” says Jim, “just means that we can access it right now, with today’s technology. In 1990, the resource finders of the day couldn’t look deep in mountains quite like we can today with 4-D seismology. They also didn’t have horizontal drilling, which makes up a great deal of recent U.S. natural gas production.

“All of these technologies have kept natural gas prices down lower than oil, which didn’t benefit from new technology to quite the same extent. But because of some very obvious facts in this country, like high energy importation, rising oil prices and an ever-growing consumption base, natural gas will have its day. And anyone invested early enough stands to benefit from this inevitable natural gas hike.

“The nearby chart shows crude oil has been climbing nonstop since the market crash in 2008. Natural gas, on the other hand, has meandered along, with a nice, but too short rally late last year.

“The bottom section of that chart shows the crude oil-to-natural gas ratio during the same period. While that might not seem like much of a concern, it is.

“Historically, that ratio sits between 6- and 8-to-1. Today, that’s at around 22-to-1. That means it takes about three times as much natural gas to buy a barrel of crude oil now than it did in most of recent history. That’s a very positive sign that natural gas is cheap compared with crude.”

Faber: Stocks Headed for a 20 Percent Plunge by Year's End

Stocks will plunge by year's end and the euro is seriously oversold, says economist Marc Faber, publisher of the Gloom, Boom and Doom report.

“If (equities) make a new high, I wouldn’t rule out a correction of at least about 20 percent,” Faber says.

“Don’t forget, many shares in America and globally have already corrected 20 percent, so for them to make a new high isn’t going to be all that easy in the first place,” he recently told Bloomberg.

In general, however, Faber says “it’s better to be in stocks than bonds over the next few years because we will get more inflation in due course.”

Faber describes the euro's high against the U.S. dollar last fall as a false breakout. “I think it can rebound to $1.40 before it goes lower,” he says. (more)
at 3:25 AM No comments: Links to this post

Marxist Wealth Distribution for the Bankers 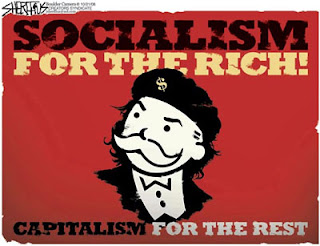 Bob Ostertag, writing for the Huffington Post, is ecstatic. He takes comfort in a poll conducted by The New York Times and CBS supposedly revealing that Tea Party supporters are college educated upper income white men over the age of 45.

“We can stop talking about the President’s birth certificate, a United Nations takeover of the United States, changes in the design of coins, and all that other nonsense,” writes Ostertag. “What we are really dealing with is remarkably straightforward: a sizable group of wealthy white men who think that the government should help them and no one else.”

Mr. Ostertag then moves on to discount the movement and advance the same old liberal corrective — a Marxist redistribution of wealth scheme that steals from the rich and showers goodies on the poor down-trodden is the answer to our problems. (more)

‘Wall of Debt’ of $2 Trillion a Struggle to Refinance

Companies in the U.S. will struggle to refinance a $2 trillion “wall of debt” maturing over the next five years as banks grapple with lending restrictions of their own, according to Standard & Poor’s.

“Most of this debt was issued during the period of 2004 to 2007 when the bank and high-yield bond markets were very robust,” John Bilardello, S&P’s global head of corporate sector ratings, said on a teleconference call from New York. “There’s a serious question over whether the securitization market will come back and whether banks will be able to lend to the extent they did several years ago.”

U.S. banks, still reeling from $1.15 trillion of writedowns and losses, are being forced to shrink their balance sheets and increase the capital they must set aside to offset the risk of losses in an attempt to avoid a repeat of the global financial crisis. The Basel Committee on Banking Supervision proposed changes in December that would require lenders to increase the amount of equity and retained earnings they hold by 2012. (more) 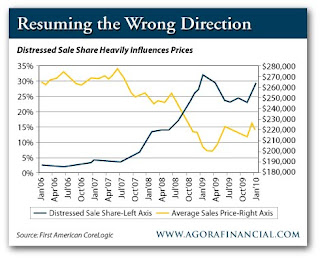 But that’s only the beginning. Well over one-quarter of all home sales in January were “distressed sales” -- foreclosures, short sales, etc. The exact figure, as calculated by First American CoreLogic, is 29% -- a monthly high last reached in January 2009.

Note the correlation between distressed sales and home prices. Both figures have once again started going in the wrong direction for the National Association of Realtors.

It’s too soon to say this is a discernable trend. But whatever happy medium the housing market found with government assistance last summer appears to be in jeopardy once again.
at 3:13 AM No comments: Links to this post

Going for broke in L.A.?

Former mayor Richard Riordan has been roiling the civic waters by arguing that the surest -- and perhaps the only -- way out of Los Angeles' fiscal crisis is a declaration of municipal bankruptcy, which he believes ought to come sooner rather than later.

In a conversation with The Times over the weekend, Riordan argued that bankruptcy may be the only way to attack the structural problem gnawing the heart out of the city budget: unsustainable public employee pension costs. Currently, Riordan says, the city is struggling to meet its pension obligations, and that's assuming it will receive 8% annually on the money invested on retirees' behalf. In fact, the average return over the past decade has been just 4%. Over the next few years, L.A. may be looking at $1.5 billion in pension obligations it can't meet. "We need some adults to come alive in the city and to talk through how to meet that liability," he said. "If that doesn't happen, we shouldn't rule out bankruptcy." (more)
at 3:12 AM No comments: Links to this post 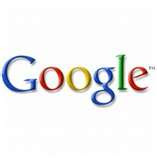 Google Inc., owner of the world’s most popular search engine, reported profit that fell short of some analysts’ estimates, a sign that online advertising may not be rebounding as fast as some had anticipated.

Google shares climbed this week as investors banked on a resurgence in Internet ad spending. Intel Corp., a barometer for the technology industry, reinforced optimism by forecasting a surge in sales and record profit margins. Google’s first-quarter performance didn’t meet expectations, said Clay Moran, an analyst at Benchmark Co. in Boca Raton, Florida. (more)
at 3:06 AM No comments: Links to this post 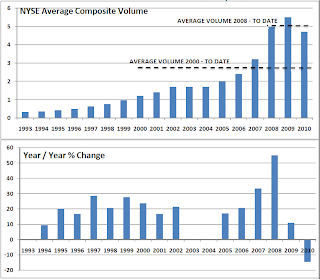