It Is Now Mathematically Impossible To Pay Off The U.S. National Debt 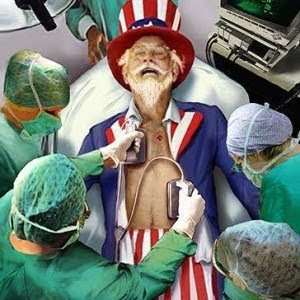 A lot of people are very upset about the rapidly increasing U.S. national debt these days and they are demanding a solution. What they don't realize is that there simply is not a solution under the current U.S. financial system. It is now mathematically impossible for the U.S. government to pay off the U.S. national debt. You see, the truth is that the U.S. government now owes more dollars than actually exist. If the U.S. government went out today and took every single penny from every single American bank, business and taxpayer, they still would not be able to pay off the national debt. And if they did that, obviously American society would stop functioning because nobody would have any money to buy or sell anything. (more)
at 3:56 AM No comments: Links to this post

Next in line for a bailout: Social Security

Don't look now. But even as the bank bailout is winding down, another huge bailout is starting, this time for the Social Security system.

A report from the Congressional Budget Office shows that for the first time in 25 years, Social Security is taking in less in taxes than it is spending on benefits.

Instead of helping to finance the rest of the government, as it has done for decades, our nation's biggest social program needs help from the Treasury to keep benefit checks from bouncing -- in other words, a taxpayer bailout.

No one has officially announced that Social Security will be cash-negative this year. But you can figure it out for yourself, as I did, by comparing two numbers in the recent federal budget update that the nonpartisan CBO issued last week. (more)
at 3:25 AM No comments: Links to this post

Mortgage rates in the U.S. rose for the first time in five weeks, threatening to slow the housing market’s recovery as government incentives near expiration.

The rate for 30-year fixed U.S. home loans rose to 5.01 percent for the week ended today from 4.98 percent, mortgage finance company Freddie Mac said in a statement. The average 15- year rate was 4.40 percent, according to the McLean, Virginia- based company.

Rising rates make it more expensive for consumers to buy homes. Sales of existing homes climbed 5 percent in 2009 after falling for three years. Demand rose as buyers took advantage of an $8,000 government tax incentive and low mortgage rates. (more)
at 3:21 AM No comments: Links to this post

Taleb: Shorting Treasuries Is A No Brainer

Financial guru Nassim Taleb says everyone on earth should short Treasuries, thanks to the exploding U.S. budget deficit and potential inflation.

He said at a conference that investors should keep a majority of their portfolio risk free and apply maximum risk to the rest.

As for Treasuries, “It’s a no brainer, every single human should short U.S. Treasury bonds,” said the hedge fund adviser and financial author.

“So long as you see the picture of Larry Summers going to Davos, you have to stay short U.S. Treasuries for another year. It means they (the Obama administration) don’t know what’s going on,” Taleb said. (more)
at 3:10 AM No comments: Links to this post

TrimTabs CEO Biderman: I Think The Government Is Buying Up The Stock Market, Though I Have No Evidence

TrimTabs CEO Charles Biderman is always interesting and outspoken, and in recent months he's been pushing the idea that the government is directly interfering in the stock market to push prices higher.

Yesterday CNBC caught up with Biderman on the floor of the exchange, and he brought up the topic again, noting that retail wasn't buying, and that companies weren't buying each other. So that, we suppose, leaves the government, though right in the very beginning he says he has "no evidence" for this, and he insists he's not a conspiracy theorist. (more)

What have I been saying ever sine the recession began, the Bureau of Labor Statistics use of the "birth/death" model is flawed. To adjust the monthly jobs data by a number which is computed from a ‘model' of how many businesses were created and how many closed up during any given month is simply asking for trouble in maintaining any sense of accuracy.

The main purpose of the birth/death model is an attempt to offset the jobs data by what the BLS believes to be happening in the real world, the only problem is that the model relies on assumptions. And assumptions are worthless in an economic

Australian and Japanese stocks plunged, following the MSCI World Index’s biggest decline in nine months, and commodities slid after an unexpected increase in U.S. jobless claims. The dollar rose to an eight-month high against the euro.