Can Anyone See the Future?

Are Your U.S. Treasury Bonds Safe?

President Barack Obama has recently unveiled bold new plans for government programs and tax breaks to try to boost the economy. These initiatives have no price tag yet, but they will require significant spending.

You can debate whether new highway and bridge projects and sundry tax breaks will help the economy. That's a political question. But as the U.S. government piles borrowing atop more borrowing, it begs a financial question that is not utterly ridiculous: Are your U.S. Treasury bonds safe?

On its face, the probability of the U.S. defaulting on its spiraling debts seems highly unlikely. But that's not what the markets think. The price of insurance against such a default—using derivatives known as credit default swaps—has jumped by more than 50% in the private market in recent months. According to CMA DataVision in London, a specialist in these contracts, it will now cost you 0.34% of the principal per year to buy default insurance on U.S. government bonds. If you held $1 million in Treasurys, insuring against default would cost you $3,400 for the year. A few months back, insuring those bonds would've cost less than $2,000. (more)

It was fitting that Richard Duncan sequestered himself in Bangkok to write his latest book "The Corruption of Capitalism," a postmortem of the credit bubble that crippled the world's financial system.

Duncan learned first hand from working in Thailand for most of the 1990s in the runup to the Asian financial crisis that rapid credit growth causes excess capacity and leads to busts. Then governments have to finance rescue plans — very similar to what is now taking place around the world.

After predicting in his 2003 book "The Dollar Crisis" that the U.S. property bubble would trigger a global recession, Duncan's new book argues that governments will have to keep stimulating their economies because U.S. demand for cheap goods will not return to the halcyon days of the 2003 to 2007 boom. (more)
at 3:54 AM No comments:

Fewer Canadians are putting money into retirement plans, according to the Royal Bank's annual RRSP poll.

Canada's largest bank said Wednesday that 32 per cent of Canadians have not started saving for retirement yet, compared to 24 per cent in 2008.

The study also found only 36 per cent say they are planning or have planned for retirement, down from 42 per cent in 2008.

The study does not say what the reasons are for the decline in RRSP investment intentions. But economists have noted that one reason may be the recession, which has pushed up the jobless rate and squeezed Canadian living standards, leaving less money for investing. (more)

A year ago, Wall Street traders and hedge funders were keeping a lid on spending as the recession...

A year ago, Wall Street traders and hedge funders were keeping a lid on spending as the recession and a tanking stock market dampened bonus season. But with the stock market up a whopping 50 percent or more so far this year and Wall Street financial firms again reporting big profits, lavish spending by Wall Streeters is already making a comeback. New York cigar shops, Lamborghini and Ferrari dealerships, steak houses and five-star restaurants have already seen an uptick in spending. And with the holiday season fasting approaching, they?re happily bracing for a spending surge.

But with the stock market up sharply and financial firms from Goldman Sachs to Bank of America once again reporting soaring profits, big bonuses are expected to return to Wall Street.

Not all financial firms will be doling out big bonuses, of course. Just last week the Obama administration's pay czar, Ken Feinberg, released new rulings that will curb pay packages for some of the highest-paid employees at companies receiving what the administration deems "exceptional assistance" from the government, including AIG, Citigroup, General Motors and GMAC.

President Barack Obama lashed out at Wall Street on Sunday, calling bankers "fat cats" who "don't get it." (more)

Growing Up Empty: The Hunger Epidemic in America

Most Americans may find it hard to accept that millions in this nation are suffering from hunger -- an affliction most often associated with war-torn Africa or flood-ravaged Bengal. It flies in the face of everything we've been told about our nation's prosperity. First the Clinton and then the Bush administration have led us to believe that poverty is under control, pointing to the mass exodus from the welfare rolls since the 1996 reforms were launched. The $27 billion cut in food stamps? Justified, lawmakers told us, because the poor are working and feeding themselves. Hunger, it is commonly understood, has long since vanished, along with the 7 million people who no longer receive public assistance. (more)
at 3:47 AM No comments:

A senior member of the Treasury Select Committee today demanded to know why the Chancellor had refused to publish estimates of the cost of interest on Britain’s national debt.

Michael Fallon, the most senior Tory on the panel, asked Alistair Darling why he had not admitted that annual interest on the debt is forecast to hit £60 billion within four years.

The cost of servicing the country’s £178 billion budget deficit represents just under double the annual budget for the Ministry of Defence. The figure is roughly double the current interest charges.

Mr Darling appeared before the cross-party committee – one of the most influential in Parliament – this afternoon. (more) 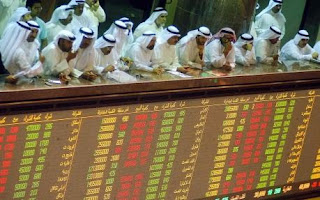 The move will give the hyper-rich club of oil exporters a petro-currency of their own, greatly increasing their influence in the global exchange and capital markets and potentially displacing the US dollar as the pricing currency for oil contracts. Between them they amount to regional superpower with a GDP of $1.2 trillion (£739bn), some 40pc of the world’s proven oil reserves, and financial clout equal to that of China. (more)

The U.S. government must craft a plan next year to get its ballooning debt under control or face possible panic in financial markets, a bipartisan panel of budget experts said in a report on Monday.

Though the government should hold off on immediate tax hikes and spending cuts to avoid harming the fragile economic recovery, it will need to make such painful changes by 2012 in order to keep debt at a manageable 60 percent of GDP by 2018, according to the Peterson-Pew Commission on Budget Reform.

Without action, investors could lose confidence in the United States, driving down the dollar and forcing up interest rates, said the former lawmakers and budget officials who crafted the report. That could cause a sharp decrease in the country's standard of living. (more) 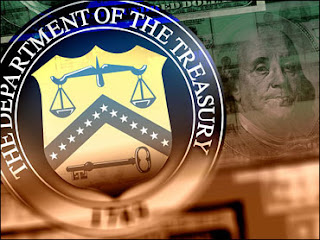 The latest calculation of the National Debt as posted by the Treasury Department has - at least numerically - exceeded the statutory Debt Limit approved by Congress last February as part of the Recovery Act stimulus bill.

The ceiling was set at $12.104 trillion dollars. The latest posting by Treasury shows the National Debt at nearly $12.135 trillion.

A senior Treasury official told CBS News that the department has some "extraordinary accounting tools" it can use to give the government breathing room in the range of $150-billion when the Debt exceeds the Debt Ceiling. (more)
at 3:38 AM No comments:

The underground or "black" economy is rapidly rising, and the fault is mainly due to government policies.

Here is the evidence. The Federal Deposit Insurance Corp. (FDIC) released a report last week concluding that 7.7 percent of U.S. households, containing at least 17 million adults, are unbanked (i.e. those who do not have bank accounts), and an "estimated 17.9 percent of U.S. households, roughly 21 million, are underbanked" (i.e., those who rely heavily on nonbank institutions, such as check cashing and money transmitting services). As an economy becomes richer and incomes rise, the normal expectation is that the proportion of the unbanked population falls and does not rise as is now happening in the United States.

Tax revenues are falling far more rapidly at the federal, state and local level than would be expected by the small drop in real gross domestic product (GDP) and changes in tax law that have occurred since the recession began. The currency in circulation outside the U.S. Treasury, Federal Reserve banks and the vaults of depository institutions - that is, the currency held by individuals and businesses - has grown by 13.3 percent in the last two years, while real nominal (not inflation-adjusted) GDP has not grown at all, and real (inflation-adjusted) GDP incomes have fallen by more than 3 percent. With the growth of electronic means of payment and financial service providers, it would be expected that the currency component of GDP would fall, not rise. (more)